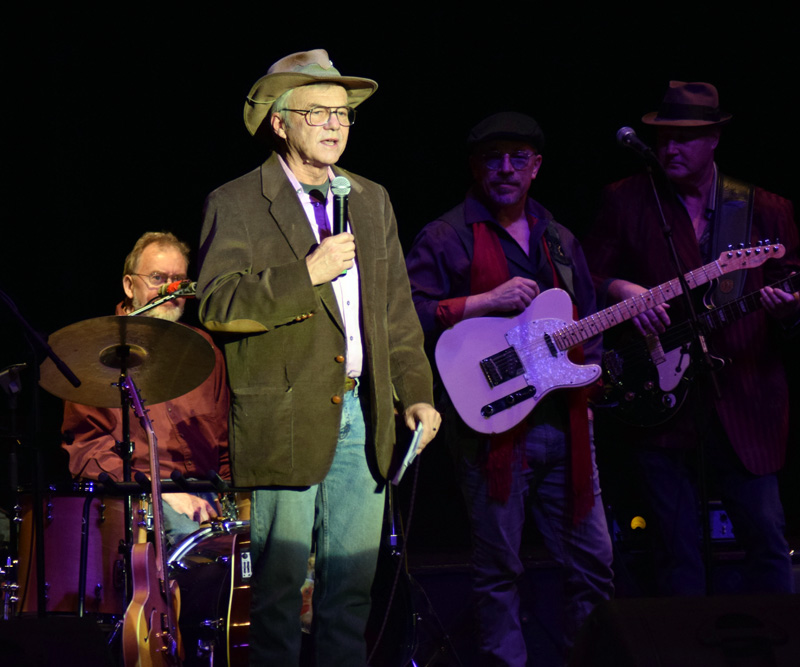 Larry Sidelinger, the president of Lincoln County Television, introduces the group of Maine musicians who performed a reenactment of the famous concert film “The Last Waltz” at Lincoln Theater on Sunday, Jan. 12. The concert was a benefit for the Newcastle-based public access station. (Evan Houk photo)

A group of talented Maine musicians had Damariscotta’s Lincoln Theater a-rocking and a-rolling during a reenactment of the “The Last Waltz” that doubled as a benefit concert for Lincoln County Television at 2 p.m. on Sunday, Jan. 12.

“The Last Waltz” is a 1978 Martin Scorsese documentary about The Band’s farewell concert that is widely regarded as one of the greatest concert films of all time. The original concert, which was held at the Winterland Ballroom in San Francisco on Thanksgiving night in 1976, featured a wide array of legendary guest performers, such as Eric Clapton, Bob Dylan, Neil Young, Joni Mitchell, and Neil Diamond.

Larry Sidelinger, the president of LCTV, introduced the show by thanking the concert’s sponsor, Renys; Andrew Fenniman, the executive director of Lincoln Theater; and Damon Leibert, the technical director at Lincoln Theater. Sidelinger also discussed some of the history of the Newcastle-based public access TV station.

Fenniman generously offered Lincoln Theater to LCTV for all four of its benefit concerts, which will take place over the next few months.

“I said to Andrew, we’ve got a problem. We’ve got a TV station that has been part of this community for the last 40 years. We’re down a little bit on our funds and we need to raise some money and right the ship, get back on an even keel,” Sidelinger told the crowd.

LCTV will host three more benefit concerts at Lincoln Theater this year, all at 2 p.m.: a Rolling Stones tribute on Feb. 16; a Woodstock tribute on March 22; and a Bruce Springsteen tribute show in April.

The hodge-podge of Maine musicians hailing from various bands, including The Boneheads and the Maine Dead Project, has been performing “The Last Waltz” together since 2011.

On Sunday, they nailed the original show note for note, performing some of The Band’s most well-known hits, as well as various cover versions of other artists’ songs. The musicians even introduced and performed with a stand-in for each one of the guest performers in “The Last Waltz” concert, some of them  performing more than one role throughout the course of the show.

The main “Band” consisted of Bobby Colwell and Justin Maxwell on keyboards, Robbie Coffin on electric guitar, Dick Hollis on drums, Steve Vallani on bass guitar, and Tim Sullivan on electric guitar. Each member took a turn impersonating one or more of the honored guests during the show, sometimes even switching instruments between songs.

The band began with a loping swamp-rock riff on The Band’s “Up on Cripple Creek” that got the packed house of around 220 moving in their seats.

The first guest was an impersonator of Ronnie Hawkins, the man who The Band first played together with as Hawkins’ backing band, The Hawks.

Pat Colwell portrayed Hawkins, leading the group in a rousing rendition of Bo Diddley’s “Who Do You Love?” Pat Colwell even stayed true to Hawkins’ dialogue in the movie, shouting “big time!” before he started singing.

During the cover of Neil Young’s song “Helpless,” Katie Daggett took the stage for the first time, standing in as the famed singer-songwriter Joni Mitchell. Bobby Colwell explained after the song that in the film “The Last Waltz,” Mitchell actually stood backstage while she sang backup on “Helpless,” so the crowd wouldn’t know she was there yet.

“But we didn’t have enough microphones,” Colwell said to laughs, so Daggett took front and center stage.

Rusty Diamond, portrayed by Josh Robbins, belted out a solid and convincing vocal performance during Neil Diamond’s “Dry Your Eyes,” despite his disheveled and unsteady appearance.

Next was the official introduction of Joni Mitchell to the stage, with Daggett coming back out to perform a jazzy version of Mitchell’s “Coyote.” Daggett went around the entire stage kissing and hugging each band member, true to “The Last Waltz” film.

“If you watch the movie, Joni kisses and hugs everybody, including the audience,” Bobby Colwell said.

Daggett played an impressive acoustic guitar as her beautiful soaring voice was able to effortlessly conform to the sporadic rhythm of the song.

After the 10-minute intermission, Pat Colwell once again took the stage to lend his booming growl to the classic blues numbers “Mannish Boy” and “Mystery Train,” impersonating the special guests Muddy Waters and Paul Butterfield, respectively.

The two electric guitar players, Robbie Coffin and Tim Sullivan, portrayed a pair of dueling Eric Claptons during a steaming-hot rendition of Bobby “Blue” Bland’s “Farther Up the Road.”

The two were trading scorching blues-guitar licks just like Robbie Robertson, The Band’s lead guitarist, and Eric Clapton did on stage during “The Last Waltz.” Several people were up and dancing off to the side of the stage at Lincoln Theater for this up-tempo blues number.

Colwell switched roles to fill in as Van Morrison for a rollicking version of “Caravan.” Once again, true to the concert film, all the band members began imitating “Van the Man”’s triumphant leg kick toward the end of the tune.

“You didn’t know you were going to see the Rockettes too, did you?” one of the band members remarked to laughter.

Next came Bob Dylan — or at least Bob Dylan’s hat.

Electric guitarist Tim Sullivan donned a feathered fedora to lead the band in Dylan’s “Forever Young” and “Baby, Let Me Follow You Down,” adding a Dylanesque twang to his voice for the numbers.

Finally, everyone filtered out onto the stage for the grand finale, a sing-along performance of Dylan’s “I Shall Be Released,” which received a standing ovation. This is how the film “The Last Waltz” ends, but guests at Lincoln Theater were treated to one more song.

The band stayed true to the original order that the songs were placed in for the film, only switching the opening song of the film, “Baby Don’t You Do It,” to its proper place at the close of the show, when the band originally played it on that special Thanksgiving night in 1976.

To buy tickets for any of the upcoming concerts, contact LCTV at 563-6338 or lctv@tidewater.net. Tickets are also available at Cupacity and S. Fernald’s Country Store in Damariscotta, from LCTV board members, and from Bobby Whear, the co-host of the long-running LCTV show “Wuzzup News.”