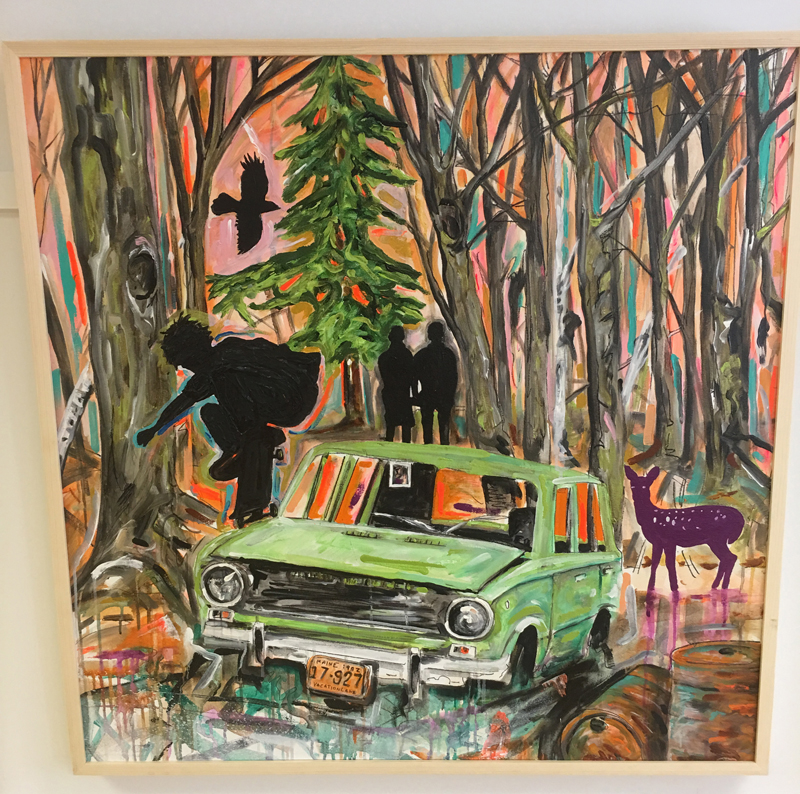 Every once in a while, an artist comes along whose work captures something about the world in such a refreshing, enlightening way that one is forced to simply stop and look and just say “wow!” The paintings of Bremen artist Michael Blaze Petan fit into this exclusive category. Petan’s must-see “My Neck of the Woods” show currently hangs on the walls of the West Gallery at River Arts in Damariscotta through Wednesday, July 12.

Petan’s work is not necessarily pretty, but it is powerful and beautiful – and essential viewing for anyone wishing to have a deeper understanding of the Maine that is not often seen by tourists. It is likely the fact that Petan was born and raised in Chicago that gives him a viewpoint that is different from, say, a native Mainer or someone who hails from a less intense environment. It is also likely that Petan is just one of those people who comes along once in a while and sees the world with unique eyes. It is probably both, and then some, including his training at the Art Institute of Chicago, that make him the artist that he is. 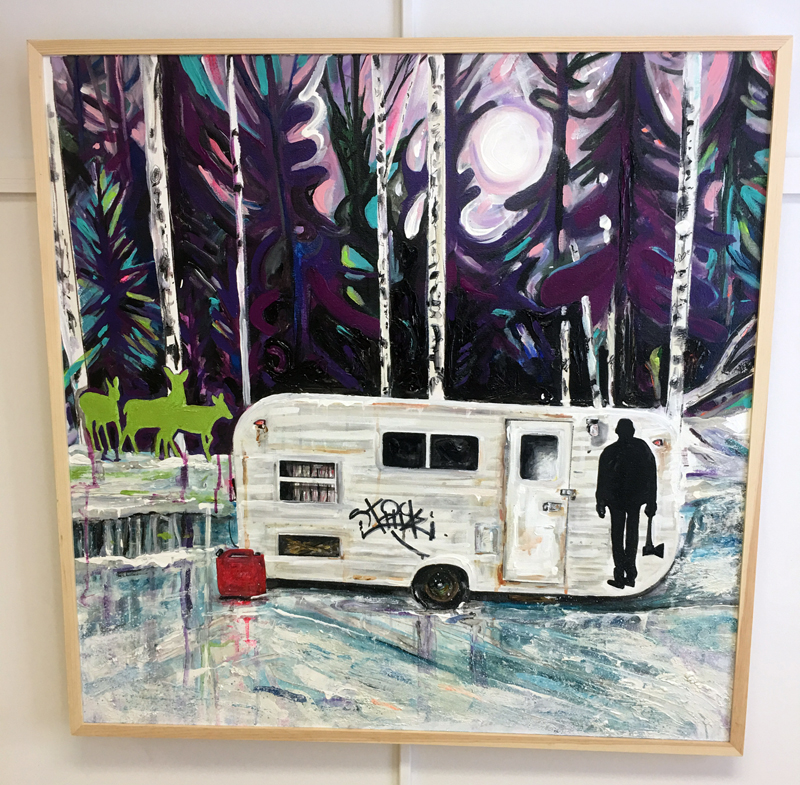 “So I Married an Ax Murderer,” by Michael Blaze Petan. (Christine LaPado-Breglia photo)

“So I Married an Ax Murderer” is a mixture of striking beauty and unsettling harshness. A lovely abstract sky and woods, pierced through by the moon, serve as the backdrop for a small trailer in the frozen woods tagged with graffiti. A dark silhouette of a man carrying an ax stands off to the right. Whether he is simply a “murderer” of trees or a real ax murderer, we have no way of knowing. He also could just be a painting of a man on the side of the trailer, considering the placement that Petan has given him. The lime-green silhouettes of deer linger nearby. All the components of this piece carry equal weight in this wonderfully composed piece. All are equally a part of this Maine landscape.

“Ollie in the Woods” features a silhouetted skateboader doing a move called an “ollie” off the side of a pale-green car parked deep in the woods. A purple silhouette of a deer stands nearby, a spectator to the skateboarder’s actions. The silhouettes of two people stand behind the car, also seemingly watching the action. Petan captures both action and the peaceful-yet-disquieting stillness of the Maine woods in this vibrant piece.

A large purple silhouetted moose occupies much of the foreground of “In the Still of the Night.” The moose is illuminated by the headlights of a car shining on it. A person stands next to the car, which seems to be stopped on the road, forcing the viewer to wonder what this person is thinking and about to do. As in most of Petan’s work, his use of silhouetted people and animals forces the viewer to question what is real and what is not, what one should pay close attention to and what one should just take in stride. In the case of the real/not-real moose, Petan subtly gets across the double-sided point that in Maine one takes moose in stride, as there is always the possibility of seeing one, and one must pay close attention if one does run across a moose, especially on a lonely road at night. 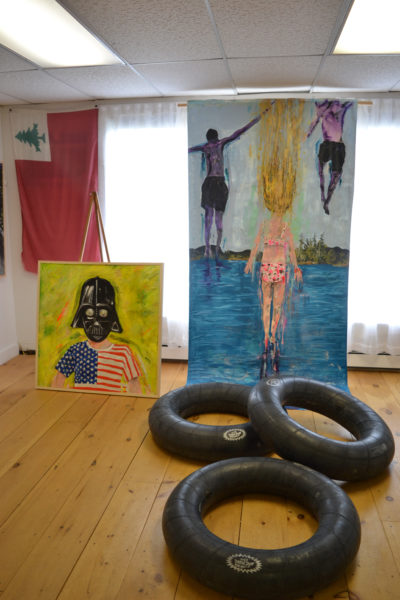 A huge painting of kids jumping into water, complemented by a trio of inner tubes, stands to the right of “The Farce is with You,” at Michael Blaze Petan’s current show in the West Gallery of River Arts in Damariscotta. (Christine LaPado-Breglia photo)

Other pieces are slightly more whimsical, yet possess a darkly thought-provoking quality that exemplifies Petan’s work. “The Last Lobster Boy,” of a lobsterman standing before what appears to be a red tide and wearing a black T-shirt with a skull and crossbones on it, is one such piece. Ditto for “The Very Last Supper,” a colorful bird’s-eye still life featuring a fish, two lobsters, shellfish, lemons, a cigarette, and a gun.

Petan’s work is not to be missed if one wants to be gob-smacked in the best way by the iconography of the darker – yet captivating – side of the Pine Tree State.