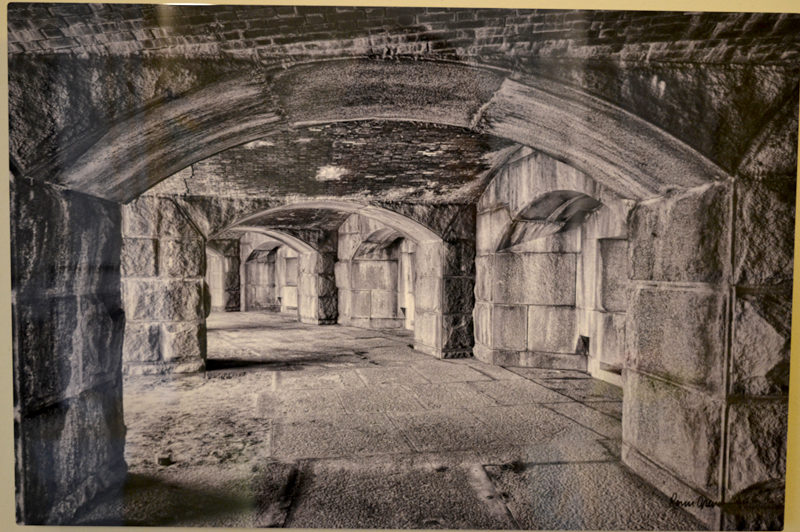 Damariscotta photographer and Selectman Ronn Orenstein, who is known for his commercial photography work, has been branching out of late into photography as art. His exhibit of artistic photographs, titled “Illuminations,” currently graces the walls of Savory Maine Dining & Provisions in Damariscotta.

“Under a Blanket” hangs just inside the front door to the restaurant. The 18-by-12-inch black-and-white photograph of evergreen trees standing alongside a riverbank, their branches weighed down with snow, achieves a lovely crispness due to Orenstein’s choice of material on which to print it: high-definition aluminum.

Below “Under a Blanket” hangs another striking 18-by-12-inch black-and-white photo on high-definition aluminum, “Fort Popham.” The subject of “Fort Popham” is a Civil War-era granite fort in Phippsburg. Orenstein’s choice to shoot the photo from inside Fort Popham, focusing on its arched tunnel-like passageways, gives the piece the feel of a drawing by the late Dutch artist M.C. Escher, known for his mathematically inspired art featuring such things as buildings containing series of “impossible” staircases that could not actually exist in real life. The fact that the photo is in black-and-white only adds to the Escher effect.

Hanging close by are three small square color photos, also on high-definition aluminum, titled “Vacation Day I,” “Vacation Day II,” and “Vacation Day III.” They are extreme close-ups of boats and have a painting-like quality, due in part to the paint-spatter effects that Orenstein has added in production.

The bulk of Orenstein’s pieces hang in the restaurant’s dining room. “Upstairs Downstairs” is a framed photograph printed on archival luster photo paper of an old, curved stairwell, perhaps taken inside a lighthouse. “Gone Fishing,” described as a “digitally altered canvas,” depicts a fishing boat and its reflection in the water. Hints of lines like those on a map are visible in the background, and Orenstein has used a paint-spatter effect similar to that of his “Vacation Day” series. Another digitally altered canvas, “Harbor Fog,” of three boats in a harbor in fog, strongly resembles a painting.

“The Unmoved” is a tranquil vertical shot on high-definition aluminum of autumn leaves, pine needles, and other debris caught in a still spot in a stream. Similarly, the horizontally shot “Isolated” features leaves and debris caught on a rock.

Orenstein offers the viewer the beauty of fall in two more photographs, these framed and printed on archival luster photo paper: “Black Velvet” and “Frodo Lives.” “Black Velvet” is a pretty photograph of orange, red, and yellow leaves stuck at the top of a small waterfall. “Frodo Lives” – a nod to the J.R.R. Tolkien character Frodo Baggins – is a beautiful shot of the deep woods in all its autumn glory. In it, the viewer can see between two trees in the foreground to a terraced stream and more forest in the background. 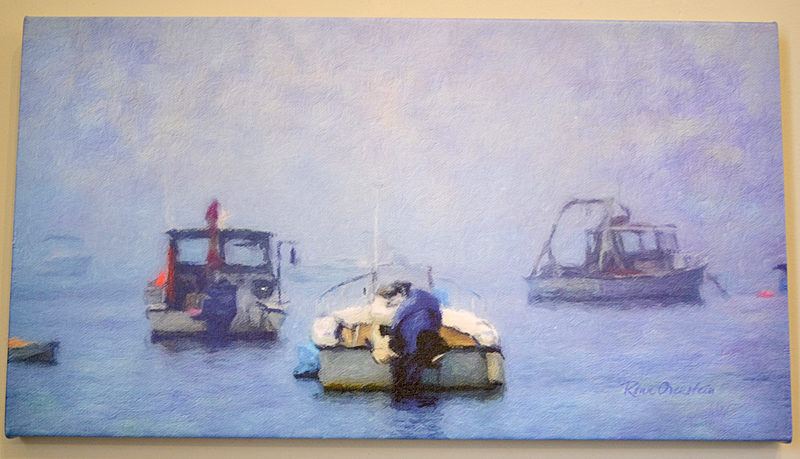 It is obvious that Orenstein takes great care to present each photograph of his in its best light – in other words, using materials most conducive to the mood he is trying to set. This is very apparent in his choice to use archival matte (not luster) photo paper for “The Overlook” and “The Gut.” His use of matte paper for “The Overlook” adds to the hazy, dreamy quality of this photo of an old rowboat overturned in colorful fall grasses alongside a body of water with trees in the distance. The same goes for the amplification of the fogginess of “The Gut,” a shot of boats in a working harbor.

Orenstein’s largest piece in the show, the 30-by-20-inch “Lighthouse Glow,” on high-resolution aluminum, is an eye-catching photograph of the Pemaquid Point Lighthouse taken at sunset. The oranges and yellows of the setting sun and the yellow glow of the lighthouse’s light contrast beautifully with the darkening deep-blue sky.

Even when one visits the bathroom at Savory Maine, one is greeted by Orenstein’s fine work. “Alewives,” one of four Orenstein photographs on the restroom walls, is a stunning color shot on high-definition aluminum of dozens of little fish swimming in a group, again creating a pattern not unlike an Escher drawing. “Ocean Remnants II,” a framed photograph on archival luster photo paper of two mussel shells on a sandy beach, is delicate and lovely. In it, Orenstein has captured the graceful, meandering furrows created by the tide going in and out over the shells. The photo is a delight to spend time pondering.

An opening reception for Orenstein’s show will be held at Savory Maine, which is located at 11 Water St. in Damariscotta, from 3-5 p.m., Friday, Oct. 28. His “Illuminations” show runs through Tuesday, Nov. 29. Savory Maine is open daily from 11 a.m. to 8 p.m.

Go to ronnorenstein.com to learn more about Orenstein and his work, both commercial and artistic.