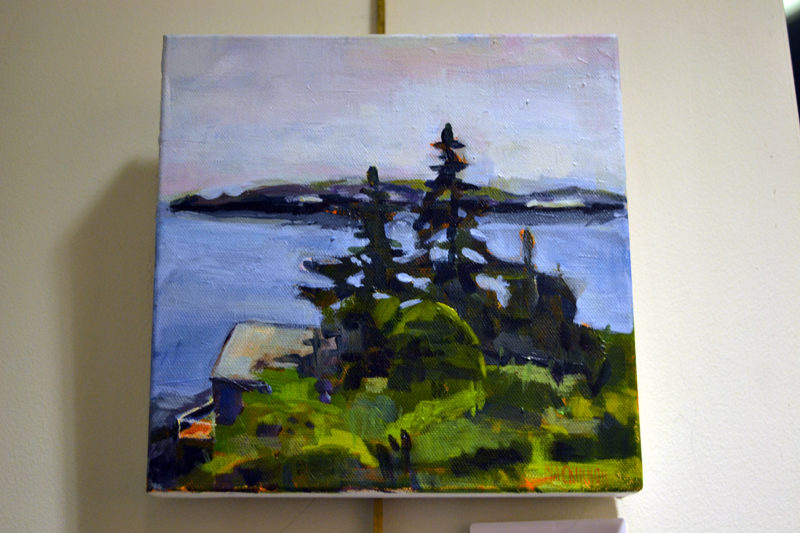 Nine small Maine-landscape paintings by Klein hang on the wall to the right as one enters the library from Elm Street. “Geranium” depicts a tranquil scene of a porch overlooking a body of water on which there are sailboats. Interestingly, Klein titles the painting after a relatively small feature – a hanging basket of geraniums on the porch.

She makes a similar move in her naming of another of her pieces, “Blue Barrel.” The blue barrel of the title is again a relatively small aspect of a painting that is largely focused on a shack-like building with a brilliant orange roof and pilings situated near the water’s edge. Klein’s choice to name these paintings in this way effectively draws the viewer’s eye to search for the detail that she has named in the title. 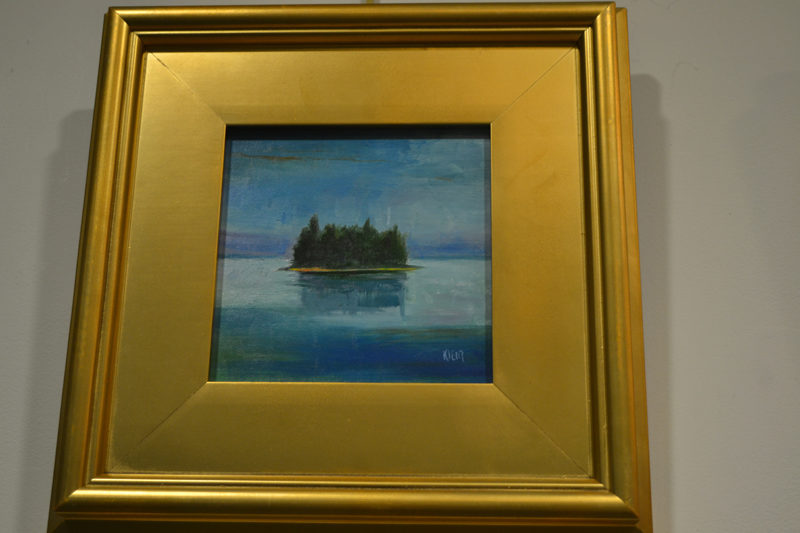 Klein’s “Island Sunset” – the entire painting rich in reds, oranges, and deep yellow – pictures a small forested island in the center of a body of water. If not for a thick blackish horizon line dividing the sky from the water, it would be difficult to differentiate one from the other, as Klein has nicely used sunset colors for both.

“Blue Sky,” hanging nearby, is a seeming companion piece for “Island Sunset.” It, too, depicts a small island in water that matches the color of the sky, except that in this painting the colors are various blues, just the opposite of the warm oranges used in “Island Sunset.”

Applegate’s pieces in this show are all giclee art prints – fine-art reproductions – of her finely crafted oil paintings. “Safe Harbor” pictures two lobster boats moored in a peaceful cove. The homey “September Song” looks in on the interior of a house, focusing fairly closely on a container of yellow flowers on a table placed in front of a china cabinet. “Country Morning” pictures another house interior, this view encompassing a wider area that takes in a window looking onto the outdoors, two vases of flowers, and a bowl of red fruits that might be apples.

MacKinnon weighs in with a number of eye-pleasing acrylic paintings, including four 6-by-6-inch somewhat abstract paintings of flowers in small vases – “Love My Blue,” “Happy,” “Lovely Bunch,” and “The Girls Love You.” Curiously, “Love My Blue” features no blue flowers – only red, orange, white, and pink ones. The background of the painting, however, is a deep blue. Near MacKinnon’s flower paintings hang three lovely, unframed 8-by-8-inch acrylics of local coastal views – “Island View,” “Monhegan View III,” and “Pemaquid Beach.” 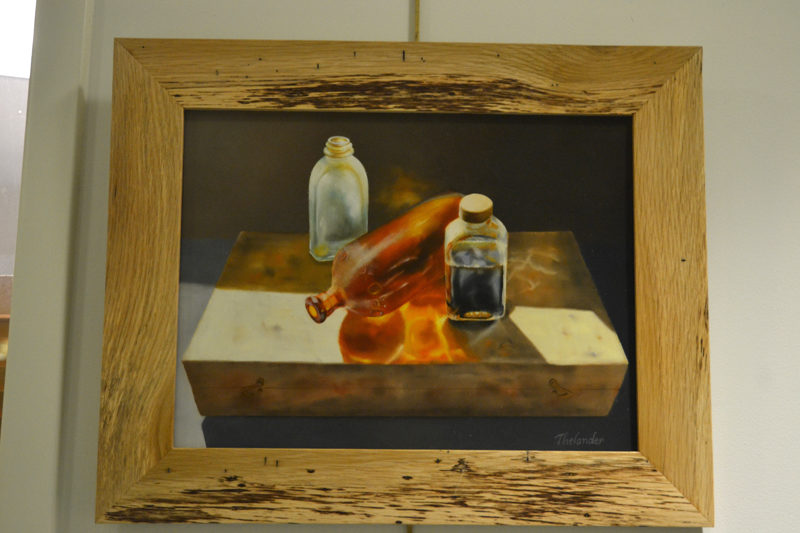 “What’s in the Box?” is a meticulously created oil painting by Liliana Thelander, one of a number of her paintings on display in The Carey Gallery at Skidompha Public Library through Saturday, Dec. 31. (Christine LaPado-Breglia photo)

It is the work of Thelander, who was born in Caracas, Venezuela, that is perhaps the most striking in this show. Thelander’s “What’s in the Box?” – of three glass bottles atop a wooden box – showcases her talent for detail and her ability to perfectly capture both the transparency and the translucence of glass as light passes through it. Likewise, in “Blue Reflections,” Thelander excellently depicts seven bluish glass orbs of different sizes sitting on a flat surface; the spheres interestingly cast reflections on a surface depicted near the bottom of the painting.

“Crow III” is a beautiful depiction of a jet-black crow against a dark blue-gray background. In this painting, Thelander captures both the beauty and the intent seriousness of the bird.

Thelander’s “Pemaquid Lighthouse” – an oil painting of the iconic lighthouse as seen from across water and a rocky beach – captures the gravity and majesty of the scene, which is added to by her choice of a dark-mahogany frame. Her “Poppies” is lighter fare – a delightful painting of poppies, some with pink petals and some that have lost their petals. Thelander’s choice of a “serious” dark-brown wooden frame for this piece nicely offsets the delicacy of the subject matter.