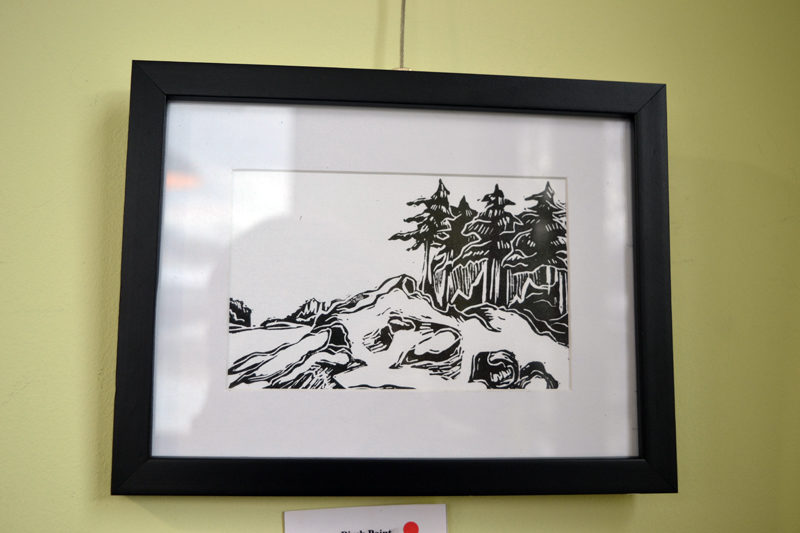 Polly Peckenham’s “Birch Point” is on display in the cafe of Rising Tide Community Market in Damariscotta through Tuesday, Feb. 28. (Christine LaPado-Breglia photo)

Local artist Polly Peckenham’s show of what appear to be linocut prints, along with several color photographs, on the walls of the cafe at Damariscotta’s Rising Tide Community Market is definitely worth a good, long look over a bowl of hot soup or a cup of organic coffee. Her prints, which are not labeled as to their technique, are eye-pleasing. Some are one-color prints and others feature two or more colors, a testament to Peckenham’s skill at printmaking.

“Birch Point” is a lovely, small black-on-white-paper print of trees along rocky coastline. The ruggedness of the scenery is nicely emphasized by the rugged, woodcut-like simplicity of the print and the artist’s decision to use only one color, the traditional black. “Flags,” a small one-color print of rows of triangular flags in Kelly green, hangs above “Birch Point.” 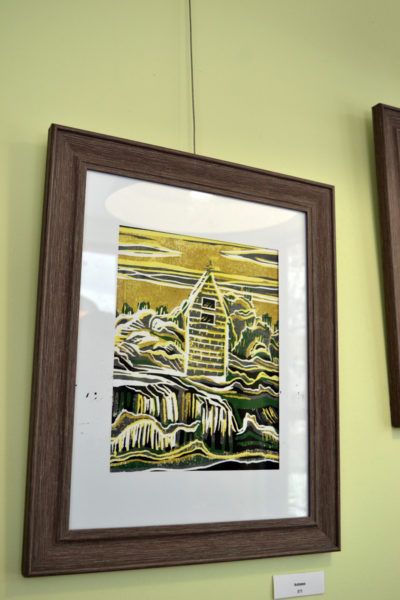 “Autumn” is a five-color print of a little brick building sitting amid a landscape featuring sky, trees and/or hills, and a cliff and/or flowing water. The ambiguity of the piece’s landscape nicely allows one’s imagination to fill in the details.

Peckenham’s small print in green and goldenrod called “Newcastle” is of the town’s Second Congregational Church. Her choice to use colors that are not the colors of the actual church and to not name the church in the piece’s title is a good one as it draws one’s attention to study the details of the piece to determine which building is actually being represented.

Peckenham has included two larger, four-color prints using the same printing block, “Blankets (green)” and “Blankets (red),” of blankets hanging on an outdoor clothesline with trees in the background. Both employ the colors black, dark tan, and gray, but whereas “Blankets (green)” features green as its fourth color, “Blankets (red)” uses, of course, red. It is a nice move on Peckenham’s part and allows the viewer to appreciate the effect that simply changing one color can have on the feel of a piece of art, especially in this case the switching out of two complementary colors such as red and green.

Two of Peckenham’s multicolor prints, “Blue Hill” and “From the Breakwater,” are pretty but look as though some details may have been added with a brush.

The four photographs that Peckenham chose to include in this exhibit seem out of place. For one, they are not of the same quality as her prints, seeming more like nice photos from a vacation. One of them, “Fog, Quaggy Jo,” seems to be included for its abstract representation of fog but fails as it lacks that certain something that puts it over the line into the realm of art. As it is, it comes across as merely another interesting vacation photo.

Secondly, the show would have been stronger if it were focused only on prints. Besides the fact that printmaking seems to be Peckenham’s forte, the show would feel less crowded if the photographs were absent. Along those lines, it would also be nice if pieces at this venue, especially those along the wall facing the interior of the market, were generally hung a little lower on the wall. For one thing, it would make it easier for a reviewer to photograph them.

Also, it would have been helpful to have had an artist statement available in order to know what town Peckenham lives in and something about her artistic process.