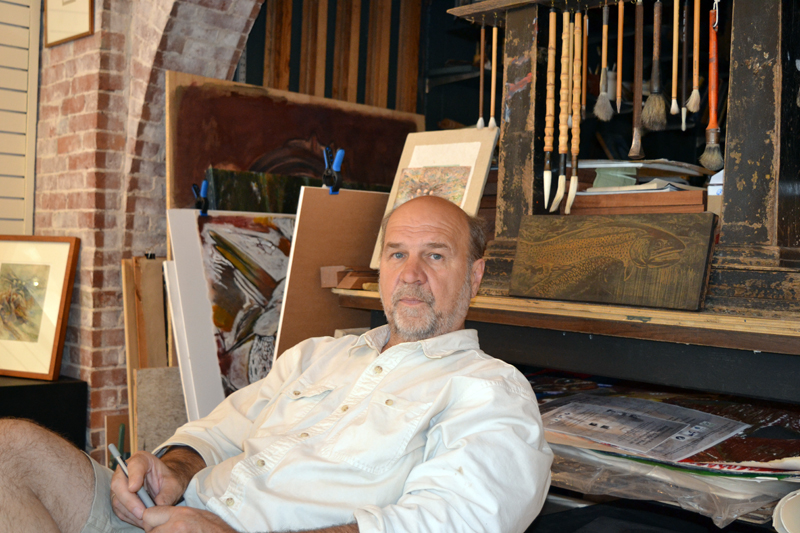 If one Googles the term “fine art,” one comes up with two definitions: 1) “creative art, especially visual art, whose products are to be appreciated primarily or solely for their imaginative, aesthetic, or intellectual content,” and 2) “an activity requiring great skill or accomplishment.” The work of Wiscasset artist and master printmaker R. Keith Rendall qualifies as fine art on both accounts. His meticulous copper-plate etchings of landscapes are fascinating; his paintings are colorful, imaginative, and playful; and his massive woodcuts of wildlife are no less than stunningly beautiful.

“Noli Me Tangere” – the title is Latin for “touch me not” – is a large framed woodcut print in black, white, and blue-green of a snapping turtle that hangs in Rendall’s gallery, Rendall Fine Art, in Wiscasset. It took Rendall approximately seven to eight months to make from start to finish. In it, the turtle swims straight for the viewer, its nose above the water line for air. Rendall captures both the menacing quality and the beauty of this dinosaur-like creature with long, sharp claws. Similarly, “A Cupsuptic Crossing” – a very large, floor-standing graphite-ink woodcut of three moose in a river – impresses the viewer with its size, detail, and highly accurate portrayal of animals in their habitat.

Rendall, a New Jersey transplant, said he owes his keen eye for nature to his childhood days of spending summers in Maine, immersed in the environment of the Rangeley Lakes area. “I used to just love going out into nature. I would try to get lost in the woods,” the 61-year-old said in a recent interview at his gallery, adding that all of his art, whether created from memory or direct observation, is “totally Maine-inspired.”

Notably, all of Rendall’s work derives an undeniable strength from what Rendall calls “the power of the line.” 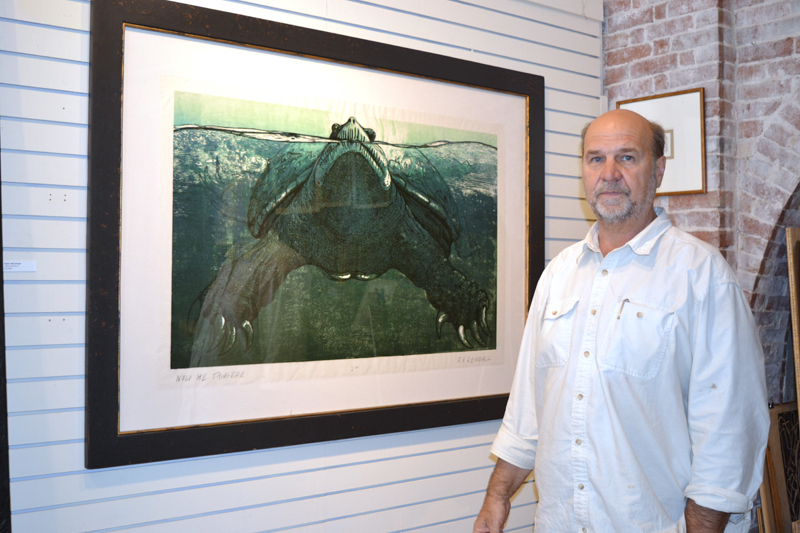 Wiscasset artist R. Keith Rendall stands before his large woodcut of a snapping turtle, “Noli Me Tangere,” which took him about seven to eight months to create. (Christine LaPado-Breglia photo)

As a younger man, Rendall studied the etchings of Dutch painter and etcher Rembrandt van Rijn. “Rembrandt’s use of line is so suggestive of movement,” said Rendall. “I love his use of line.”

Inspired by the possibilities of line, Rendall has devoted his many years of being an artist to making the line serve what he is trying to get across in his work. “When I’m drawing a shell, there’s something about the simplicity of the line that I have to get perfect before I go ahead with the work,” he said. 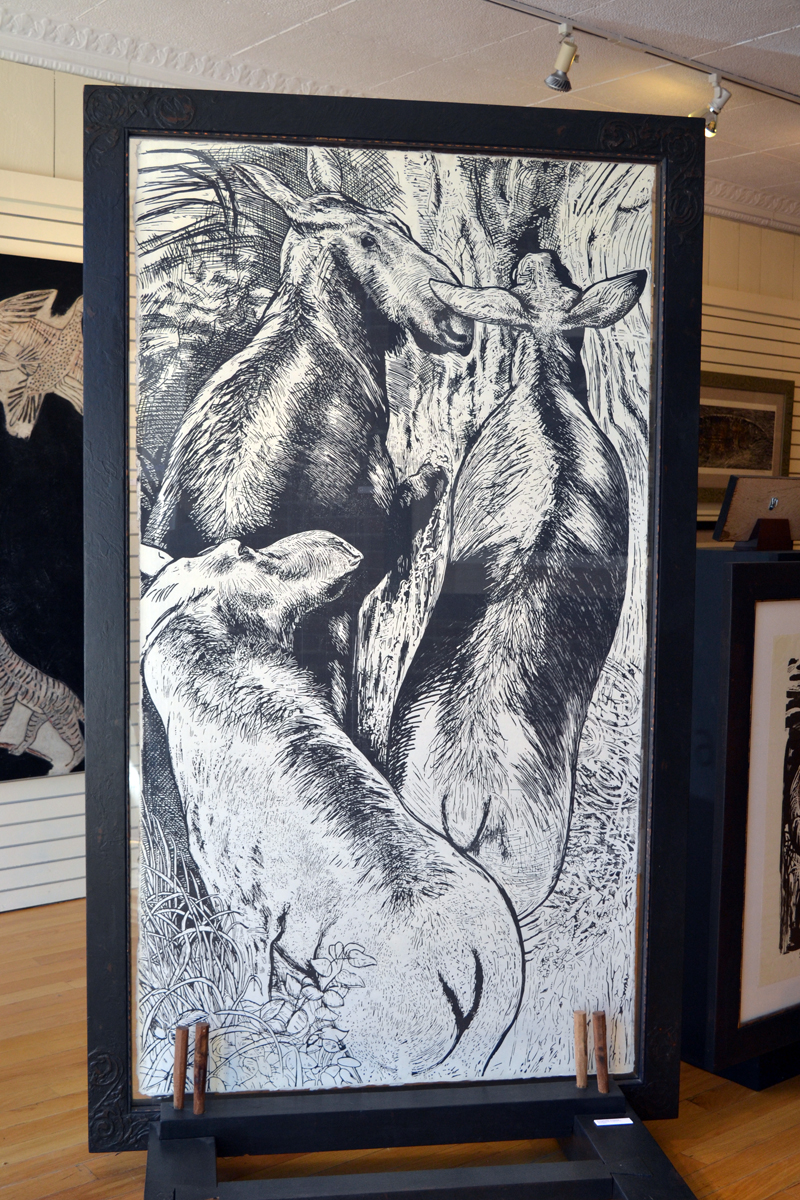 Rendall has a well-honed ability to work a type of magic with line. “I can make black look like color,” he said. “I can suggest motion. … With my etching, I want to prove that I have control over people’s perceptions, their emotions, with line.”

In one of his etchings of a seemingly mundane subject, “Compost Pile,” Rendall creates incredible beauty through his use of line. Most notably, he creates the impression of standing water in the foreground of the etching solely through his mastery of line. A lesser artist could not achieve this level of subtlety.

Despite Rendall’s remarkable ability to manipulate line, he also allows for – and relishes – the unexpected in his process of creating art. His best work, he said, without going into detail, has been “a combination of pure line and the unexpected, the accidental thing that would happen.”

Rendall said that he likes working in series – shells, skulls, birds, forest animals, sea life, and so on. “Having my own gallery space enables me to do a number of series. It’s like a living workshop for me. I can experiment, take liberties,” he said. Currently, Rendall is working on a series of rather abstract paintings of various local birds.

Rendall, who used to teach art at Lincoln Academy in Newcastle and at the University of Maine at Farmington, teaches printmaking, etc. in the workshop at the rear of his gallery and at his Federal Street studio. “I love teaching students,” he said.

At one point in the interview, Rendall walked over to “Eider Ducks,” a very large, floor-standing woodcut in black, white, and sky blue of ducks he watched on a body of water in South Portland, and offered insight into one of his artistic “secrets.” The ducks, in crisp, black detail, swim in blue-and-white water that has a sort of dreamy appearance, just the opposite of crisp and sharply defined. Rendall said he achieved this lovely effect of sun sparkling on water by – incredibly – coming up with the idea of creating a woodcut of the water on the back of the paper and letting it bleed through to the front, where he printed the ducks. He was seeking “a kind of softness,” he said. The overall effect is exceptional.