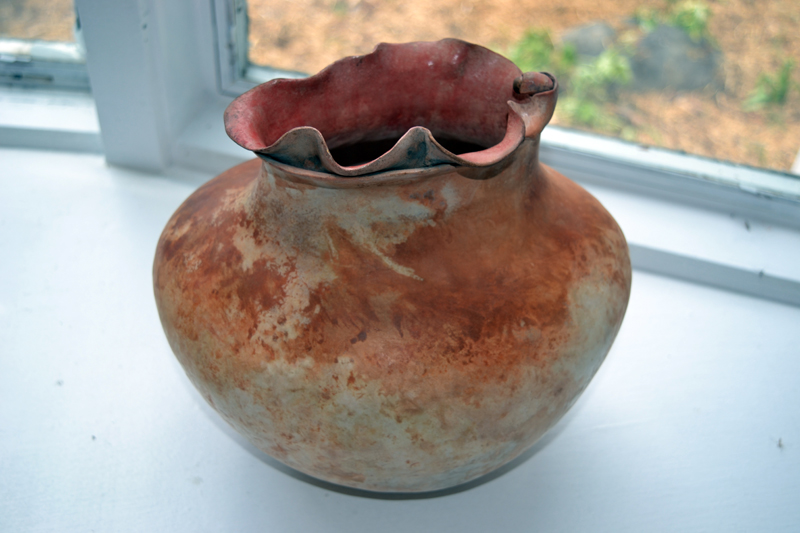 A feast of approximately 80 pieces of artwork – from photographs to paintings to pottery to assemblage pieces – populates the current member show at River Arts gallery in Damariscotta. While this may sound like a lot to digest – and, in a sense, it is – the number of pieces on display at the gallery is less than would have been displayed in the past, thanks to the keen organizational eye of Alice de Mauriac and her husband, Julio Sanchez-Banos, who began hanging all of the River Arts shows last fall.

Sanchez-Banos and De Mauriac, a painter from Pemaquid who also has work in the River Arts show, have a knack for coming up with the most effective way to hang a show of such variety. In addition to keeping things looking uncluttered, they tend to organize pieces into color-coordinated arrangements. On one wall near the entrance to the gallery hang pieces in shades of blue, such as Brunswick artist Ed McCartan’s painting “Ed’s Blues” and Damariscotta painter Polly Steadman’s pleasing abstract piece in oil titled “Sonata.” 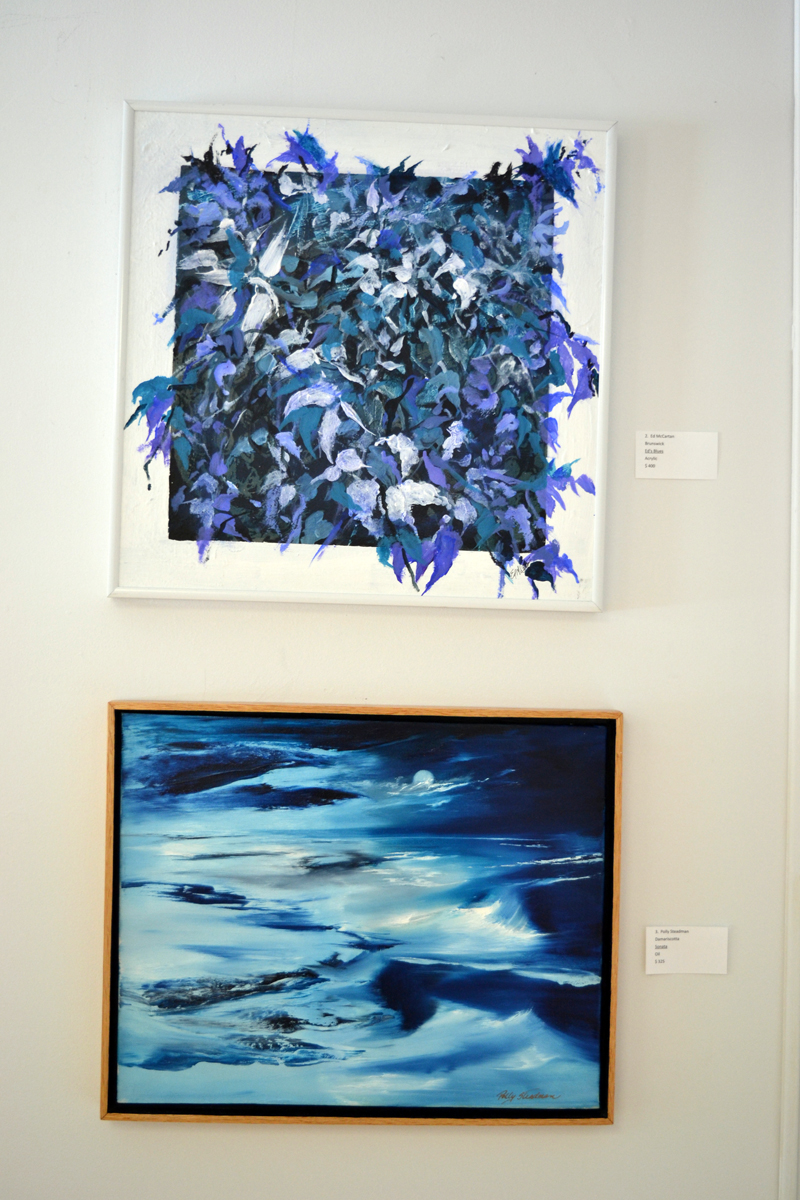 Near the “red wall” hangs Portland sitarist and painter David Pontbriand’s darkly inviting abstract painting “Arveil.” Not far from “Arveil” is Brunswick painter Monika Kirtland’s small acrylic painting “Ocean,” in blues and greens. “Ocean,” interestingly, evokes a feeling that one is looking at a volcano of sorts, with its peaking waves that explode into foam.

Recent California transplant Valerie Greene, now of Waldoboro, weighs in with an eye-catching encaustic mixed-media piece called “As Still As Life Can Be,” featuring a cat, a bird, some grapes, and a bunch of flowers, all sitting on a wooden table. The clever title of the piece makes one think about what one is viewing: how exactly can a cat and a bird be a part of a still life? But the colorful piece, however improbable, works. 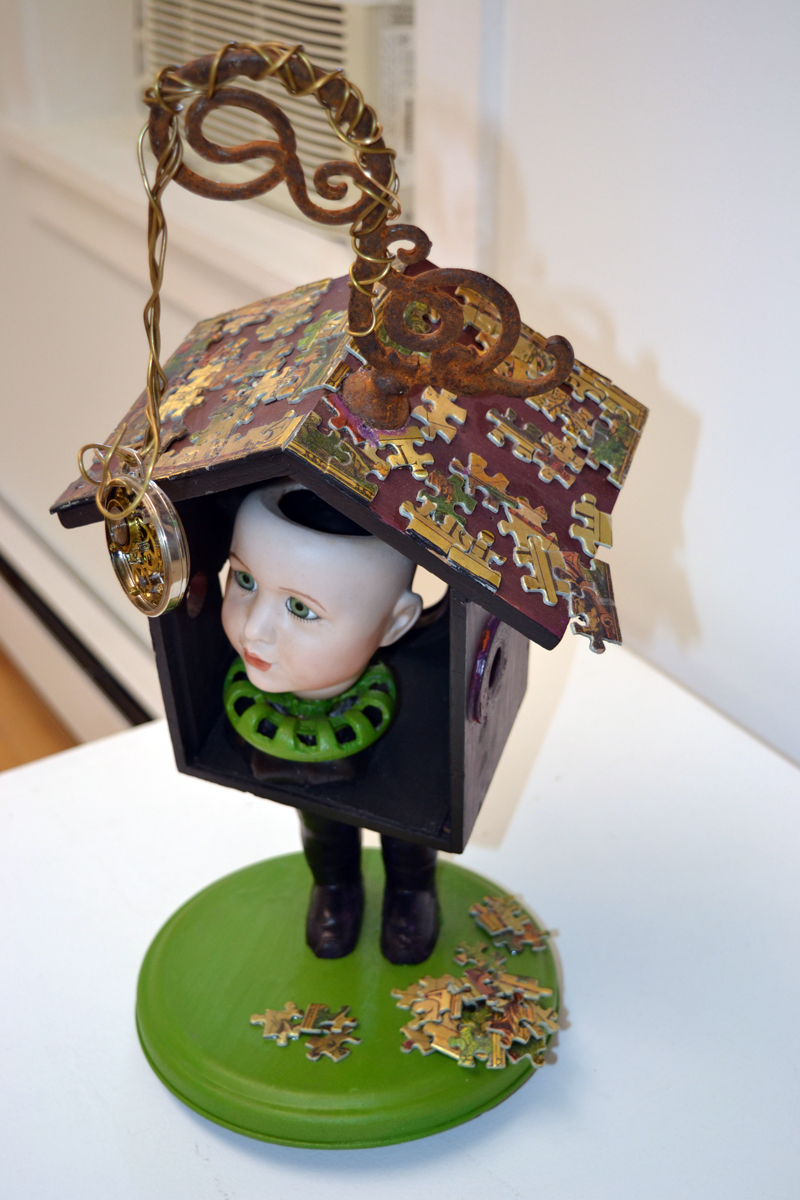 Making one’s way toward the back of the main gallery, one passes Bowdoinham artist Howard Solomon’s playful standing assemblage piece, “Time, You Thief,” created using found objects. Hanging near Solomon’s piece is “Standing There,” a lovely, quintessentially Maine painting of trees by Sarah Wilde, of Walpole.

Orr’s Island ceramicist Catherine Gibson’s finely crafted and suggestive “Yoni Pot #4” is on display in the bay window of the gallery’s middle room. Edgecomb artist William Anthony’s beautiful gouache depicting a horseshoe crab stands on a small easel in this same area. Kudos to de Mauriac and Sanchez-Banos for placing some of the show’s more detailed and delicate-looking pieces in this light-filled area, allowing the viewer to more easily see and appreciate the work of the artist.

Across from the bay window hangs Topsham painter Bev Walker’s whimsical, colorful painting of a scarecrow-like woman called “Pretty Woman.” Near Walker’s piece is Lincolnville artist Petrea Noyes’ intriguing, large mixed-media-on-canvas piece called “Ariel No. 2.” Noyes’ work – and this piece is no exception – is reliably multilayered in its imagery and refreshingly imagination-stimulating. “Ariel No. 2” conjures up images of transportation – a boat, a race car, a helicopter perhaps – but one cannot be certain of what is being viewed, and that is part of the joy of studying the piece.

Bristol artist Dianne Dolan’s oil painting “Lingering,” focused on two round boulders and an expansive pink sky, is a beautiful homage to the loveliness of just the sky and a couple of rocks. And one cannot but help love Boothbay artist Mark Reilly’s “Mr. Moose,” a slightly imposing, large acrylic painting of a moose eating vegetation in a meadow in the woods.

The current River Arts member show succeeds on so many levels.