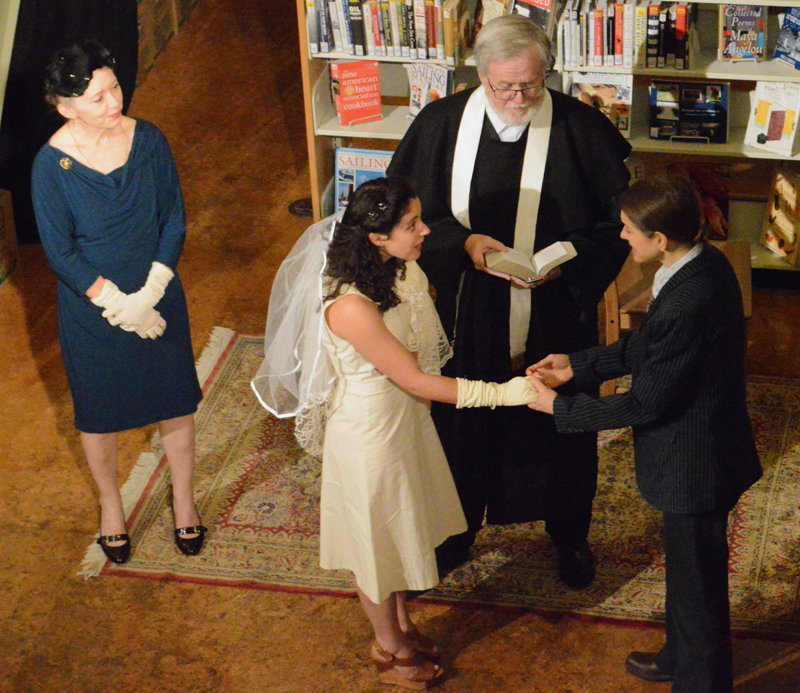 The eventual happy ending of the River Company production of “Much Ado About Nothing” at Skidompha Library on July 26 is a wedding between Rachel Kaplan’s Hero (left foreground) and Amy Holt’s Claudio (right foreground). Christine Anderson (back left), portraying Donna Leonora, Hero’s mother, and the Friar, played by Michael Powers (back right), look on. (Evan Houk photo)

The well-known Shakespeare play “Much Ado About Nothing” could be interpreted as a very early version of the sitcom “Seinfeld,” the show about nothing that some consider the funniest show in television history. The production really is about nothing, or more accurately “noting,” which is a term from Shakespeare’s day that means “gossip, rumour, and overhearing,” according to Claire McEachern’s scholarly Arden Shakespeare introduction to the classic.

The title itself is a play on words, as “noting” was pronounced or often heard as “nothing” in 17th century England.

Damariscotta-based River Company’s modern interpretation of the comedy, like “Seinfeld,” certainly delivers on the laughs.

The stage play meanders its way along, searching for true love constantly in all the wrong places. True love is sparked by subterfuge and nearly destroyed by subterfuge, while all throughout hilarity and outsized misunderstandings ensue.

The whiplash nature of this comedy and its dialogue is conveyed with poise and grace by Skidompha Library’s theater in residence, River Company, now in its 22nd season.

On opening night, Friday, July 26, situated in front of the great stairs in the middle of Skidompha Library in Damariscotta, director Torie DeLisle quickly introduced the play for the sold-out crowd of around 40.

“This play to me, the characters have always spoken to me. And I feel like they are just so real in their passions, and their foibles. And maybe they can remind all of us to have a little patience with each other from time to time. That’s a good lesson,” DeLisle said. 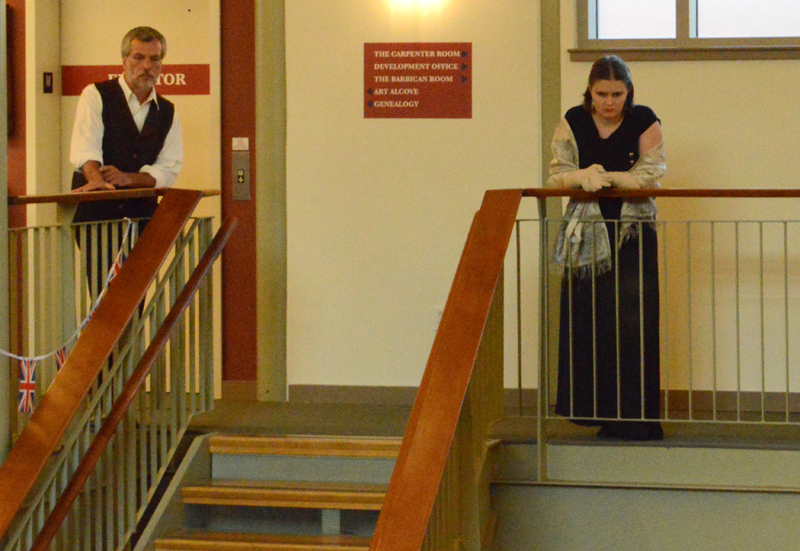 Borachio, played by Sumner Richards, and the classic villain Donna Pedra, played by Andrea Handel, plot the ruination of Hero and Claudio’s love high above the action at the base of the staircase at Skidompha Library in the River Company production of “Much Ado About Nothing” on Friday, July 26. (Evan Houk photo)

The music set the mood from the beginning. An easy-listening jazz record played, sounding like it was being broadcast straight out of the mouth of a victrola. The music and the detailed scenery and costumes hint at the setting of 1945 England, “when men are returning from the war and women have taken positions of power at home,” as  described in River Company’s press release for the play.

Donna Leonora, the governor of Messina and one of the four characters whose gender is swapped from a male to a female to better fit the time period, is played by Christine Anderson, a veteran of local theater since 2004. Anderson never ceases to captivate with her subtle eye movements and facial expressions, utilized even when not speaking.

In fact, the entire cast was fully engrossed in their characters throughout the entire show, always being sure to react to whatever action was happening on stage — no small feat when working with Shakespeare’s antique dialogue.

Impressively, there were no major chunks of lines forgotten by any of the actors either. It was very clear from the overall performance that every person involved in this production put in hours and hours of dedicated time and effort to make it work.

The setting in front of the great stairs in Skidompha turned out to be the perfect stage for “Much Ado About Nothing.” The many inconspicuous entrances and exits provided perfect places for the players to appear and disappear from the audience’s field of vision.

The stairwell, the balconies overlooking either side of the stage, and some carefully placed shrubbery on the ground floor afforded cover for the many scenes in which eavesdropping occurs.

This is a key component of the comedy’s ultimate heft, as essentially there would be no plot or conflict without all the misunderstandings and overheard conversations. And this is the main reason the River Company made it work so well in an open area where no one would expect a Shakespeare show to break out.

“It was a great use of the space,” producer Allison Eddyblouin said after the opening night performance. 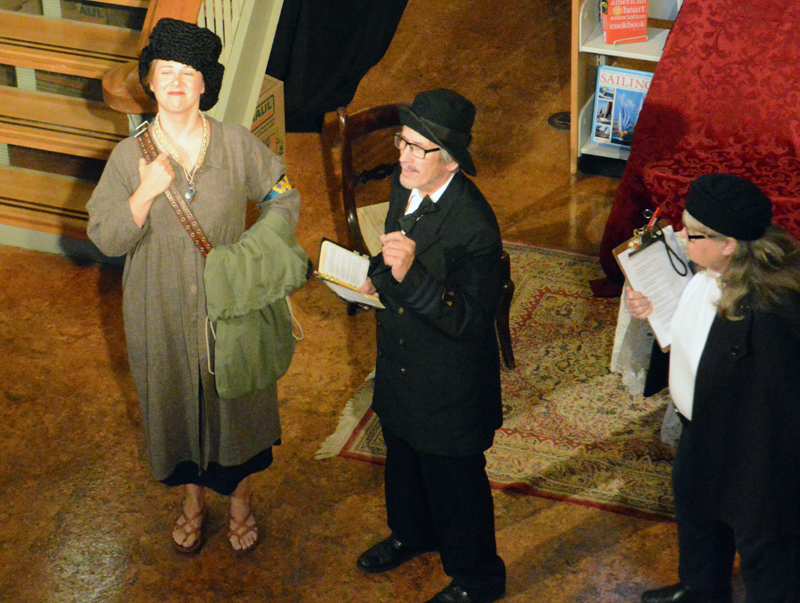 The surprise comedic duo of Mike and Beth Rowe as dimwitted Dogberry and Vergina (right) indoctrinate Georgina Seacoal (left), played by first-time actress Jelena Godrujan, into the constabulary in the River Company production of “Much Ado About Nothing” on July 26. (Evan Houk photo)

The happy misunderstanding that leads to reluctant true love garnered the greatest number of laughs. The sharp-tongued battle between Beatrice, played by a witty and playful Jessica DeLisle, and Benedick, played by Ben Meader with deadpan reserve, eventually led to the two stumbling upon their love like two blind squirrels lucking into an acorn.

The seeds of “noting” were planted by Ursula, portrayed by first-timer Jelena Godrujan (who also plays a comic Georgina Seacoal) with the chops of a veteran and Hero, Beatrice’s cousin, the near-tragic figure in this story, played by Rachel Kaplan with overflowing innocence and grace.

These two characters plotted to ensure Beatrice overheard their conversation discussing Benedick’s supposed undying love for her. And Jessica DeLisle’s Beatrice did hear and fully react from the balcony above, creating a very unique theater dynamic, causing the audience member to keep glancing back and forth to gauge the reactions of the players. The audience could not anticipate from which corner the next player would materialize.

The near-tragic misunderstanding is facilitated by a classic Shakespeare villain, Donna Julia, played convincingly by Andrea Handel with her cutting and constantly narrowing eyes and devilish scowl. Handel’s Donna Julia directs Borachio, played by longtime theater vet Sumner Richards, to create a situation that convinces Claudio, Hero’s suitor, that she is unfaithful. 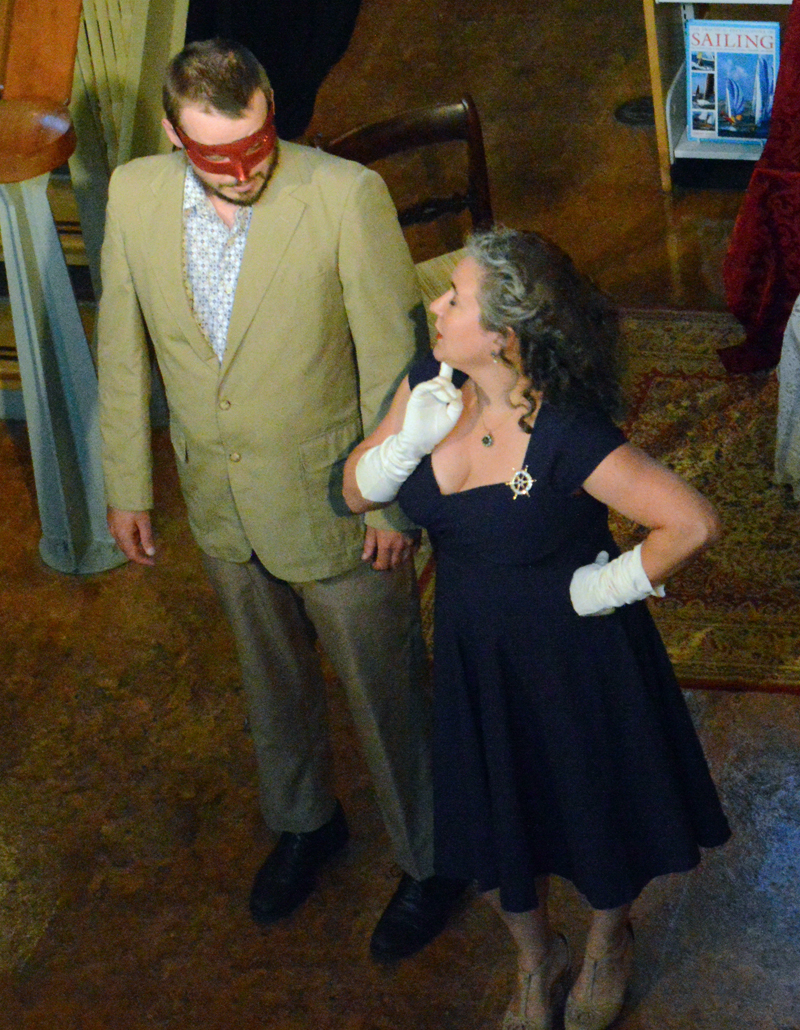 Ben Meader’s deadpan Benedick spars with Jessica DeLisle’s sharp-tongued Beatrice during the masquerade scene in the River Company production of “Much Ado About Nothing” at Skidompha Library on Friday, July 26. (Evan Houk photo)

Claudio, a male character portrayed convincingly by Amy Holt, is tricked by Borachio into thinking Hero has been unfaithful before their imminent marriage. This leads to a series of events whereby the wedding is called off and the Friar, portrayed by the strong stage presence of Michael Powers, who also plays Leonora’s brother, Antonio, suggests faking Hero’s death to reveal the truth.

While Jessica DeLisle and Meader, as Beatrice and Benedick, respectively, received the most laughs, a surprise comedic duo that appears right before intermission had perhaps the biggest laughs.

Mike and Beth Rowe, longtime theater vets and no strangers to Shakespeare, steal the show with their witless watchmen routine as Dogberry, the Master Constable in Messina, and Vergina, Dogberry’s loyal but dimwitted partner. They hobble around comically, fingers forever wagging in the air, in a search for truth that Mike and Beth Rowe depict like cats without whiskers.

The extreme irony is that this duo unknowingly ends up cracking the case by arresting Borachio and his crony Conrade, played by a younger local theater regular in Sam Inman, and coaxing the truth from them.

One of the biggest laughs is when Conrade calls Dogberry an “ass” and Dogberry, in his blind quest for justice, mourns the fact that it could not be recorded that he was called an ass so that Conrade could be properly punished for the insult.

This joke comes up again at the end of the play, eliciting another large laugh from the audience, and all the misunderstandings are made right again, tensions are relaxed, and Michael Powers’ Friar officiates two back-to-back weddings.

The River Company brings it all back home at the end and manages to conjure something — loads of tension and laughs — out of “noting.”

Tickets are $15 for members and $17 for nonmembers. Seniors are $10 and students are $5. Tickets may be purchased through rivercompanytheater.org or at Skidompha Library, or reserved at 522-2797. At the door in the rear of the library, River Company will accept cash, check, and credit cards.