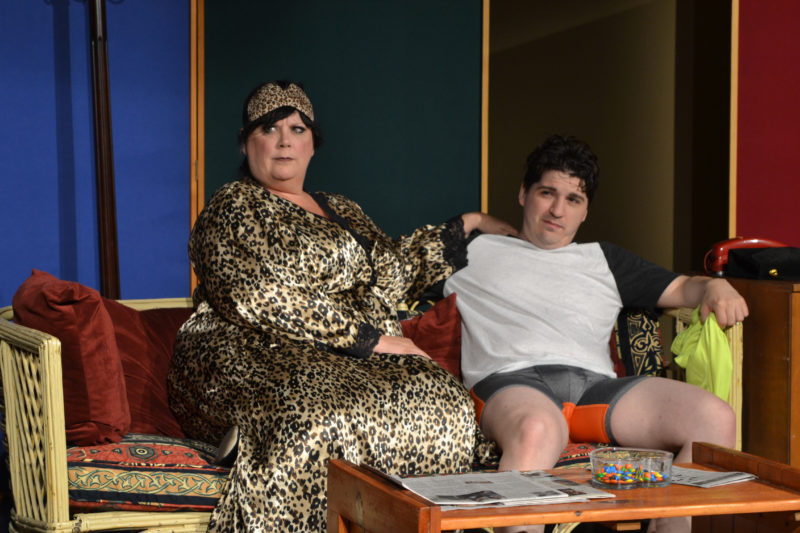 Tamara Lilly plays Masha and Tyson Bailey is Spike in the River Company production of “Vanya and Sonia and Masha and Spike.” (Christine LaPado-Breglia photo)

The cozy Porter Meeting Hall at Skidompha Library in Damariscotta was the setting for River Company’s afternoon presentation on Sunday, Aug. 6 of the comedic Christopher Durang play “Vanya and Sonia and Masha and Spike,” the third in a series of six performances. The play is directed by Allison Eddyblouin and dedicated in the program “to the memory of Charlie Waterman,” the co-founder of River Company who passed away July 30. 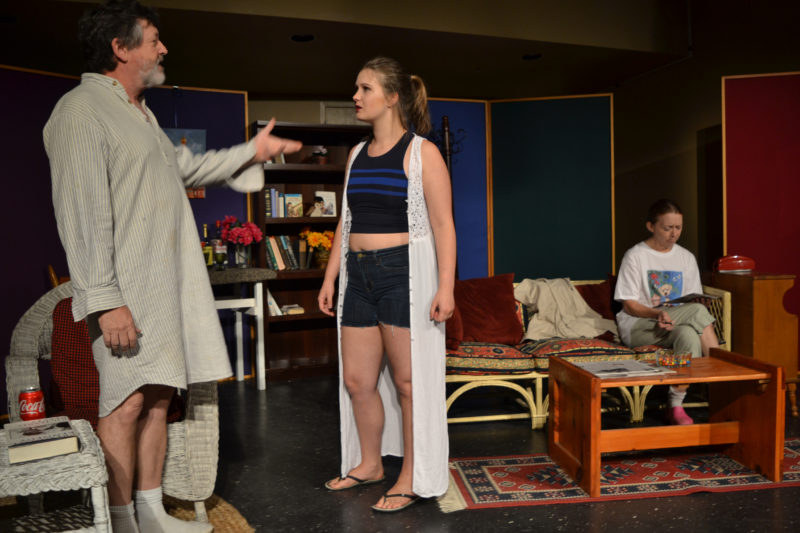 From left: Stephen Wallace as Vanya, Thalia Eddyblouin as Cassandra, and Christine Andersen as Sonia in a scene from the River Company production of “Vanya and Sonia and Masha and Spike.” (Christine LaPado-Breglia photo)

In the opening scene, when Sonia hurls and smashes two coffee cups during a sometimes heated conversation with Vanya, audience members are quickly reminded – thanks to the loud, startling noises – of the intimacy of the setting. The audience is seated in chairs at the same level as the actors, who are on the floor, not on an elevated stage. Sound carries easily in the small room. When Vanya and Sonia swear at each other, the effect is similar.

In Cassandra’s first entry, she bolts onto the stage and yells out, “Beware the Ides of March!” before going on to make a prediction about the cup-smashing that has already happened. Her speech is loud and dramatic, and it plays comically, setting the tone for all other Cassandra appearances – and, refreshingly, there are many.

Similarly, Lilly plays Masha in a rather over-the-top way. Masha enters with Spike. “He’s my beloved,” she announces, introducing Spike, who is 29 years old to her “41, possibly 42.” Both Masha and Spike come across as somewhat caricatured, but this serves to remind the audience of just how often people fall into certain stereotypical roles in life. Spike is clearly the ambitious young actor who sleeps with an aging star to help him get ahead in his career, and Masha, the voluptuous-but-aging actress who has gone through five husbands, is only too happy to oblige due to her need to be affirmed as a still-desirable woman. 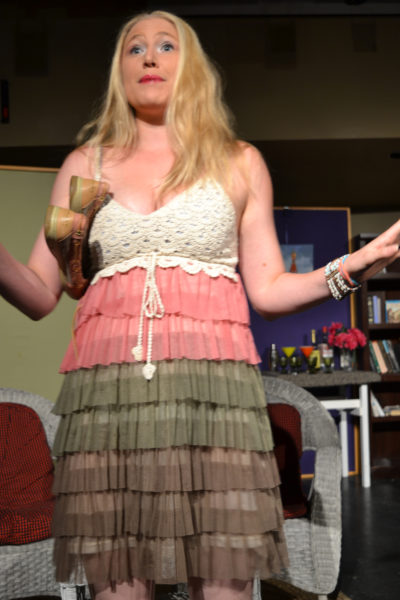 Brittany Wallingford plays Nina in the River Company production of “Vanya and Sonia and Masha and Spike.” (Christine LaPado-Breglia photo)

Spike also serves as a hands-off type of love interest for Vanya, who is gay. Spike’s “reverse strip tease” at one point in the play is a funny segment in which he does a bump-and-grind dance while putting his clothes back on after stripping down to his underpants. Masha is pleased because Spike is no longer on display for Nina – Masha’s rival-of-sorts – to gaze at him. Vanya is pleased because he obviously finds the dance sexy.

Sonia’s character flip from depressed, never-married 52-year-old at the beginning of the play to her costume-party character of an evil queen “as played by Maggie Smith about to win an Oscar,” as she puts it, is interesting. Andersen does an admirable job of inhabiting the two opposite character types. In the play, the switch to dramatic-actress alter ego helps Sonia experience a new side to herself, a development that moves the play toward its hopeful conclusion.

One is reminded throughout the play of how refreshing small-scale community theater is, even the occasional flubbed line. When the cast members take their eager bows at the end, they are so close to the audience that one can almost touch them.

“Vanya and Sonia and Masha and Spike” plays three more times in the Porter Meeting Hall at Skidompha Library, 184 Main St., Damariscotta: Friday and Saturday, Aug. 11 and 12 at 7:30 p.m., and Sunday, Aug. 13 at 3 p.m. Tickets are $15 for River Company members, $17 for nonmembers, and $5 for students. Parental advisory: occasional coarse language. Learn more at rivercompany.org.