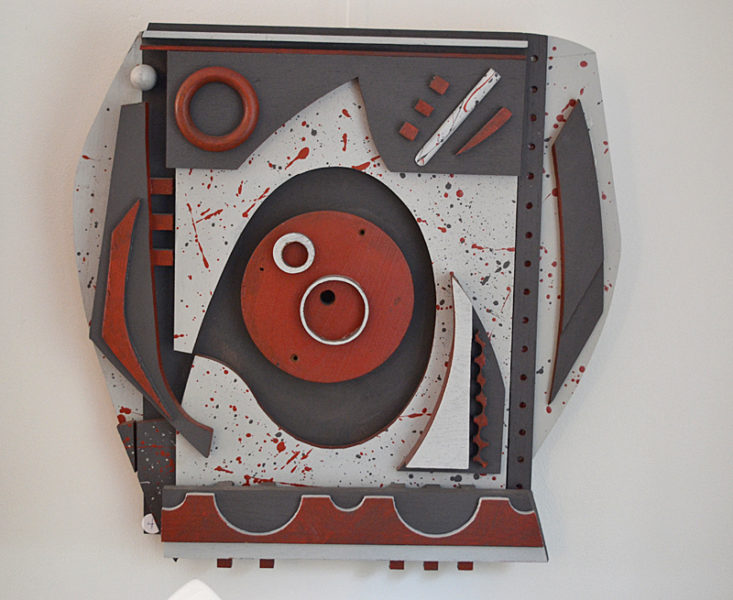 The work of Damariscotta artist Bernice Masse Rosenthal – painted wood assemblage and ink-on-paper collage – currently occupies the walls and sections of the floors of two rooms at the Pemaquid Watershed Association’s office-gallery on Main Street in Damariscotta. Rosenthal – whose work interestingly seems to veer toward 1920s German expressionism and the modernistic tone set by such silent films as Charlie Chaplin’s “Modern Times” – offers both hanging and standing pieces made with found objects. 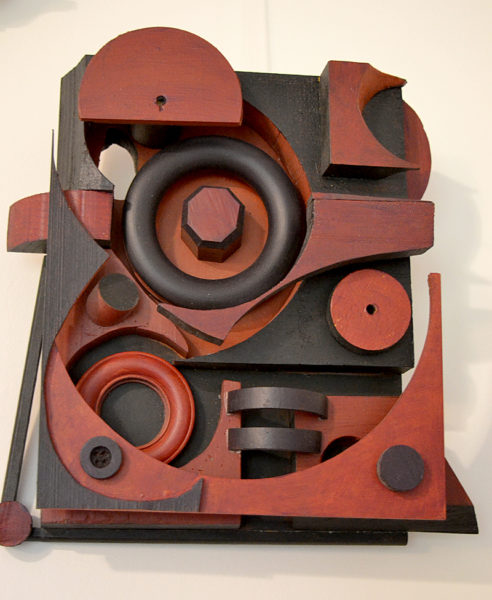 Perhaps most emblematic of her work, for both its title and its appearance, is “Metropolis,” a round hanging piece featuring jutting-up round and square dowels assembled to form what vaguely resembles a modern cityscape. It should not be lost on the viewer that the piece has the exact same name as the famous 1927 German science-fiction film by Fritz Lang. Her ink-on-paper collage “Die Grosse Rosane Machine,” with its German title and modernistic feel, adds to the perception that she is paying homage to German expressionist art.

All of Rosenthal’s wood-assemblage pieces have the feel of being somehow part of the machinery, the workings of modern life – though a modern life portrayed by the artists of the early 20th century. None of them are created using bright colors – only dark colors and blacks and grays and browns, evoking industrial paint.

“Circles within Circles” is a piece in red and black featuring various round and jauntily cut pieces of painted wood assembled into a creation that resembles machinery. The viewer can easily imagine this piece coming to life, beginning to move its parts round and round, and back and forth, with the chug-chug of an automobile engine.

“Fiesta” is a red, black, and gray wall hanging whose center assemblage takes on the abstract appearance of a bird. One can easily imagine the bird moving from side to side, ticking, as if in an odd sort of clock, its other still pieces moving in time as well. 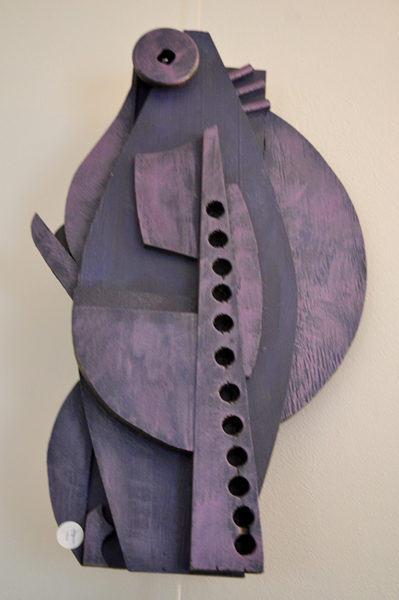 “Pablo’s Guitar,” a wall hanging painted in shades of muted purple, evokes – as the title of the piece suggests – the work of Cubist painter Pablo Picasso. Appearing to be more fish than guitar, the work nicely conveys the strange perspectives and juxtapositions that Picasso’s work is known for.

“Bentwood Chair” is a particularly nice reinvention of the parts of a chair into a wall hanging whose cast shadows add to the piece’s creative, layered effect.

Rosenthal’s “tapas” series of seven small assemblages – including “Large Tapa, Lavender” and “Small Tapa, Sienna” – sits on the ledge above the window in the central room of the PWA space. Like the small food plates the name “tapas” refers to, these cleverly designed, painted wood assemblages are small versions of Rosenthal’s larger work, but created so as to also suggest the idea of food as opposed to strictly reminding one of machinery. Pieces of wood are arranged on tray-like frames to suggest perhaps a Spanish tapas plate or a Japanese bento box. They are delightful to look at.

All in all, the Rosenthal show is a playful and thought-provoking exhibition well worth some perusal, especially for buffs of early 20th-century innovative art forms. It will be on the walls of the PWA office-gallery, at 584 Main St. in Damariscotta, through Thursday, Nov. 10. The office is open weekdays from 9:30 a.m. to 4:30 p.m.