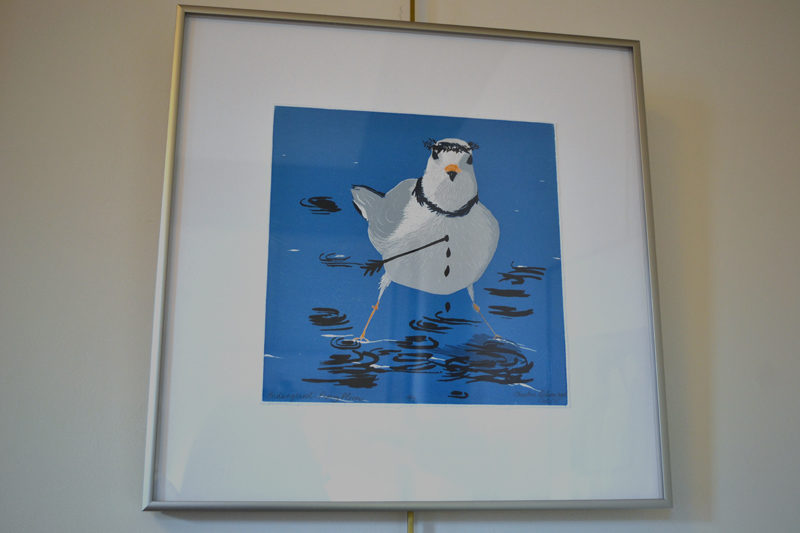 “A Sense of Place/El Sentido del Lugar” is the collaborative cross-cultural art exhibit that has graced the walls of both floors of Legacy Properties Sotheby’s International Realty in Damariscotta since mid-September. The 60 works of art featured in the environmentally focused exhibit were created by 17 printmakers from Gardiner’s Circling the Square Fine Art Press and 15 printmakers from Fundacion Estamperia Quitena in Quito, Ecuador. As a press release for the timely exhibit said, the creators of the pieces “celebrate a visual conversation on sustainability, biodiversity, and the ways local changes may make global impacts.”

Maine artist Karen Adrienne, director of Circling the Square Fine Art Press, weighs in with a beautiful, large lithograph titled “Requiem,” featuring a modern-day take on the iconic Venus of Sandro Botticelli’s famous painting “The Birth of Venus.” In Adrienne’s version, Venus stands in her half-shell, suspended between a sky on fire and a cracked, drought-stricken, treeless landscape. A Requiem Mass in the Catholic Church, one should keep in mind, is a Mass in honor of the dead. We understand from Adrienne’s piece that the Earth is in some ways dying – at the very least, very stressed.

Paula Barragan, from Ecuador, offers a striking abstract serigraph called “Manuela.” Manuela, it seems, is the name of the large red-eyed wasp or bee depicted in the three-color piece. Because she is named, we feel a connection to this yellow-and-black creature that is both seemingly decorated by the ornate jumble of black lines swirling around her and trapped by them at the same time. We sense a vulnerability to whatever forces these are that engulf her, while perceiving her strength to survive as well. One is reminded of the current struggle of bees to make it in an increasingly challenging environment. 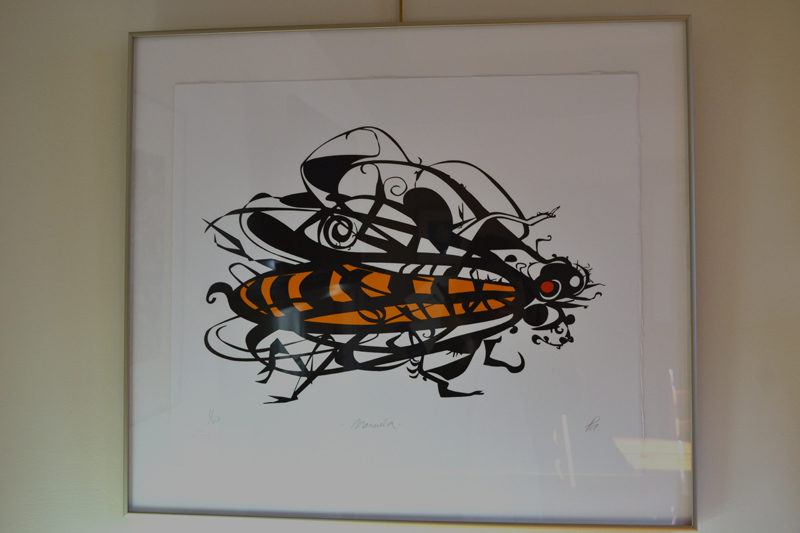 Robin Brooks’ large linocut, “Tree of Life,” stands out for its bold, monochromatic look – it is a black tree on white paper, its leaves of various patterns virtually indistinguishable in design from what appear to be the stones covering the ground. “This cross-cultural project allows me to explore the balance that exists between living species and their surroundings,” Brooks said in a promotional booklet published by the Gardiner-based press. Clearly, the leaves of the tree are portrayed as being equal to the stones in the tree’s surroundings.

Juana Llore’s three-part etching “Sin Titulo” (“Untitled”) is a beautiful homage to the beauty of the rainforest. Fernando Lopez pays homage to a single green leaf in his large print “Corazon arriba.” Upon closer inspection, one notices a number of much smaller leaves blended into the surface of the large, heart-shaped leaf.

Ecuadorian artist Giti Neuman created a powerful serigraph called “Porque,” which one could translate as meaning both “Why?” and “Because.” In it, a somewhat frightened-looking monkey looks into the distance, the hints of a rainforest in chaos looming behind him. In the show’s accompanying booklet, Neuman writes that the impetus for her art was “the importance of the Yasuni (National) Park ecological reserve and its conservation.” Her “initial enthusiasm,” she said, “soon turned to anger on realizing the aggression that the park faced from oil exploration and production.” 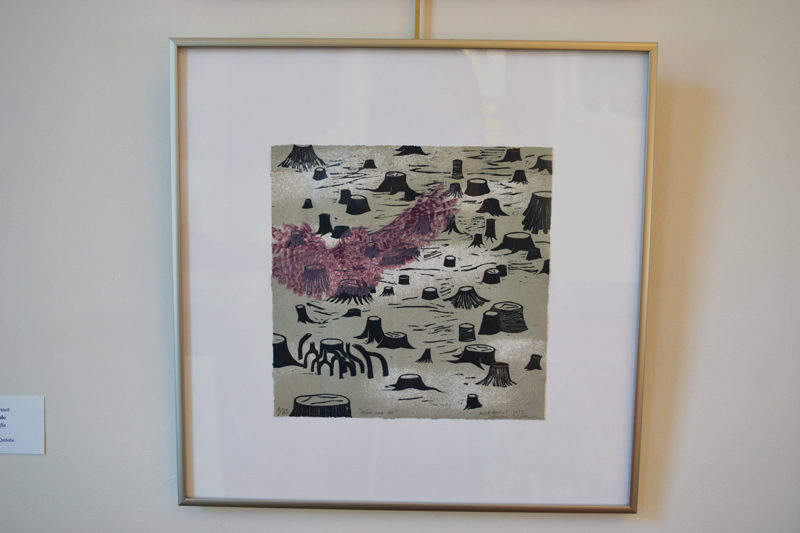 “Once Upon a Time,” a collaborative woodcut print by Ecuador’s Alice Bossut and Maine artist Christine Olson. (Christine LaPado-Breglia photo)

Neuman, interestingly, is a survivor of the Auschwitz concentration camp in World War II Poland, according to Sue Jones, office coordinator at Legacy Properties Sotheby’s International Realty. Neuman also has a 2006 series of Ecuadorian stamps honoring her, said Jones.

Collaborative pieces in the show are equally interesting. An untitled minimalist print on yellow paper by Brunswick’s Diana McFarland was “intervened upon,” as the artists call the process of adding to another’s print, by Ecuador’s Cecilia Izurieta. In the imagination-stirring piece, a strange-looking little man is chasing a hand that is dropping what looks like a rock or a pearl. Below it hangs “Achiote,” created by Izurieta and intervened upon by McFarland with whatever details she decided to add. The same hand dropping a pearl or stone and the same funny-looking man appear in this piece, with the addition of an achiote plant, from which comes the food coloring called annatto.

Nearby hangs McFarland’s lovely, large, untitled intaglio relief featuring scratchy, swirling blue lines that seem to represent both water and the graceful lines of a tall bird such as a crane. Decidedly Asian in its style, the piece also features a delicately lined orange moon in the upper left corner. 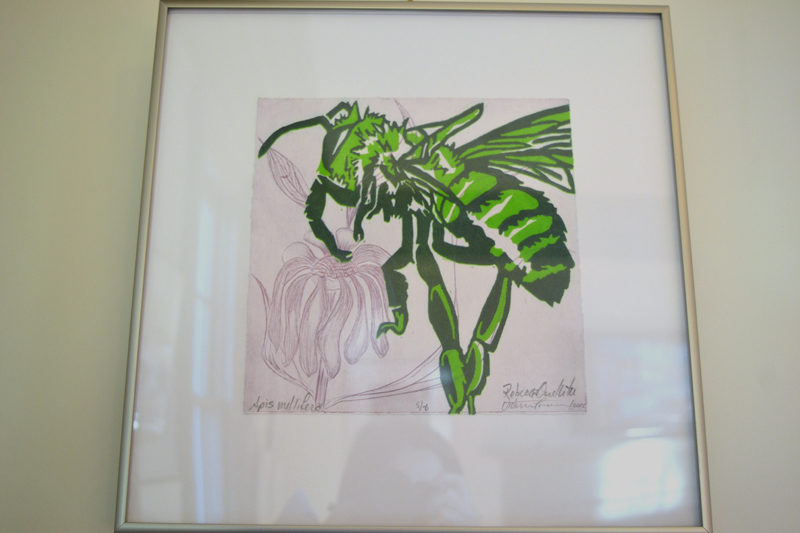 “I see it as a protest against our shrinking environment,” said Jones of the thought-provoking art in the exhibit. Clearly moved, she pointed out “Once Upon a Time” – a collaborative piece whose main subject is an expanse of tree stumps, reminiscent of the well-known Dr. Seuss book “The Lorax” – and Rebeka Ouellette’s drypoint-engraving print “Working Against the Clock.” The latter is an intricate two-color piece focused on bees creating sections of honeycomb. The title says it all: honey bees work very hard and they are working against time that seems to perhaps be running out for them.

The last day to catch this impressive show is Wednesday, Nov. 23. Legacy Properties Sotheby’s International Realty is located at 170 Main St., Damariscotta. It is open from 9 a.m. to 5 p.m., Monday-Friday. Call 563-2775 for more information.

The exhibit travels to Boston University School of Theology in January 2017 for a two-month run.