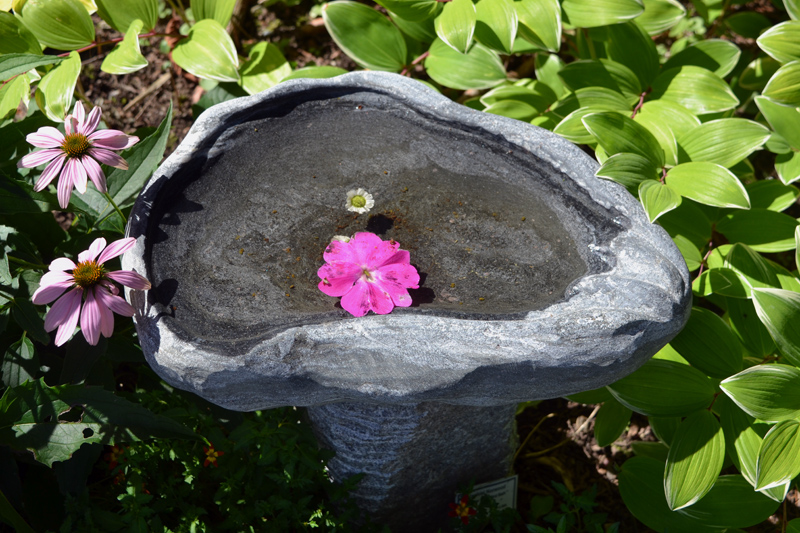 One is not even inside the front door of Damariscotta’s Stable Gallery, which is currently featuring an exhibit titled “Lights and Shadows,” and one already is immersed in the beauty of this eclectic show.

Beginning with stone sculptor Rachiel Norwood’s “Shell,” a bold rendering in Maine stone of a scallop shell, and her lovely piece titled “Oyster Shell Bird Bath,” which someone thoughtfully filled with water and a bright-pink floating blossom, the show’s art already greets the gallery-goer in the front garden area.

Norwood has three stone sculptures in all outside the gallery and a number of them inside, including the graceful marble-on-blue-stone piece called “Dreamer.” Tom Stuart’s concrete pieces – which, like Norwood’s, offer interesting shadow play depending on the changing light throughout the day – join Norwood’s as a sort of welcoming committee.

Once inside, one is free to peruse the various art-filled rooms that comprise Stable Gallery, which, as the gallery’s website, stablegallerymaine.com, points out, is “(h)oused in the actual stable attached to the house built by clipper ship builder Eldridge Norris in the 1850s.”

Fitting the theme of the show, a number of Damariscotta artist Rosalind “Roz” Welsh’s pieces are featured. Welsh’s three-dimensional abstract oil-on-canvas paintings offer a wonderful take on light and shadow as the stitched paintings create their own shadows, assisted often by dark paint to enhance the shadow effect in sections of the pieces.

Paintings by Bruce Habowski, some reminiscent of Edward Hopper’s famous “Nighthawks,” fit in nicely with the theme as well. Even his “daytime” pieces, including “Shadow Play,” of a white wooden house with the late-afternoon shadow of another house upon it, do the show’s title justice.

A who’s who of area artists is featured in the current show, including painters Elaine Abel, Robert Gibson, Jon Luoma, and Polly Smith, whose work is highlighted in the main central room of the gallery. Luoma’s watercolor-and-ink pieces, such as “Winter Marsh Uplands” and “Village, Nepal Himalaya,” are exquisitely detailed and a joy to spend time studying.

Other familiar names pop up in the exhibit: oil painter Hati Modr (her painting of skiffs on a beach, “Shadow Play V,” is particularly compelling), assemblage artist Mae Billington, oil painters Priscilla McCandless and Denise Rankin (Rankin’s colorful, whimsical dance-focused pieces are a delight to view), and Bernadette de Cesare, whose captivating pastel technique results in pieces that almost look like they have been felted.

The always-satisfying acrylic work of Daisy Greene appears. “First Frost,” a refreshing take on a winter landscape scene, and the pleasingly askew “Blueberry to Red Leaf” are must-seek-out pieces.

And one must not neglect to peruse the ceramic work of Jackie Melissas, creative in appearance while being functional at the same time. Her white-and-blue “Flair Vessel” is notable in this regard.

Wood artist Louis Charlett and metalworker Nicholas Downing offer some finely made work as well. Charlett’s box made from a burl and resembling a very small, unusual piano (at least in this reviewer’s mind) is stunning.

One of the benefits of Stable Gallery is that it is a co-op and, as such, its artist-members man the gallery during its open hours. On the day that this reviewer visited, Daniels, the textile artist, was on duty and more than happy to discuss her work (including giving detailed information on how she created her “Large Red & Black Vessel”) and the work of others. One should keep this in mind when visiting and take full advantage of the opportunity to learn as much as one can about the art and the artists featured.