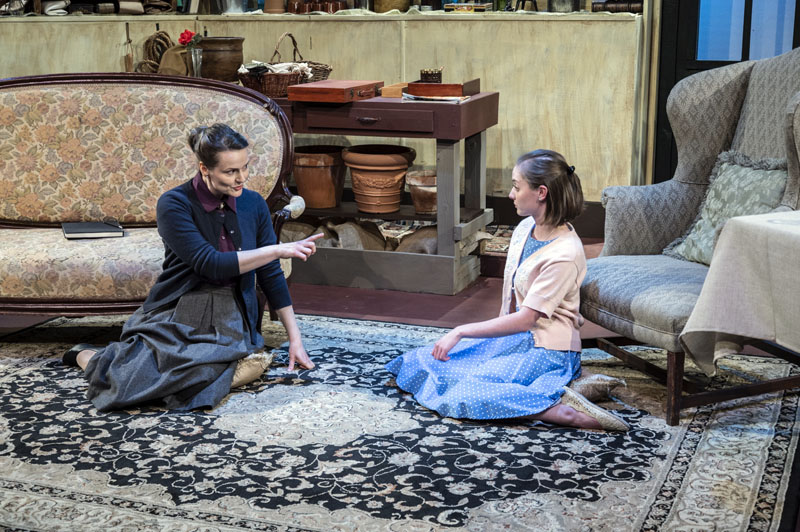 Nanette Fraser, as Miss Madrigal, and Rebecca Tomasello, as Laurel, trade questions in a truth-telling game during a rehearsal for the Heartwood Regional Theater Co. production of The Chalk Garden at the Parker B. Poe Theater in Newcastle on May 16. (Bisi Cameron Yee photo)

Heartwood’s latest offering, “The Chalk Garden” by Enid Bagnold, feels like a work of the past, yet its message feels prescient in a way that is worthy of consideration.

The play was first performed in 1955, a time when old traditions were about to be disrupted by the radical vigor of the 1960s. Griff Braley, Heartwood’s artistic director, makes a case for some parallels between that time and today.

“We’re far enough past the 60s to start talking about … some of the things that we’ve lost,” he said. While “The Chalk Garden” may have ultimately been forward looking when it was written, heralding a freer, less buttoned-down era on the horizon, there were some important societal constructs that were lost: tradition, stability, order.

“I see that everywhere around me that people are trying to figure out ‘What now?’” Braley said. “We’re in a time where the structure feels unknowable.”

That is the dilemma for Mrs. St. Maugham, a British society matron trying to raise a difficult granddaughter and trying to grow flowers in a garden with poor soil.

After hiring a governess with a resume better suited to gardening than childcare, St. Maugham finds herself caught between a past of strict societal norms, creme de menthe cocktails, and all-knowing butlers, and a present where she is adrift, estranged from her daughter, unable to make her garden thrive, and in danger of finding herself entirely alone.

As Braley describes her, Mrs. St. Maugham is “standing on the edge of the modern world, staring into it.”

“The Chalk Garden” is not easily pigeon-holed. At the time of its initial production it probably fell into the category of drawing room comedies or comedies of manners with its intimate cast and single set. Bagnold clearly loved language and clearly had wit. Her dialogue sparkles, even after 70 years.

Encyclopaedia Britannica defines a comedy of manners as a “witty, cerebral form of dramatic comedy that depicts and often satirizes the manners and affectations of a contemporary society.” On the surface that tracks, but the underpinning of the play is the stuff of family dissolution, and within the play are dark secrets, great pain and deep loss. Its characters have suffered.

“I didn’t see the comedy in this as much as I saw the wit,” Braley said. As the play’s director, he approached it as more of a dramatic piece.

Carole Florman as Mrs. St. Maugham portrays a character who is used to being in charge, but who ultimately has little control, ceding her authority to the omniscient off-screen butler Mr. Pinkbell, her newly hired governess Miss Madrigal, or even to Laurel, her granddaughter, clearly spoiled, who places herself on an even footing with her “Grandaloo.”

Rebecca Tomasello is well-positioned to play 16-year-old Laurel. She is 16 herself, yet has a solid body of theater work behind her. From the elegant positioning of her fingers as she puts on airs for the governess candidates to the way she curls her legs under herself, and how one foot shyly falls behind the other when she sits, Tomasello inhabits the role head to toe. Her character’s youth is evident in how she holds herself, in the brief glints of doubt that wisp across her face.

Nanette Fraser plays Miss Madrigal as deeply observant. She sees past the facades to sense Laurel’s pain and St. Maugham’s self-doubt and loneliness.

There are elements of Mary Poppins in the character. Mysterious, stern, but loving, she quickly earns the title of “Boss” from her young charge. She is the one to puts everything right. And, tellingly, she knows how to garden in chalky soil.

Jason Iannone as the manservant Maitland does his best to keep the dysfunctional household running, as a gardener’s assistant to St. Maugham, albeit a less than competent one, and as a companion to Laurel, the closest thing she has to a friend.

Tim Cunningham as the judge is, in Braley’s words, “an affable gentleman,” secure in his role in society until he begins to question the system he is a respected part of.

Teralyn Reiter plays two sides of the mother-daughter equation, deeply wounded by and estranged from her own mother and deeply committed to reestablishing her relationship with a less than enthusiastic Laurel.

Heidi Kopishke approaches her role as an applicant for the governess position with a bubbly, naive sincerity, quickly punctured by verbal barbs from her would-be student.

Rachael Schuster as the nurse who stands in for invalid butler Pinkbell is an imperious, demanding presence during her brief walk-on appearances, yet another character subverting St. Maugham’s authority.

Braley said there’s a shifting of the plates for all the characters. Life and death, loss and redemption. All play a role. A mother reclaims her rights as a grandmother loses hers. A judge reexamines his concept of justice while those convicted of crimes seek reinvention.

Everything happens in a compressed moment – all those shifts happen in a single day. But at the end there is an offer of redemption. And that gesture of hope lifts the play from the realm of tragedy.

The audience arrives in the middle of these messy lives and leaves with many questions unanswered. What happened to Laurel – what deep truth is hidden by her lies? How did Madrigal come by her exhaustive knowledge of gardens? And what are the particulars of her tragic past? What made the relationship between a mother and daughter so damaged that it infected the next generation?

“I think great authors do this to us a lot,” Braley said. “They lock us into a place where we can’t really nail it down.” The intention there as a writer is “to leave (the audience) the space to sort of retrofit (their) own thoughts” onto the characters.

Braley points out that Bagnold was more novelist than playwright and her writing style reflects that. She has done a deep dive into her character’s motivations and backgrounds. “The way she sort of constructs that into the play form I think is what makes (‘The Chalk Garden’) feel really unique,” Braley said.

Braley has been thinking about the relevance of plays like “The Chalk Garden” to the local community and to the broader world as he makes plans for Heartwood’s upcoming 20th season. “A core section of our audience really craves this kind of theater,” he said.

He wonders about the play’s initial reception: “What was that audience in 1955 like that laughed at this play and thought it very humorous?”

And he wonders how a contemporary audience will respond to it. Will they dismiss it? Identify with it? The human connections, the family relationships, the sense of being wronged, the hierarchies of society – are they still relatable?

According to a brief biography on the website of the Literary Ladies Guide, a comprehensive online resource for classic women’s literature, “Bagnold’s contemporaries couldn’t quite decide if she was old-fashioned or on the cutting edge.” Perhaps she was both. Perhaps she still is.

“The Chalk Garden,” can be seen at The Parker B. Poe Theater in Newcastle through Saturday, May 28. Tickets are $5 for students through college and $20 for all adults. Reservations are recommended by emailing info@heartwoodtheater.org or calling Heartwood at 563-1373.