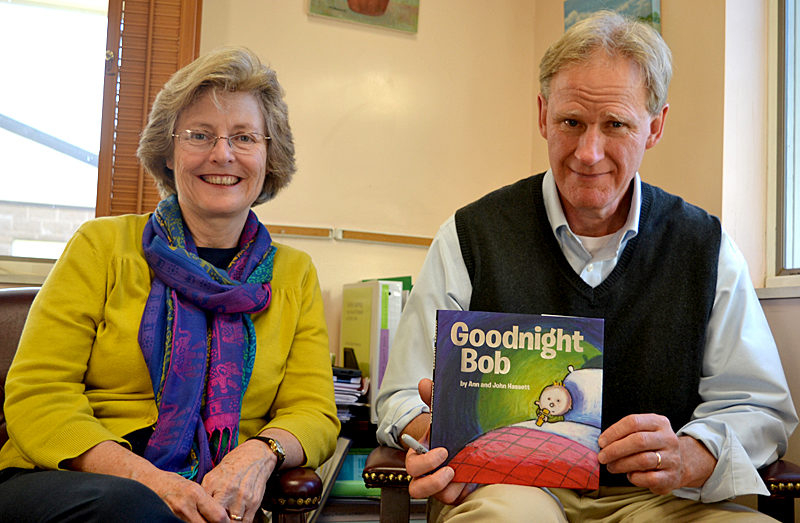 “Goodnight Bob,” the newest book from Waldoboro husband-and-wife team Ann and John Hassett, is one of those one-of-a-kind children’s books about bedtime – like Anna Dewdney’s “Llama Llama Red Pajama” and Peggy Rathman’s “Good Night, Gorilla” – that has the word “classic” written all over it. Released in September by Illinois-based children’s book publisher Albert Whitman & Co., “Goodnight Bob” tells the story – in simple language and endearing, colorful pictures – of a little boy named Bob who repeatedly shines his flashlight on all the eyes he sees in the night as he tries to fall asleep. It is both a universally familiar story and one with a wonderful twist near the end of the book (no spoiler here).

“This is our 14th book,” said Ann Hassett in a recent afternoon interview in her office at Nobleboro Central School, where she has been the principal for seven years. “It is our first one with Albert Whitman.” John Hassett, who is a full-time artist, sat alongside her.

The Hassetts described how they create their books, all of which are on the shelves of the NCS library. They work on the text of their books together, Ann said, but it is John who does all the artwork. Their books include 2006’s “Can’t Catch Me,” about a cute little ice cube’s journey out to sea, and the Maine classic “Moose on the Loose,” the Hassetts’ first published book. “Moose on the Loose,” perennially popular with tourists to the Pine Tree State, is widely available throughout Maine, including at L. L. Bean.

“I think we got very lucky with a submission to a publisher,” said John of he and his wife’s start in the world of children’s books. “We were fortunate enough to get an editor to bite on it.” He was referring to Rockport-based Down East Books picking up “Moose on the Loose” and publishing it in 1987.

“I don’t think we knew how lucky we were,” said Ann.

Following the success of “Moose on the Loose,” the Hassetts created 10 books for major publishing house Houghton Mifflin Co., including 1993’s “We Got My Brother at the Zoo” (translated into French as “Danger! Bebe Feroce”) and “The Three Silly Girls Grubb,” published in 2002.

Their long relationship with Houghton Mifflin, they said, was again a case of being “just lucky,” as John put it. They had sent out “We Got My Brother at the Zoo” “to a bunch of different publishers,” Ann said, and Houghton Mifflin expressed interest.

To add to their good fortune, their editor for nine of their books with Houghton Mifflin was Walter Lorraine – a “terrific old-school editor,” said John – until his retirement in 2007.

“We were lucky again to get with Albert Whitman,” said Ann.

Bob is a relatively new character for John. “I do a lot of little drawings. One of them looked like Bob,” he said.

“I draw better than I paint,” said John, who painted the beautiful illustrations for previous books by the Hassetts. “So this was really fun – to do drawings (for ‘Goodnight Bob’) with pencils and color sticks and china-marker sticks. I’d never done it before.”

“There weren’t a lot of details because it was nighttime,” said John of the irresistible, spare drawings in “Goodnight Bob.” “The rug is just an outline,” he said, pointing out a rug on Bob’s bedroom floor. “I didn’t crowd places where words were going to go.” The only time the rug is not drawn as simply an outline is when Bob’s yellow flashlight with the letter “B” on it shines on the corner of the rug, revealing it to be orange and yellow. In this way, John’s drawings accurately show how colors “lose” their color when light is not shining on them.

And, comfortingly, all the characters have a friendly face, like Bob: the moon, the fish in a bowl, the cat, the dog, the mouse, the stars – even the surprise character. “One thing about Bob is that he’s a very gentle, quiet soul,” said Ann.

“I think we do it for ourselves,” said Ann, of her and John’s motivation to create picture books for young children. “And we always hope the children will connect with it.” Though they have no grandchildren, John and Ann have two adult daughters as well as “younger nieces and nephews.”

Of “Goodnight Bob,” Ann said, “We hope it has just the right balance between spooky and safe, a balance between wondering who’s out there, but comfortable at the same time.”

John is currently at work on the pictures for “Bob’s Rock,” the couple’s next Bob book for Albert Whitman & Co., due out roughly in the spring of 2017.

“Bob’s Rock” is set outside in the daytime, the opposite of the setting of “Goodnight Bob.” John said he will use the same drawing materials but has had to change his approach.

The book is currently “in the sketch stage,” said John. “It’s a ‘dummy book,’ a ‘sloppy copy.’” His final drawings must be completed by the end of December.

As of Monday, Oct. 17, the charming book trailer for “Goodnight Bob” had almost 11,000 views; watch it on YouTube at bit.ly/2dmZUR8. Go to hassettbooks.com for more information on Ann and John Hassett’s books.