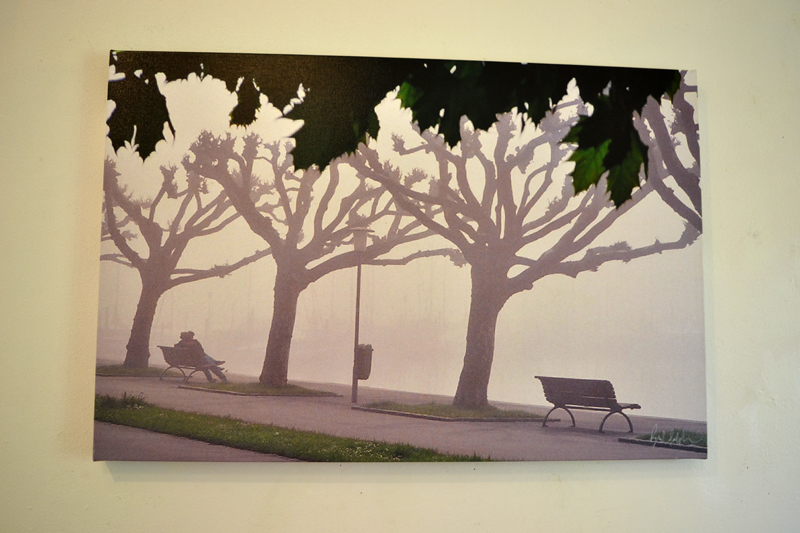 The new exhibit on the walls of both floors of Maine Art Gallery in Wiscasset, titled “Points of View,” features the eye-catching photography of Bob Bond and Brad Sevaldson.

In this show, Bond, known mainly for his commercial portrait photography, offers refreshing slice-of-life photos, mostly in black-and-white, and mostly of urban street scenes featuring people doing interesting things, such as sitting exhausted while dressed in a silver Statue of Liberty outfit, or two old men squeezing onto a motorized scooter to ride along the sidewalk to go play bingo in Atlantic City.

Sevaldson’s background includes work in commercial art. He, too, stretches out in this exhibit with his photographs, many printed on large canvases, focusing on architecture, landscapes, and objects, as opposed to people.

Some of Sevaldson’s photographs, as the show’s program points out, “are enhanced or manipulated to create unique pieces.” One piece that appears to have this treatment is “Lake Constance Morning,” a 20-by-30-inch photo on canvas of a seemingly foggy park scene in Konstanz, Germany. The trees in both the foreground and the mid-ground of the photograph seem to have been altered somewhat to make them appear in silhouette, the foreground ones in near-black, the others dark gray, enhancing the contemplative mood of the photo.

So many of Bond’s black-and-white photos are a sheer delight to study for the details one picks up. In “Off to Bingo,” the aforementioned photo of the two men on a scooter, one notices that the scooter, which was apparently rented from Caesar’s by someone named Georgio Paladino (presumably one of the men riding in it), according to the tag on the back, is headed toward the Trump Taj Mahal. “Presidential Limousine” features a lengthy white Hummer-style limo out of which peers an attractive young woman. In the background is a billboard with the words “Vegas Only Striptease Spectacular Peep Show” on it.

Bond’s “American Youth” is in color, but like his black-and-white photographs, it captures a particularly striking look at contemporary people in the midst of doing their particular thing. In this case, it is a group of young men in baggy shorts, two of them dressed in stars-and-stripes T-shirts, strolling down the sidewalk, one of them wearing a ball cap turned backward and listening intently to music on a small electronic device. The latter young man wears a sleeveless gray T-shirt featuring the Nike logo and the slogan “Just do it.” A young woman, largely obscured, walks behind him. It is the modern-day equivalent of a Norman Rockwell painting in its perfect capturing of everyday life in America.

Like his “Lake Constance Morning,” Sevaldson’s “Mackerel Cove Swing,” a large photo taken on Bailey Island and mounted on canvas, offers the viewer a serene scene, this one of an uninhabited tire swing suspended from the branch of a picturesque tree standing on the shore of a body of water.

Sevaldson features numerous color photographs in the “Points of View” show. Many give one the sense of traveling with him to various places around the world – Italy, Germany, France, Minnesota, Maine – and seeing the allure of each locale through Sevaldson’s eyes. Whereas Bond’s work tends to an invigorating grittiness, Sevaldson’s tends to settle on a more calm, classic sense of beauty. Sevaldson’s series of photos taken of buildings in Italy, such as “Duomo di Orvieto,” “Burano Balcony,” and “Gondola Under a Ponte,” draw the viewer in with their timeless charm and visual attractiveness.

Sevaldson’s and Bond’s photographs co-exist nicely in this photo-filled show, each man’s work providing a type of counterpoint to the other’s. Taking in the entire exhibit, one comes away feeling that one has been across the U.S. and around the world and experienced both urban and rural life from a number of vantage points, from the action occurring on city streets to the peacefulness of a small village in France.