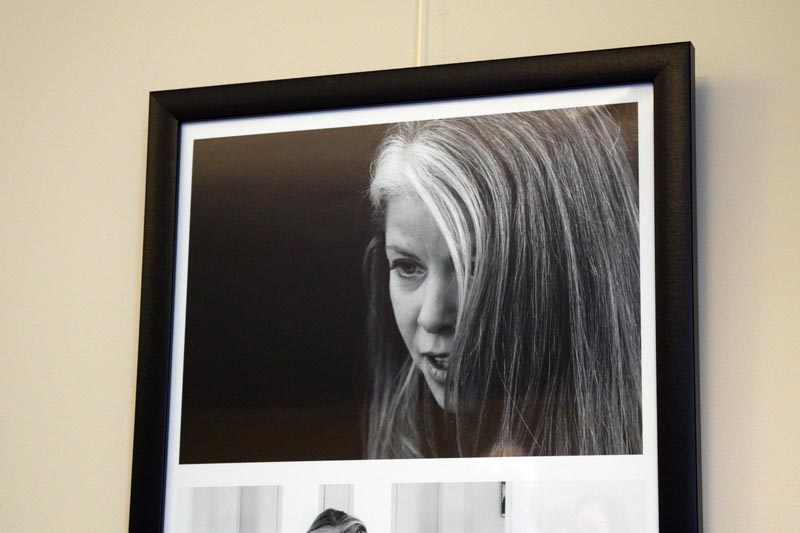 A photo by Bob Crink of a woman named Crystal, whose face appears to be perhaps a mixture of terrified and tired, possibly numb to something. The picture is part of a black-and-white photo exhibit titled “The Women of the Boothbay Region.” (Jessica Clifford photo)

“The Women of the Boothbay Region,” the newest exhibit at the Boothbay Harbor Memorial Library, by Edgecomb photographer Bob Crink, features 20 double-pane framed photos fit for a magazine profile.

The all black-and-white collection of portraits and full-body photos showcases 14 women new to Crink’s camera lens and two women he took photos of for a prior show, but had not used. The photos were converted to black-and-white.

Crink first owned a professional-grade camera in 1963. Since his wife’s passing in 2015, he became a volunteer photographer for various organizations and events on the peninsula, such as the Boothbay Sea and Science Center, the Boothbay Railway Village, and Boothbay Harbor Fest.

“Why women?” Crink said when asked about his subject matter. “Originally, because every organization I shot for here was run by women.”

In early 2019, Crink showed a similar exhibit with the same name, except with color photos of women.

Crink’s inspiration for his new show was from Peter Lindbergh’s book “Shadows on the Wall,” which contains black-and-white photographs of world-renowned actresses. His own copy of the book was on display at the current show’s opening reception on Saturday, Jan. 11. A framed quote by Lindbergh himself was out for people to view, reading: “It should be a duty for every photographer working today to use his creativity and influence to free women and finally everyone from the terror of youth and perfection.” 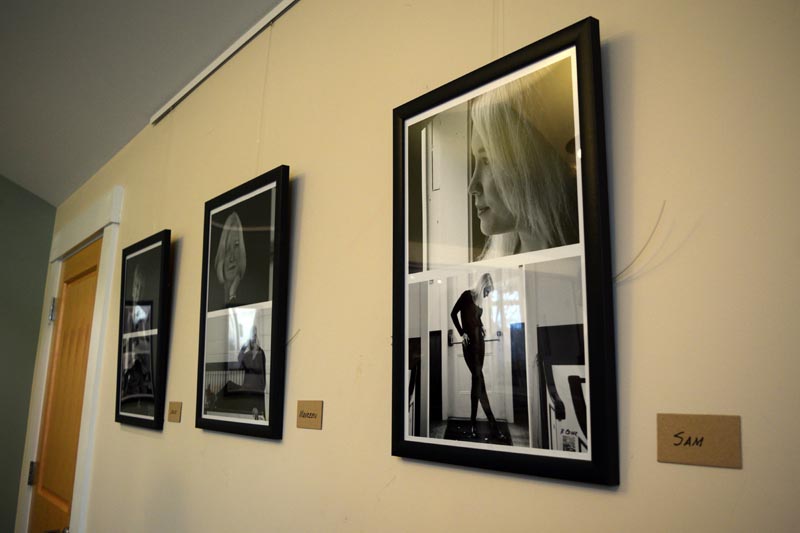 At right: Photos of Sam by Bob Crink. The top photo is a profile, while in the bottom photo, Sam is standing and looking down at the ground. (Jessica Clifford photo)

Photos in the show consist of women ranging in age from their 30s to their 70s. “It runs the gamut of a lot of ages, and I did that intentionally,” Crink said of the show.

Crink knew the women he photographed from various parts of his life, such as Maureen Stormont, from the Boothbay Railway Village; Dana Paolillo, from Boothbay Harbor Fest’s fashion show; and Jen Field, from The Community Center in Boothbay Harbor.

“I think there is a lot of talent out there in women, and I’ve seen some of it … I am supportive of using their talent,” Crink said of women working in various fields.

“I’m just all for the equality of women,” he said.

Except for one photo, none of them were shown to the models until the day of the opening reception.

However, none of the women had anything to worry about with the photos taken of them. The pictures were of professional quality, especially considering Crink only starting to take portraits as recently as March 2018.

A favorite of this reviewer is a portrait of Crystal, whose terrified and tired face takes up half the photo, while the other half is a solid black background. Her hair covers half her face and her lips are parted.

Something beyond the picture seems to have arrested her senses by the way there is a stillness of her head, the terror in her one visible eye, and a slight tightness of her shown brow. The black background envelops her, and makes her appear numb to whatever is happening, as if it is not the first time she has seen it.

One wants to know Crystal’s story.

Other photos did not show as much intensity, with most of the women’s faces resting and serious, except for Crink’s outtakes, which showed women smiling.

More variety in facial expressions would tell more about the women in the photos, such as how a woman’s face contorts when she laughs or a pensive look when she is solving a challenging problem at work.

The professionalism of the photos makes them magazine material, as if they were an assignment given to Crink. 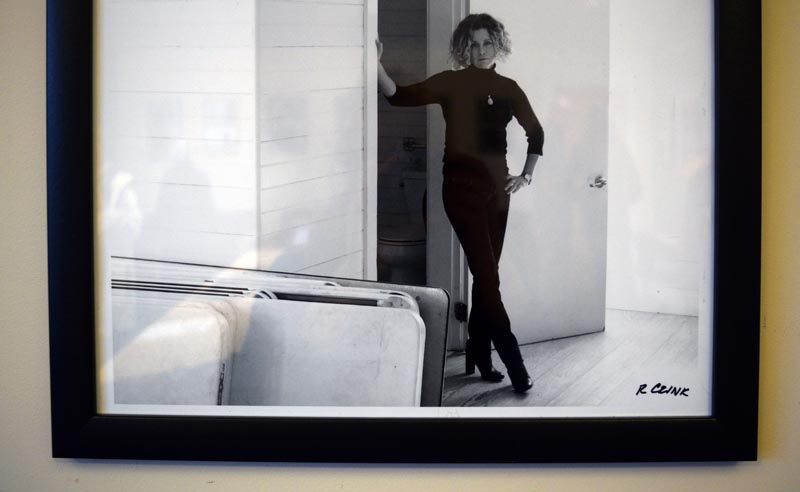 A photo of Deanna, who is resting one hand on a door frame and the other on her hip, taken by Bob Crink and part of the “The Women of the Boothbay Region” exhibit at the Boothbay Harbor Memorial Library. (Jessica Clifford photo)

The straight lines of a doorway and the angles of stairwells help to frame the pictures of the women, which can be seen in the full-body photo of Sam standing and looking down at the floor.

As far as the reviewer can tell, some of the photos appear posed. What kinds of emotions might come to a viewer’s mind if the women were in one of their natural positions or natural environments?

Crink’s photos were taken in the town hall and chapel of the Boothbay Railway Village and the exercise room of The Community Center.

Full-body images were the only images in which one could tell the location of where the women were.

In most of these pictures the scenery did not hide the real subjects – the women – just as one would hope, given the title of the exhibit. However, there was one photo in particular, of Deanna, where the background becomes the subject.

Were the tables already there and the door already open? Did she just exit the bathroom after using it?

Although the model is still there, she feels like an afterthought because there are other questions that comes to one’s mind first.

As for why the photos are in black-and-white? Crink said black-and-white photos place a focus on the model, preventing the admirer from being kidnapped by distraction. “It gets more to the essence,” he said.

A poem titled “Mask,” written by Crink’s daughter, Carrie Crink Brady, when she was 6 years old, was also on display for people to read. It goes along with the show’s theme. The poem is about the “masks” people put on to blend in with others, and sometimes this is dangerous and sometimes it is helpful. Some days it is important to remove the mask and be oneself.

Crink’s thoughts were spot-on regarding photographing his subjects. What would be referred to as flaws, such as the wrinkles decorating a woman’s face or a halo of hairs crowning a woman’s head, were brought out in the portraits. These features of the women were enhanced by wearing little to no makeup, wearing solid-color clothing, and most of them never having modeling experience before.

It reminds one of the humanness of being a woman that is not always shown in the media. It shows what each of us knows to be the truth: none of us are perfect.

“The Women of the Boothbay Region” will run through the end of February and can be viewed during most of the library’s hours. The Boothbay Harbor Memorial Library is located at 4 Oak St. in Boothbay Harbor and is online at bbhlibrary.org. Call 633-3112 for more information.