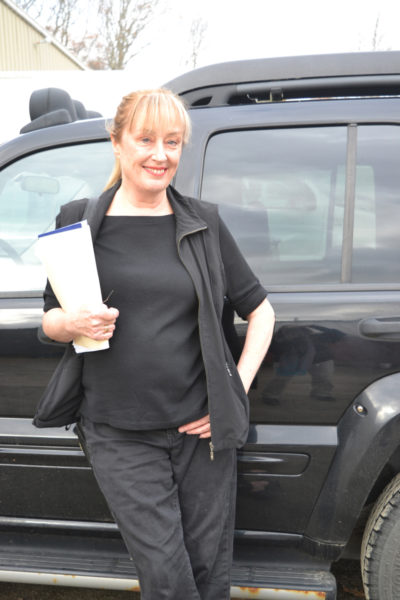 Margo O’Leary is the director of “A Dickens of a Christmas Carol,” the River Company’s upcoming staged reading with music that will take place on Sunday, Dec. 4, at both 3 and 5 p.m., in the Porter Meeting Hall of Skidompha Public Library in Damariscotta. (Christine LaPado-Breglia photo)

On Sunday, Dec. 4, the River Company will present two afternoon shows of Charles Dickens’ “A Christmas Carol.” The theater company’s version of the quintessential holiday show, however, will be a musical, using a script by Damariscotta writer Eleanor Cade Busby, according to director Margo O’Leary. All proceeds from the show will benefit the local Meals on Wheels program.

O’Leary is a River Company member from Newcastle, where she has lived for 11 years. For 20 years, O’Leary and her husband, Keith O’Leary, have run Keith & Margo’s Murder Mystery USA, a popular Newcastle- and Burbank, Calif.-based murder-mystery dinner-theater outfit. She has directed the theater company’s annual Christmastime presentation of “A Christmas Carol” for the past three years. Until this year, it has been presented as a staged reading of the stage adaptation of “A Christmas Carol.”

This year’s version, cleverly titled “A Dickens of a Christmas Carol,” features a number of humorous songs, sung to the music of familiar show tunes. For instance, near the end of Busby’s version, a transformed Scrooge sings, to the tune of “Wouldn’t It Be Loverly” from the musical “My Fair Lady,” these lyrics: “All I want is the chance to prove I’m in the philanthropic groove, and so I’ll make my move – now I’m no longer miserly.” Other musical highlights are “I Feel Stingy” (based on “I Feel Pretty” from “West Side Story”) and “Master of the Feast” (based on the “Les Miserables” song “Master of the House”).

While O’Leary readily admits to not being a great fan of musicals, she said that Busby’s lively script captivated her. “When I started reading it, it was great!” O’Leary said. “Up pop all these songs, which is great. It’s fun!” The cast, seated in a semicircle, likewise will “pop up to sing and do a little ad-lib dancing while they’re singing,” she said.

“Geary is phenomenal as Scrooge,” said O’Leary of cast member Geary Smith, the Rockland actor who played Scrooge in last year’s production as well. “He’s so strong. He’s compassionate, he’s funny, he’s compelling – one of those people you can’t look away from when he’s on stage. And he can sing like a bandit!”

“It breaks my heart when I see people get taken off the (meal) list because there’s no funding,” she said. “The federal government has cut funding for programs like Meals on Wheels in the last few years. … I remember seeing a waiting list of people wishing they had food and they don’t have food – and that can’t happen here.” O’Leary hopes to raise enough money for Meals on Wheels to enable the program to “get more resources and drivers to drive.”

Two shows of “A Dickens of a Christmas Carol” will be presented, at 3 and 5 p.m. on Dec. 4 in the Porter Meeting Hall at Skidompha Public Library, 184 Main St., Damariscotta. Tickets, which are available at the door or by reservation, are $17. Tickets are $15 for River Company members and $5 for students. Seating is limited; reservations are strongly suggested. Call 563-8116 to reserve tickets.