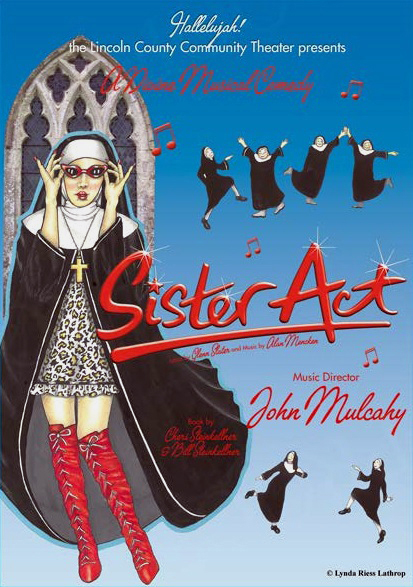 The curtain is going up at Damariscotta’s Lincoln Theater and rehearsals are underway for “Sister Act,” coming to the stage in April.

Based on the 1992 hit film of the same name and starring Whoopi Goldberg, “Sister Act” is a divine, feel-good musical comedy. Featuring original music by Tony Award and eight-time Oscar winner Alan Menken (“Newsies,” “Beauty and the Beast,” “Little Shop of Horrors”), this uplifting musical was nominated for five Tony Awards, including Best Musical.

When disco diva wannabe Deloris Van Cartier witnesses a murder, she is put in protective custody in the one place the cops are sure she won’t be found: a convent! Disguised as a nun, she finds herself at odds with both the rigid lifestyle and the uptight Mother Superior. Using her singing talent to inspire the choir, Deloris breathes new life into the church and community, discovering the power of sisterhood in the process.

Under the baton of maestro John Mulcahy, Lincoln County Community Theater’s production of “Sister Act” features a company of 41, a full orchestra, and a youth ensemble made up of Emerson Harris, Sarah Harris, Spencer Pottle, Kayleigh Tolley, and Katherine Tolley.

A truly moving story, “Sister Act” leaves audiences applauding for more. The cast, chock-full of amazing roles for women and men of all ages, makes this a perfect choice for the nontraditional ensemble and staging at Damariscotta’s Lincoln Theater. A sparkling tribute to the universal power of friendship, “Sister Act” is reason to rejoice.