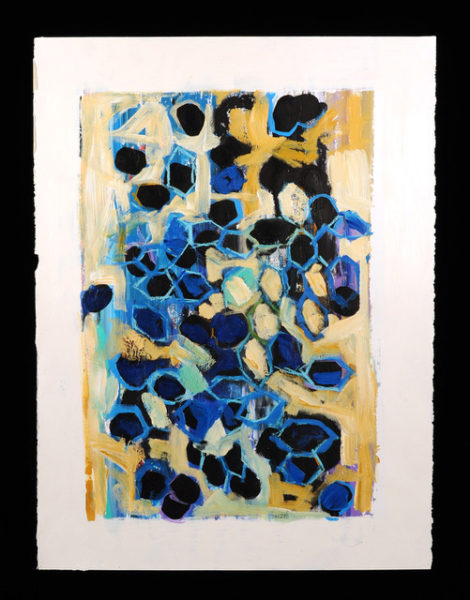 The holes in an orange plastic snow fence inspired local artists Katharina Keoughan and Joy Vaughan to collaborate and create the art in the “Snow Fence Paintings” show at Skidompha Public Library in Damariscotta, which runs through Tuesday, Jan. 31.

The Carey Gallery at Skidompha Public Library in Damariscotta presents the “Snow Fence Paintings” show, featuring work by Katharina Keoughan and Joy Vaughan, through the month of January. Vaughan and Keoughan are both well known in the area as teachers and painters.

The holes in an orange plastic snow fence inspired these two local artists to collaborate and create the art in the current show. Keoughan became intrigued with the variety of the oval shapes in the snow fence outside her studio. “I assumed they were identical, but they aren’t,” she said. Keoughan brought a section of the fence to Vaughan and suggested they use the design in their abstract collaborative work.

The two artists challenged themselves to use the motif in a body of work. One piece easily led to another and then another. Vaughan and Keoughan interpreted this simple pierced piece of plastic in countless ways, from a muted tranquil palette to a fiery explosion of red and purple. Both artists work on the same piece in the same session. They move from one painting to another, adding to, altering, or even obscuring what the other has done. As Vaughan said, “The process requires trust.”

Skidompha Public Library is located at 184 Main St., Damariscotta. The Carey Gallery encompasses the hallway near the library’s rear entrance from Elm Street. The Carey Gallery was established in memory of Parker Carey, of Damariscotta, who died in November 2012, and his wife Joyce, who died in 2008. They were, in the words of library director Pam Gormley, “devoted and tireless volunteers for Skidompha.” Parker Carey, whose favorite library job was reshelving books, was also for many years co-manager of the Skidompha Secondhand Book Shop. Works displayed at the Carey Gallery include art, crafts, photography, and posters, with preference given to local artists. The Carey Gallery offers exhibits year-round, with frequently changing exhibitions.