Roberta Goschke stands in front of an easel set up mere steps from her home and gallery on Bremen Road in Waldoboro. She is swathed in coat, boots, hat. Her black leather gloves are stained with a dull residue of paint.

In front of her a small stream winds through a snow-trodden yard up past a neighbor’s home in the background, up past the bare-limbed trees to the road, where traffic occasionally interrupts the quietude and the artist’s concentration.

This year in particular, Goschke is driven to face the rigors of plein-air painting in the chill of the Maine winter.

In the past, Goschke has often painted Maine en plein air with friends during more hospitable seasons. But with the enforced isolation of the pandemic she has painted less. And winter presents additional challenges. 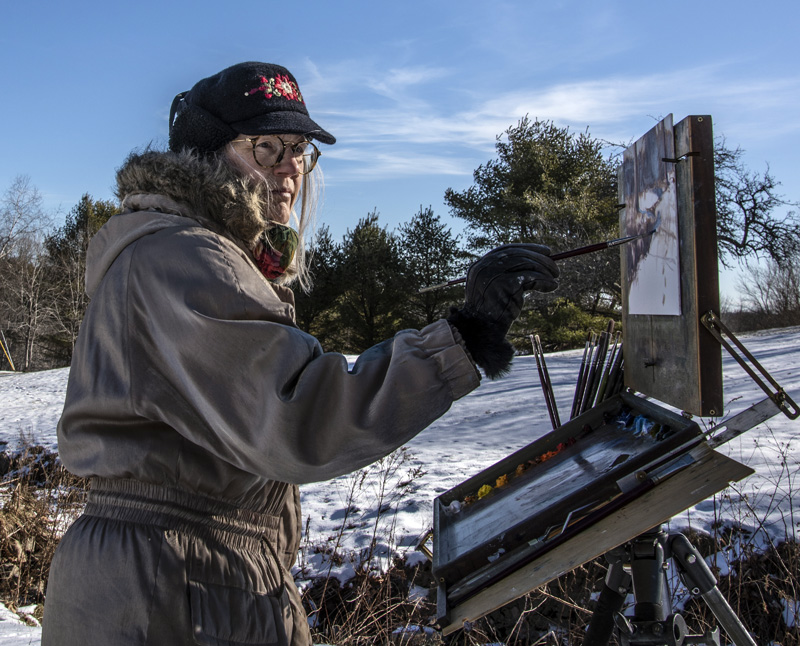 Goschke has suffered from art slumps during winter before. She is trying to combat that now, but it’s an effort. “It’s a major thing to go out there,” she said.

Goschke, who trained at the Art League in Alexandria, Va. while stationed there during her Army career, is inspired by the work of John Singer Sargent and the artists of Bucks County, Pa., where she grew up. Monet’s “Magpie” is her favorite painting of snow. “I wouldn’t call myself an impressionist,” she said. “More of an impressionistic realist.”

To Goschke, impressionism is more about color. “The realism comes from the drawing, the composition,” she said. “I know when I’m painting I have to exaggerate. I’m constantly making decisions about making an object a particular color — if it’s mostly a violet color, make it violet.” 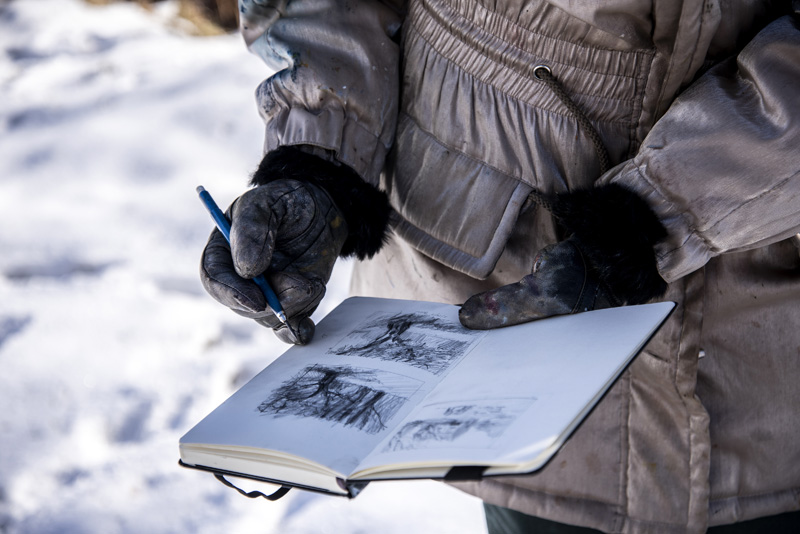 “In a group of bare trees, it’s all branches. All of them — it doesn’t have to be about individual branches. It’s about a color shape. A mere human can’t paint all the branches. You have to make an impression of the shape, decide what color they are when the sun hits them. There are lots of trees here — they change every day. The light is always a little different.”

Decisions must be made faster in the cold. “Big shapes first,” Goschke said. She often squints in order to blur the scene until she sees just the shapes. “Then gradually work into the details — but not too much.”

Goschke usually spends up to three hours outside, preferring to complete the painting in the same day. “It’s best to start and finish in one session,” she said, although she admits that she has been known to stop if the cold is too intense. For her, 30 degrees or above is better, preferably with the sun out. 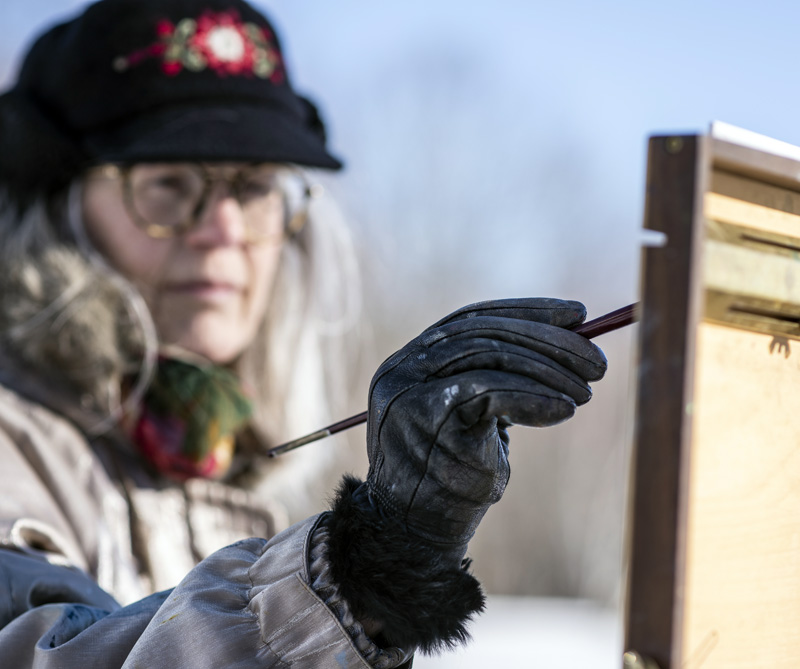 Roberta Goschke adds paint to a canvas in Waldoboro on Sunday, Jan. 10. Her black leather gloves, supplemented by hand warmers, help her hold a brush in the cold air. (Bisi Cameron Yee photo)

Goschke usually makes a pencil drawing in a small book before starting a painting, but this time of year she is more likely to draw a scene with a brush straight onto canvas. Drawing is an important part of her process.

“It’s the realism part, especially with buildings or structures or a boat — these require accuracy,” she said. She uses a viewfinder to find the scene she wants to paint. “It’s limitless outside,” she said. The viewfinder makes finding compositions quicker.

Painting en plein air in winter takes some preparation: “I have to suit up,” Goschke said. Her biggest challenge is her fingers. She credits her husband with introducing her to hand warmers. “Those saved me,” she said. But she still has to take off her gloves when she has to paint something intricate. “Fingers are the worst,” she said. “Everything else I can just put more stuff on.”

Goschke tries not to have preconceived ideas, but she does set challenges for herself. She knows she likes having buildings in her paintings:  a house, a barn, a church. But she wants to focus more on the organic things, like trees and streams and water and snow. “Snow in shadow is a color,” she said. “Shades of blue, mauve, pink.” 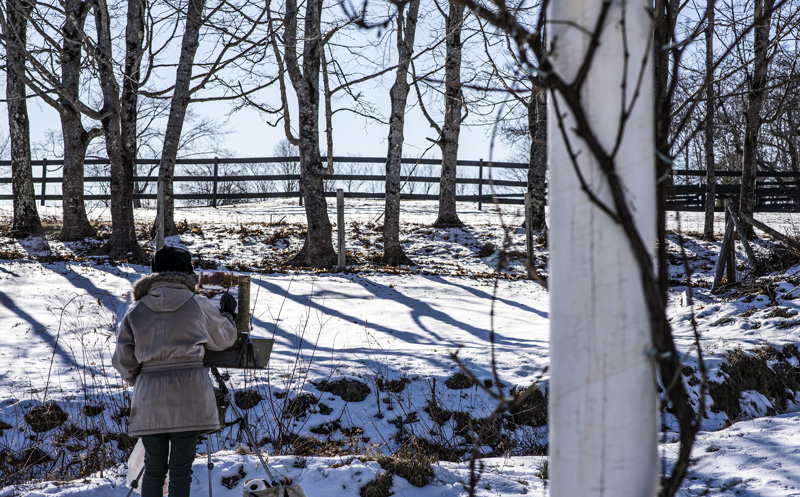 Roberta Goschke paints en plein air in Waldoboro on Sunday, Jan. 10. During the last year, the restrictions of the pandemic have given Goschke the opportunity to explore her neighborhood in her paintings. (Bisi Cameron Yee photo)

“This year I really want to paint bare trees and make them look like a group of trees,” she said. “Without noodling around — because it’s cold.” She wants to focus on being decisive.

Goschke often paints at a neighbor’s house far from the road, “secluded, quiet, except for a very active bird feeder.” There she “stands in one place for hours. The birds forget I’m here. I can watch them and hear them. It’s just wonderful.”

She described how a hawk landed on a pole a few yards away from her. “It looked over its shoulder at me for a second or two, and then took off. It was a nice moment, all by myself,” she said.

“Sometimes in the winter when it’s really sunny, the air is so crisp, so clear. The sky is such an intense blue,” Goschke said.

“That’s why I go out in winter; just being out there feels like going out to meet life.”