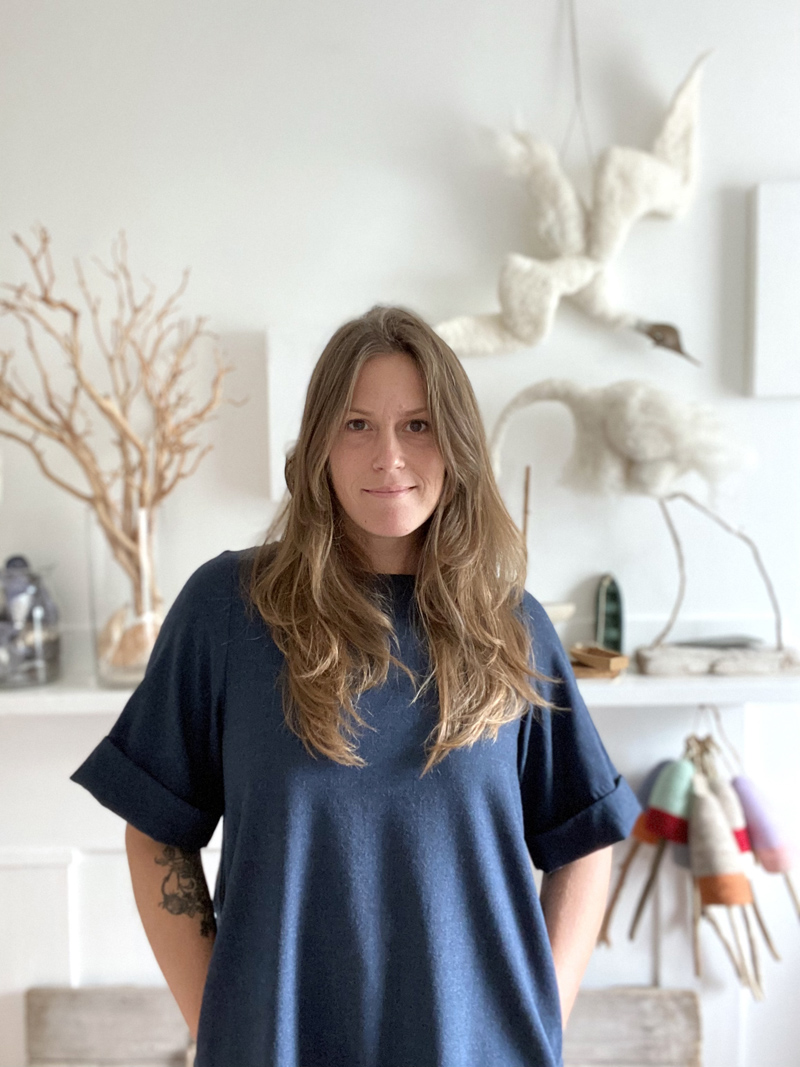 At low tide, when the sandbars were exposed and islands became temporary peninsulas, there was a mussel bed that stretched out in undulations of blues, purples, blacks, and browns. Iridescent in the low water. This is how Michelle Lee Provencal described the Biddeford beach of her childhood: Alive, wild, the shellfish abundant.

“You had to wear flops or old sneakers to walk across it,” recalled Provencal, as she picked up a ceramic mussel she designed and crafted. A jar of sun-bleached mussel shells sits on the shelf in her studio among similar collections of other specimens.

Above an old industrial artist’s work table – her grandfather’s – small clear bags of specimens are pinned to the wall: Dried sand dollars, sun-bleached mussel shells, scraps of oysters, sea urchins. Each collection was labeled with a naturalist’s precision.

But Michelle Lee Provençal is not a naturalist, at least not by training. Provençal is an artist, the owner of Thirdlee & Company.

In her studio, one room of her historic Waldoboro home, a photograph of kelp knotted to a mussel shell, both dried and stiff, illuminates her clean computer screen.

Around the studio: Stacks of thin wooden boats used as models by a painter, a ceramic candle holder shaped into sea creatures, glass bowls, driftwood, an antique wooden filing cabinet, felted creatures, fishing lures. The room articulates itself like she does. A sense of order, generosity, composition so that natural objects and natural imprecision in shells colors and curvatures stand out.

“It’s different up here,” said Provencal, removing felted sculptures from their storage container. She set them up on the work table, gently pulling their legs until they could stand on their own.

Provencal moved to Waldoboro with her husband Andrew DeGraff, an illustrator who teaches at Maine College of Art, during the early days of the COVID-19 pandemic. Without many spaces to socialize or events, it has been difficult to connect to other artists in the area.

“There’s a lot up here. There’s a lot going on,” said Provencal. “And there’s a lot of people I’m interested in, but I just haven’t been able to get out to events – or there haven’t really been any.”

She found other ways to relate to this place. She reads from the local history books for sale in town. She learns about shipbuilding, marveling at the wharves that once lined what is now Pine Street. Come elver season, she watches the harvest from her home.

“It’s such an impressive rig that they have. And like, it’s really beautiful. And just for me, as someone who appreciates form and function … I think they’re wonderful,” she said of the nets and other gear used by fishermen. “But I haven’t asked any questions or really met anybody yet. I just let them do their thing.”

Provencal has asked questions of her surroundings, paging through local history books to learn about the shipbuilders, the other houses on her street, to probe into the past of a place. She posits about her own home, who might have lived there once.

She mentioned meeting a couple who live a few houses down who share a lot in common with her and her husband, both artists, no kids, working in at-home studios, looking out at the same river. But it took them months to meet. For artists who have moved to Lincoln County over the past few years, finding community has proven challenging, even for those who are well-connected or visible elsewhere.

Provencal’s felted ornaments – an income source for her, along with freelance design work – are coveted among summer tourists and visitors. Like others in the area, the unpredictability of the past few summers has worn on her.

But the new environment has also fed invention – a slow, attentive kind of invention, most noticeable in Provencal’s felting. 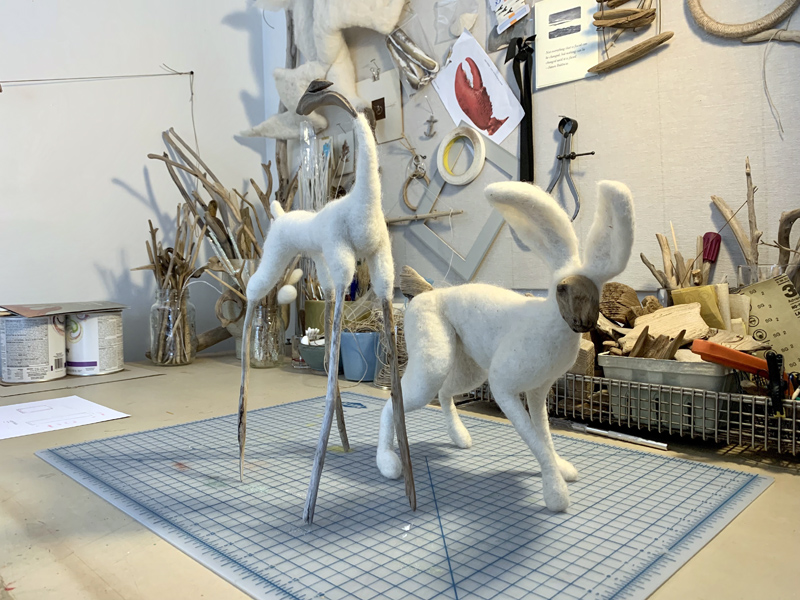 Provencal uses wool and driftwood to sculpt creatures like these along with maritime ornaments. (Anna M. Drzewiecki photo)

“I started felting because it was very different from what I’ve been doing,” said Provencal, who worked as an industrial designer at companies including Anthropologie, Pottery Barn, Macy’s and others after studying industrial design at the Pratt Institute in Brooklyn.

“I wanted to do something more personal, but I didn’t want to have the limitations of what I know. Like, if I’m going to be working in wood, I feel too restricted by the things I already know about that material.”

She is interested in the notion of keepsakes, what keeps, what memories objects retain, their ability to transport. The singular, the delicate, the precise. She renders intimate and proximal creations, sand dollars, moon shells, boats, ornaments for strangers’ Christmas trees.

Her studio is an ecological world, intricate, ever-changing, purposeful, the full range from seeds of new projects to decomposing remnants of the old. The living and the still, the geometric and the soft.

There is slowness and natural precision to her newer work, scaled down from the industrial, the decorative, the thematic. There are the felted creatures, like a Medieval bestiary incarnate. Some ceramics, ornaments, felted birds, felted shells, prototypes for a to-be-announced collaborative project.

“I knew what it was. And I knew what it could come out like. But I had never done it. I needed something like that, something totally new to me,” said Provencal of felting. To be able to make mistakes, she said, was critical. And to not be burdened by her own expectations or rules. “I really like needle felting. It’s very personal.”

Her felt creatures are architectural but changing, with imagined bodies conjured into a folkloric material existence, like the forms mapped onto clouds. The perfect curvature of a felted rabbit’s haunches is caught in the afternoon light, set up on the table in her studio.

Or is it a rabbit? There is wonder in these unnamed animals, allowing the creatures, as Provencal called them, to be both real and imagined.

“You build the body. You give it this life. But then over time, driftwood is driftwood and it’s going to dry further or it’s going to crack or some of them will start peeling. And so that face starts to change over time, which is sort of interesting,” said Provencal, about her creatures.

Provencal still goes down to southern Maine often, to the beaches she used to visit as a child. Some of the driftwood she uses still comes from her mother’s collections, which she acquired when her mother passed away a few years ago, part of why she had moved north to Maine.

But living on the Medomak River, icons, images, colors, and textures of the new environment have started to emerge in her newer work, too.

She explained the driftwood tree in the corner of her studio, which supports ornaments sculpted out of fishing bobs and lures, the bright pinks and reds, electric green talking back to the natural tones of the driftwood scraps, the white felt, the sun-bleached shells. She talked about them as a sort of “woods and waters version” of her lobster buoy designs.

“I sculpted an antler out of felt because I was working on some other ceramic project and I just need to visualize the form,” she said, a piece that helped her think towards more forest-themed aesthetic.

“After so many years doing the job that I really love doing, at such a mass scale, it’s really easy to see how wasteful that can be,” she said. “What I like about making fewer things and more special things is that it, it helps me get away from that.” And each piece is unique, unlike the home décor she used to design, which would be produced then replicated in homes across the country, sometimes the world.

She has been selling in local shops, but the demand has put pressure on her practice.

“All of a sudden, you become a factory instead of an artist,” said Provencal. She did three product releases this holiday season, each one selling out so quickly she had customers calling her on the phone asking her to make more.

“What’s the best way to repeat this thing over and over again, but still find the joy in it?” Provencal mused. She is working on figuring out her balance between making a living and simply making.

“It’s really wonderful that people like it enough to do this and to support it and want it in their life. That’s so special. But I never feel like I’m doing enough so – I should be felting right now, and I should probably be felting all day starting January first!” she said. “But I need … some headspace for whatever else I am going do. Can I do something else? Do I have time?” 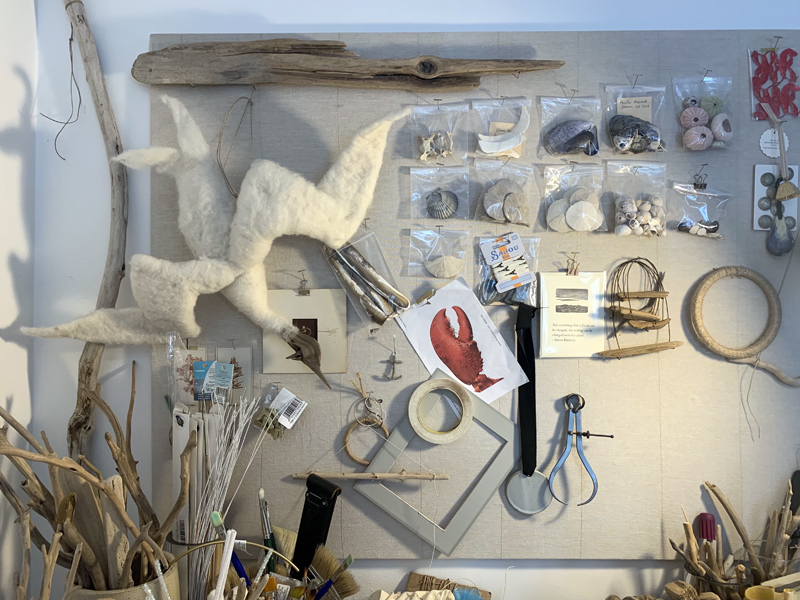 Like mussel seeds dispersing in the water, Provencal’s mussels disperse with the tides of tourism, brought home to Australia, Germany, Kansas, Maryland, South Carolina, etc. “Places where the coastal lifestyle is really important, as well,” she said.

Aside from her website, Provencal has shared her felting through a few workshops and even one private party. The workshops usually attract knitters and jewelry makers. She hopes to do one with other local makers soon, to bring together different sensibilities, different expertise, different perspectives on the material.

“It is super fun, to sit there for about three hours, and just say tell me more, tell me more,” she said of chatting with new felters in her workshops, especially a few who work in the aquaculture industry.

To Provencal, the world is giving – there are creatures in each knot of driftwood, and to colors and textures, an endlessness.

Except the mussel beds she remembers from her childhood are gone now, replaced by mudflats.

Provencal spoke about sustainability. She described the anxieties of waste and pollution that started to weigh on her in her previous work.

It is one thing to think about more sustainable packing and shipping of a product to one’s home – but before a product is even available, there is the whole design process, samples that get shipped, trial and error, travel to and from factories, until the design and final product are synchronized. Plus the labor that is going into every step of this process.

To felt a moon shell, it takes 11 different colors. To felt a horse mussel, it takes more purple than it does to felt a sand dollar. To felt a creature with a driftwood head, it takes time.

“I’d really love to find something I feel just as strongly about that has a function,” she said. “That’s practical, and probably more useful. As a designer, I think that would be fantastic. But I just haven’t figured that out yet.”

But she is still experimenting, imitating seaweeds and bones with wire, manipulating fiber into marine bodies, completing home décor designs for freelance assignments. Meeting neighbors, now and then. And planning slowly for spring – for the world to open up again.

The studio is not open to the public at this time, due to COVID-19.