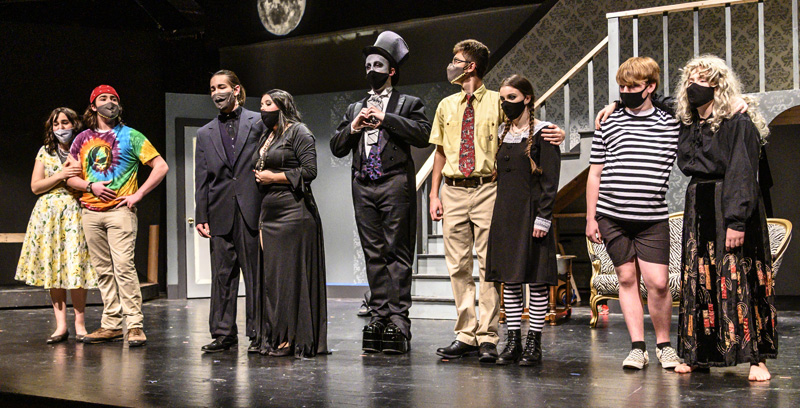 Kolyn Mattson as Lurch (center) makes a heart with his hands during the final scene of the dress rehearsal for Medomak Valley High School’s presentation of “The Addam’s Family” in Waldoboro on Oct. 23. (Bisi Cameron Yee photo)

They’re creepy and they’re kooky, mysterious and spooky, they’re all together ooky and they’re coming to the Ronald E. Dolloff Auditorium at Medomak Valley High School for six shows and two matinees.

The Medomak Valley Players will open their annual fall musical, “The Addams Family,” on Thursday, Oct. 28 and the community will be (trick or) treated to a joyfully macabre comedy full of delightfully dark humor, an array of eerily odd characters, dancing ancestral ghosts, and three or four love stories for the ages.

On Oct. 23 the cast gathered for its first dress rehearsal. Decked out in suitably somber garb by costume director Kerry Weber, they were ready to run through the full production to eliminate any blips in lighting and sound. And to finalize where to pause to allow the jokes to land.

The cast is already polished. They all secured their roles at the end of the last school year and senior Owen Weber, who plays Gomez Addams, had them running lines all summer, according to director Peter Stuart. They came to the rehearsal with their parts already memorized, their songs and dances already practiced.

That preparation showed as they jitter-bugged and bunny-hopped and tangoed and emoted their way across the stage.

Owen Weber, who calls Gomez Addams “by far the most colorful character” he has portrayed, brandished a sword and an accent with equal aplomb.

Lucy Jameson as Morticia owned the staircase she sashayed down in a slinky black dress with a thigh-high slit, found by Kerry Weber in a vintage thrift shop in Farmington.

Jameson, whose hair is short and blonde, said she is the “polar opposite” of Morticia. “I’m really bubbly. At first it was really hard to jump into that character and be all spooky.”

Ella Donaghy as Wednesday mastered the sullen expression often found on the faces of angsty teenagers like her character. “It’s really fun to play mean and dark,” she said.

Stuart was pleased with the rehearsal. “I don’t think we missed a line tonight.” He said the cast came in “nearly off book, which is phenomenal. We were able to really hit the ground running and it’s just gotten better from there.”

“The Addams Family” was originally conceived by American cartoonist Charles Addams as a one-panel comic that delighted the readers of the New Yorker Magazine for 50 years. There has been any number of iterations of the black-garbed, sallow-complexioned family over the years, from the iconic television show of the 1960s, to a pair of popular movies in the 1990s to this musical, which first debuted on Broadway in 2010.

With an original book by Marshall Brickman and Rick Elice, and music and lyrics by Andrew Lippa, the play was not based on the TV series or movies, but on the original cartoons.

Brickman and Elice fleshed out a new story focused on Wednesday Addams’ attempt to introduce her boyfriend’s respectable family to her own, slightly more unusual relatives while keeping the seriousness of the relationship from her extremely strong-willed mother.

Over the course of the play, Wednesday wraps her father around her little finger, as daughters often do, and Gomez Addams finds his own romance at risk as he contemplates the magnitude of keeping a secret from his wife.

“The Addams Family” is the first full production show for the school since the advent of COVID-19 and one challenge the cast had to prepare for was performing in masks. They had done it before – Kerry Weber sewed more than 70 masks for the spring review.

“It’s a challenge, especially with a mic,” Jameson said. “It falls down a lot. Sometimes it’s hard to breathe… but I know it’s necessary. I’m happy we’re even able to do a show with COVID.”

Part of the challenge is that masks impact facial expressions. “We’re trying to do a lot with our eyes and our hands and our motions,” Jameson said.

According to Stuart he chose “The Addams Family” for the fall musical because he felt he had the right cast, and because he wanted to get people in the seats. “It’s a popular, fun kid’s show. Something that families would come to.”

The Medomak Valley Players rely on ticket sales to fund the drama program. They get no money from the school district, and not doing a show last year “hit the bank book a little bit,” Stuart said. “We needed to try to do a show where we can bring people in.”

Volunteers Robyn Sykes, Tegan Baldwin, and Kim Fletcher, as well as the “Thursday night” tech crew brought their expertise to the production, as well.

No tickets will be sold at the door. Masks will be required at all performances, as well as socially distanced seating. For more information, contact Peter Stuart at 832-5389, ext. 132.