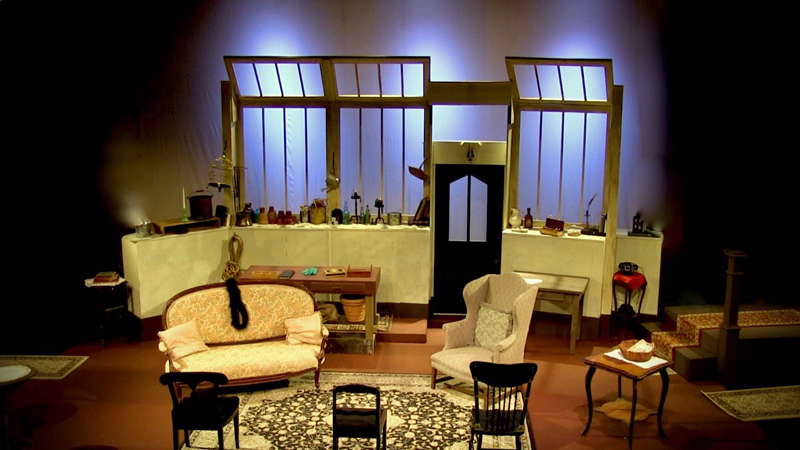 The stage is set for Heartwood’s drama, “The Chalk Garden,” by Enid Bagnold. (Courtesy photo)

Heartwood’s stage is set to present Enid Bagnold’s drama, “The Chalk Garden,” May 20 – 28, in the Poe Theater.

“Back in Heartwood’s earlier years,” Executive Director Joy Braley said in a news release, “we produced annual winter dramas (affectionately referred to as our ‘Janu-Dramas’) in the atrium of Skidompha Library. It was somewhat of an unlikely performance space, but Skidompha was gracious, audiences flocked in, and we packed people everywhere – even on the stairs (we supplied cushions) and in the balcony. ‘The Chalk Garden’ is just such a piece, and we’re excited to share it with audiences this spring.”

“The Chalk Garden” tells the story of the overbearing Mrs. St. Maugham (Carol Florman) and her granddaughter Laurel (Rebecca Tomasello), a challenging child, much in need of care.

In Act One, a new governess, Miss Madrigal (Nanette Fraser), is hired to bring balance to the household. Her secret past becomes an intrigue to Laurel and the manservant Maitland (Jason Iannone). When Laurel’s mother, Olivia (Teralyn Reiter), arrives to reclaim Laurel back into her life, a battle ensues with Mrs. St. Maugham. Finally, Mrs. St. Maugham’s lifelong friend, a Judge (Tim Cunningham), arrives for luncheon … and the lives of the characters intertwine during Acts Two and Three.

The setting is the solarium of St. Maugham’s Sussex home, part potting shed and part sitting room. Struggling for balance in a rapidly changing time in British history, the past and the future of Mrs. St. Maugham’s world subtly shift and collide, as each character in the story chooses – or is forced – to face personal transformation.

First staged in the U.S. in 1955 and the next year in Britain, the play sits in theater history at the end of drawing room or comedy of manners style productions, while weaving drama, comedy and a wistful sense of the memory-play into a unique script – one of the only plays by Bagnold.

The play is performed in two acts with a very brief intermission. Total running time is approximately one hour and 45 minutes.

Tickets are $5 for students through college and $20 for all adults. Reservations  are recommended by emailing info@heartwoodtheater.org or phoning Heartwood at 563-1373.