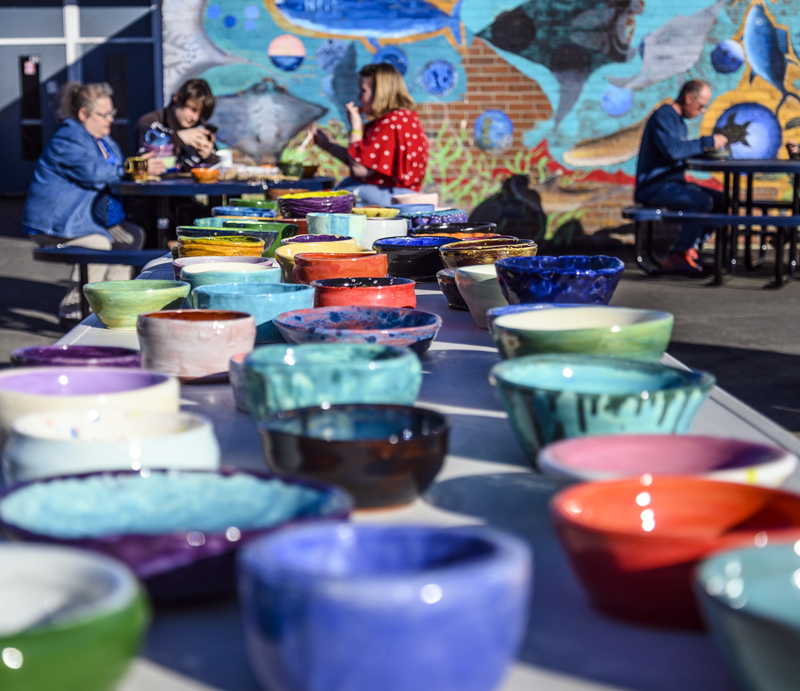 Medomak Valley High School celebrated the 20th anniversary of its Empty Bowl Supper on Wednesday, May 18.

Back in 2002, MVHS student Crystal Priestley was looking for a community service project and art teacher Krisanne Baker suggested she host an Empty Bowl event.

According to an article by Dana Velden posted on food culture website thekitchn.com, the Empty Bowl concept has been around since the 1990s when a ceramics teacher challenged his students to throw enough bowls to host a meal. The money raised from the sales was donated to food-related causes. The concept took off and Empty Bowl events worldwide still raise money to fight hunger in their communities.

Baker and Priestly were inspired by that tradition and MVHS ceramics students that year threw 80 bowls and brought in around $600 for local food pantries. The Empty Bowl Supper has been a beloved tradition in the community ever since.

This year, students threw 200 bowls, and the event has earned $1,300 and counting. Unsold bowls are still available and on display at the Waldoboro Public Library.

MVHS offers four levels of clay classes. Students in Clay 1 make four bowls and Baker chooses the best two for the sale. In the more advanced classes they make eight, with six added to the total inventory. “They get excited about it,” Baker said.

Students learn about community service and once involved can develop a love for helping. “I’m hoping it sets a precedent,” she said. One that will inspire MVHS students to make community service a priority throughout their lives.

Baker gives her students’ creativity free rein with two specifications: the bowls must be large enough to hold a meal, and she insists that the bowls have a footing. As part of the clay classes at MVHS students learn about Japanese ceremonial tea vessels. “We talk about the footing being something that raises the vessel up off of the surface, that it’s a sign

“I encourage them to not just make round things but to play with the shapes, change the shapes, make them unique,” Baker said. And among the traditional round bowls with their colorful glazes, there are a few anomalies: a purple bowl like a bunch of grapes cut in half, a pink bowl with a pouring spout.

The event also featured a silent auction with work by Baker and students who took on special projects, creating something more challenging, with an unusual form or a detailed glaze pattern.

Baker collects bowls from the sale herself, and brings them in as examples and inspiration when her students start their Empty Bowl projects. A favorite from her collection of student work features a fish snout with an almost human face. Baker called it “very unusual and surreal in style.” As an artist who is constantly inspired by the ocean and its creatures in her work, Baker couldn’t resist it.

As far as glazes go, students “have total carte blanche,” Baker said. Students research glazes beforehand, creating a “glaze tile” to explore what happens when one type of glaze overlays another.

“It’s fun, because when somebody comes up with a really cool, wow result, everybody’s like ‘what’d you use?’” Baker said. “And they know because they’ve done the work to figure it out.”

A new addition to the event this year was a bake sale with homemade goods from students in the school’s Jobs for Maine Graduates program. The program helps students build real world skills and provides career guidance to help them succeed after graduation.  The money raised by the bake sale will help provide a rack of professional clothing and shoes for the classroom to be used in presentations or job interviews.

Baker said she saw some students she hadn’t seen in 20 years at the event. And plenty of more recent graduates, including what she called a “baby brigade” of happy parents dropping by to support their alma mater and introduce their children to their former teachers.

Former student Yannick Price-Prevot came with his family. He took clay class 13 or 14 years ago and was dissatisfied with the small ball of clay he was offered to start, asked for more. He is still remembered by Baker and fellow MVHS art educator Brooke Holland for throwing the largest bowl in his class.

The Smith sisters were also on hand, supporting younger sister Quinn, an MVHS senior named Artist of the Year for the class of 2022. Taylor Smith was Artist of the Year when she graduated in 2017, and Baker recalled that Morgan Smith, who graduated in 2018 “just about lived in my room for a year working on the pottery wheel. She would come in and keep working at it and working at it. She got really, really good at it without even taking a class.”

Holland said the trio should form “Three Sisters Pottery” and according to Baker, Taylor Smith is looking into buying a pottery wheel.

She would be in good company. Twenty years after initiating the Empty Bowl Supper at MVHS, Priestley is now an elementary art teacher in Warren. She has a pottery wheel, a home studio, and still throws bowls.