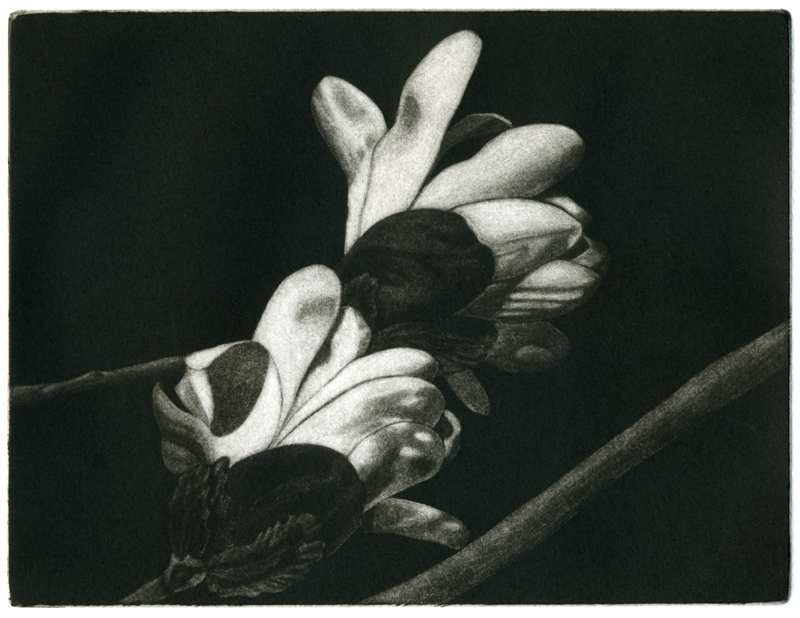 A mezzotint of a magnolia by Mary Boothby.

The Waldo Theatre will be one of the stops on Saturday, June 9 at ArtWalk Waldoboro, which is held on the second Saturday of each month in June-October, from 4-7 p.m. There are 13 stops along the walk, including galleries, studios, shops with featured artists, and the Waldoboro Historical Society. The Waldo Theatre will give tours, have an activity for children outside, and be featuring the work of local artists on its walls. To learn more about ArtWalk Waldoboro and to find a map of the route, go to artwalkwaldoboro.com.

The Waldo’s featured artists for June 9, the first of the summer art walks, will be Mary Boothby and Erica Qualey. Their artwork will hang on the theater walls that remain in good condition and will be on display during art walk only. Both artists have a connection to theater: Boothby has worked on and off stage at Heartwood Regional Theater Company, and performed at the Waldo in her youth, and Qualey has occasionally helped create sets for Heartwood.

Boothby is an illustrator and printmaker residing in Bremen. Her work was represented at Bayview Gallery in Camden, and she recently had her prints accepted into a juried group show at River Arts in Damariscotta, where one print received the Juror’s Choice Award. Boothby’s recent focus has been in mezzotints, which she describes as “a multiple-step process that can achieve an amazing range of tones including an intense, velvety black.”

Qualey is a painter and illustrator residing in South Bristol. Her focus has been on watercolor painting and illustrations, and she recently finished a commission for a children’s book, “A Little Bit Lost,” by Brenda LaFrance. The work Qualey will be displaying will be a mix of traditional watercolor rag paper and watercolor batik on a translucent rice paper.

After ArtWalk Waldoboro, one can head up the hill to Odd Alewives Farm Brewery, located at 99 Old Route One in Waldoboro, for a movie night to benefit the Waldo Theatre.

Odd Alewives will have beer, the Waldo will bring the popcorn, and everyone can enjoy Cary Grant and Rosalind Russell in “His Girl Friday,” one of the greatest comedies ever made.

The event is free with a suggested donation for the popcorn, all of which will go toward the Waldo Theatre’s renovations. To learn more, go to waldotheatre.org.