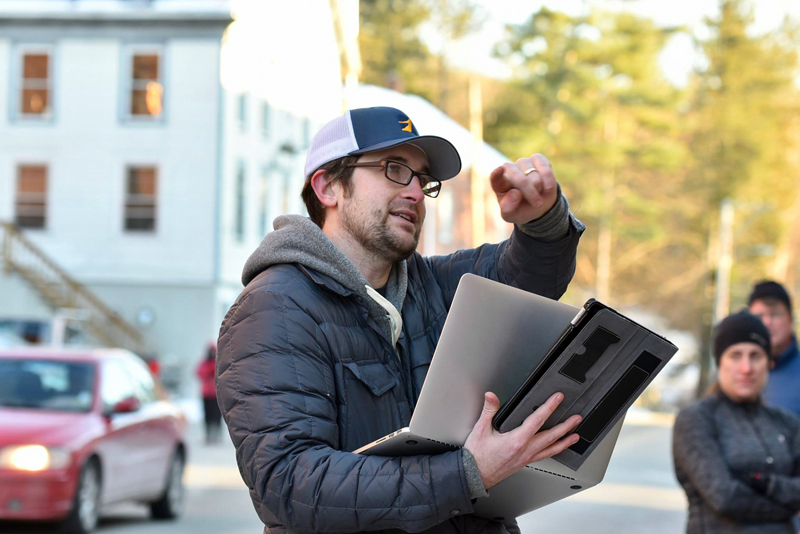 When he’s not making lip balm, organizing road races, or taking stats for a local high school basketball team, Waldoboro native Lucas McNelly makes films. This September, he plans to shoot his next one, “Maine Noir,” in his hometown.

The film will be McNelly’s third feature. “Blanc de blanc,” was released in 2009 and is now available to watch on Amazon Prime, while “Up Country” will premiere on the festival circuit this fall. He also made two short films, “L’attente” and “Gravida,” the latter of which has racked up more than 235 million views on YouTube.

While two scenes from “Up Country” were filmed in Waldoboro, McNelly said he believes “Maine Noir” will be the first to be completely shot in the town.

The story centers on a woman and her daughter who get a fresh start on life after moving into a house they inherited in Waldoboro. After someone breaks in one night, they discover that not only is there is $3 million hidden in the walls of their new home, but someone wants their money back.

“So the movie starts full of hope and possibilities, but it ends with none of that,” McNelly said. “Well, I think it has plenty of hope at the end, just not for all people.”

McNelly, now a Damariscotta resident, wrote the first draft of “Maine Noir” in 19 days this spring. It was the second script he finished during the pandemic.

“I had finished a different script for a road trip movie, but with the pandemic still happening, it was probably not something that was going to happen for a while,” McNelly said. “I started thinking about what I could write and shoot utilizing resources I either had or could get locally and also what wouldn’t require crossing state lines or going to a bunch of places where people wouldn’t be vaccinated.”

With these constraints in mind, McNelly began to consider film noir, a genre categorized by moods of pessimism and menace made popular in the 1940s and 1950s. Some of the classic-era films of the genre include “The Maltese Falcon,” “Detour,” and “D.O.A.”

McNelly referred to film noir directors as “the indie filmmakers of their day.”

“I knew whatever I made would have to be fast and cheap, and that’s the film noir wheelhouse,” he said.

Waldoboro lends itself to the genre, as it has a mix of “beautiful” architecture, as well as industries like clamming and fishing, McNelly said. The script features well-known locations and landmarks, including Moody’s Diner, Broad Bay Congregational United Church of Christ, the Waldo Theatre, Odd Alewives Farm Brewery, and the Clyde L. Sukeforth Memorial Field.

“The goal of this is to showcase Waldoboro,” McNelly said.

With the script finished and September dates eyed for shooting, McNelly, a former crowdfunding consultant, is currently fundraising to get “Maine Noir” off the ground. He launched a campaign on Seed&Spark, a crowdfunding platform for creative endeavors such as film shorts and features.

The “Maine Noir” campaign launched Monday, July 26, with a goal of raising $45,000 in 30 days. The campaign is “all or nothing,” McNelly said, meaning that the goal will have to be reached for the movie to be made.

However, even if people cannot support the film financially, they can follow its progress at mainenoir.com.

“If someone can’t give money, it’d be great if they could share the campaign along so more people know what we’re trying to do,” McNelly said.

In addition to the Seed&Spark campaign, McNelly is also promoting the film through community outreach projects. Long Winter Soap Co., the business he co-owns with his wife Amanda Nelson, released a new lip balm aptly named “Noir,” the proceeds of which will go toward the film.

For more information, email McNelly at lmcnelly@gmail.com, visit mainenoir.com, or find the movie on Facebook and Twitter.