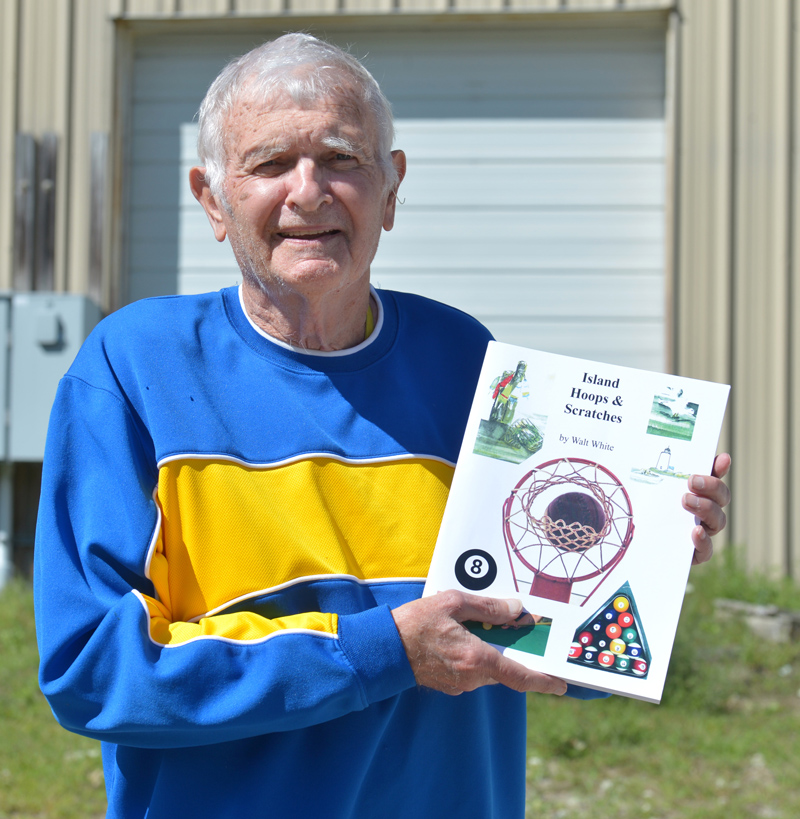 Walter White, of Waldoboro, holds a copy of his second sports history book, “Island Hoops & Scratches,” which is about playing basketball and billiards on Vinalhaven. (Paula Roberts photo)

Walter White, of Waldoboro, recently released his second sports history book, “Island Hoops & Scratches,” which is about playing basketball and billiards on Vinalhaven.

In the 388-page, 8-by-11-inch book, White gives details of the origins of each sport and the history of each sport on the island.

Six chapters are dedicated to billiards, which White played for 20 years on the island in his youth. These chapters are “Island Pool and Billiards,” “Sim’s Pool Room,” “Greene vs. Lincoln,” “The Bathroom Problem,” “Pocket Pool and Non-Pocket Billiards,” and “Island Players and Our Vocabulary.”

White called Sim’s Pool Room his second home, where he was introduced to the sport before he could walk. “Usually what was spoken or took place in our pool hall stayed there, and for various family reasons Gram Anderson and Lilly White never heard about it,” White wrote.

He was one of the Vinalhaven rack boys at an early age. Conversations on politics, communism, war, and baseball were commonplace and provided him with quite an education.

In Chapter 3, White describes a matchup between two old-timers born in the late 1860s. White had the honor of being appointed rack boy and wire counter of the historic match, which featured Allie Greene (Greenie) vs. Bill Lincoln.

In Chapters 7-10, White explores off-island billiards and pool stories, including a women’s championship team based in Waldoboro.

“Today, both games for islanders are on much different roads. Hoops is now on a fast, exciting highway, enjoyed by thousands of island fans over recent years. Billiards, or as commonly called pool, is now on a grown up, small forgotten foot trail to oblivion. This game, once popular for many decades of Vinalhaven history, has sadly almost vanished from the island sports scene altogether,” White wrote.

The final 260-plus pages of the book are dedicated to basketball on Vinalhaven, with a few inserts on White’s coaching days at Lincoln Academy.

The history of basketball on the island is divided into three chronological increments, 1898-1949, 1950-1990, and 1991-present. The island’s first basketball team was the Ariston Club. “I am not sure what type of baskets or nets were used, but surely they looked nothing like those of today,” White wrote.

Readers with no connection to Vinalhaven will enjoy this walk through history, with its amusing tales and personal stories.

In the final pages, White issues a special dedication to three departed friends, Raymond Sennett, Nate King, and Bob Gilbey. “These three friends were given this special dedication as each man in his own way taught me the same philosophy that Larry Hopkins demonstrates and former Lincoln Academy hoop star from 38 years ago, Biz Williamson, is giving her mom. It is nice to be important, but far more important to be nice,” White wrote. He included part of a Lincoln County News article about Biz Williamson giving up her corporate job to work in a nursing home so she could visit her mother during the COVID-19 pandemic.

“I hope reading ‘Island Hoops & Scratches’ will bring back reflective memories of enjoyable times that are now quickly fading into the distant past of island history,” White wrote.

White will be selling his books on Vinalhaven. To pick one up on the mainland, call him at 832-7634.