Harbor Theater presents “Stronger” on Thursday and Friday afternoon, Nov. 2 and 3 and “Battle of the Sexes” starting Friday evening, Nov. 3.

“Stronger” is the inspirational and heroic true-life story of Jeff Bauman (played by Jake Gyllenhaal), the man whose iconic photo from the 2013 Boston Marathon bombing captured the hearts of the world.

Jeff goes to the marathon to watch his ex-girlfriend, Erin (Tatiana Maslay), and is caught in the bomber’s path, losing both legs above the knee. After regaining consciousness in the hospital, Jeff is able to help law enforcement identify one of the suspects, but his own battle is just beginning. Family problems, and his new condition and newfound fame, plague him as he embarks on a long journey to physical and emotional rehabilitation. The film is based on Bauman’s New York Times bestselling book, co-authored with Bret Witter.

All Thursday and Friday matinee tickets are $6.

‘Battle of the Sexes’ 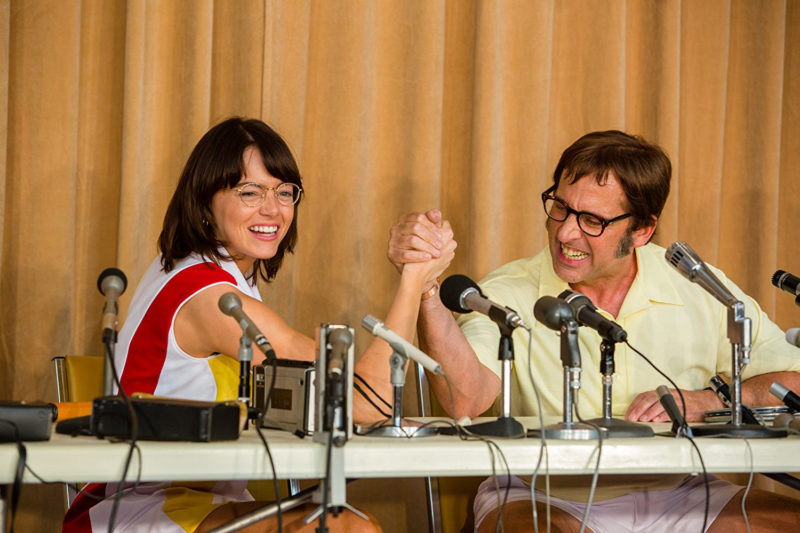 Emma Stone stars as Billie Jean King and Steve Carell stars as Bobby Riggs in “Battle of the Sexes,” playing this weekend at Harbor Theater.

In the wake of the sexual revolution of the 1960s and the rise of the women’s movement, the 1973 tennis match between women’s tennis champion Billie Jean King (Emma Stone) and former men’s champ and serial hustler Bobby Riggs (Steve Carell) was billed as the Battle of the Sexes and became one of the most-watched televised sports events of all time, reaching 90 million viewers around the world.

As the rivalry between King and Riggs kicked into high gear, off the court each was fighting more personal and complex battles. The fiercely private King was not only championing for equality, but also struggling to come to terms with her own sexuality, as her friendship with Marilyn Barnett (Andrea Riseborough) developed. And Riggs, one of the first self-made media-age celebrities, wrestled with his gambling demons, at the expense of his family and wife Priscilla (Elisabeth Shue). Together, Billie and Bobby served up a cultural spectacle that resonated far beyond the tennis court, sparking discussions in bedrooms and boardrooms that continue to reverberate today.

“It’s game, set, and match for ‘Battle of the Sexes,’ a massively entertaining account of the momentous 1973 tennis match between Billie Jean King and Bobby Riggs that also deftly deals with the numerous social issues inherent in the carnival-like contest,” said Todd McCarthy of the Hollywood Reporter.

The new, nonprofit Harbor Theater offers first-run movies, independent films, documentaries, and classics. First-run movies will be shown Friday, Saturday, Sunday, and Wednesday. The theater is closed Mondays and Tuesdays during the off-season. Documentaries, independent films, and classics are shown on Thursdays at 2 and 7 p.m. and Fridays at 2 p.m. Ticket prices have been reduced to $10 for adults and $8 for those age 18 and under. Theater members get a $2 reduction off the regular ticket price. All tickets for Thursday and Friday matinees are $6 and membership discounts do not apply.