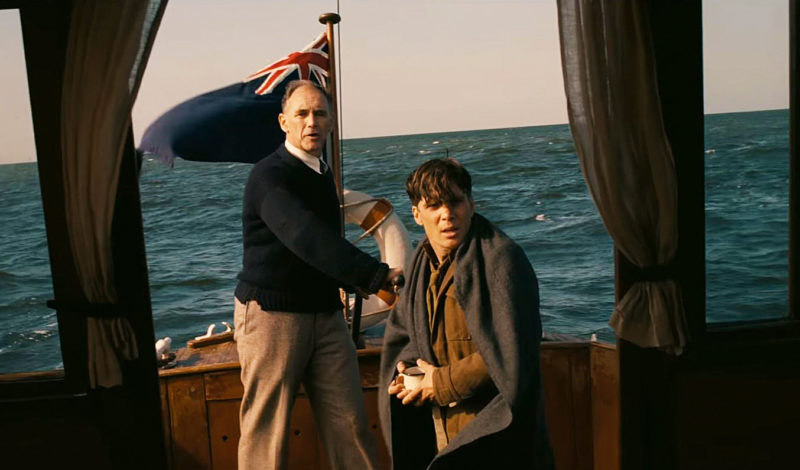 Cillian Murphy and Mark Rylance appear in a scene from “Dunkirk,” playing this week at The Harbor Theatre.

Based on the real-life courtship between Kumail Nanjiani and Emily V. Gordon, ‘The Big Sick” tells the story of Pakistan-born aspiring comedian Kumail (played by Kumail Nanjiani), who connects with grad student Emily (Zoe Kazan) after one of his standup sets. However, what they thought would be just a one-night stand blossoms into the real thing, which complicates the life that is expected of Kumail by his traditional Muslim parents. When Emily is beset with a mystery illness, it forces Kumail to navigate the medical crisis with her parents, Beth and Terry (Holly Hunter and Ray Romano), whom he’s never met, while dealing with the emotional tug-of-war between his family and his heart. “The Big Sick” is directed by Michael Showalter and produced by Judd Apatow and Barry Mendel.

“The Big Sick” is rated R for language, including some sexual references. It runs 124 minutes and plays through Thursday, Aug. 10 at 7 p.m.

In May 1940, Germany advanced into France, trapping Allied troops on the beaches of Dunkirk. Under air and ground cover from British and French forces, troops were slowly and methodically evacuated from the beach using every serviceable naval and civilian vessel that could be found. At the end of this heroic mission, 330,000 French, British, Belgian, and Dutch soldiers were safely evacuated. Written, co-produced, and directed by Christopher Nolan, “Dunkirk” features an ensemble cast including Fionn Whitehead, Tom Glynn-Carney, Jack Lowden, Harry Styles, Aneurin Barnard, James D’Arcy, Barry Keoghan, Kenneth Branagh, Cillian Murphy, Mark Rylance, and Tom Hardy.

Reviewing for the San Francisco Chronicle, Mike LaSalle describes “Dunkirk” as “one of the best war films ever made, distinct in its look, in its approach and in the effect it has on viewers.”