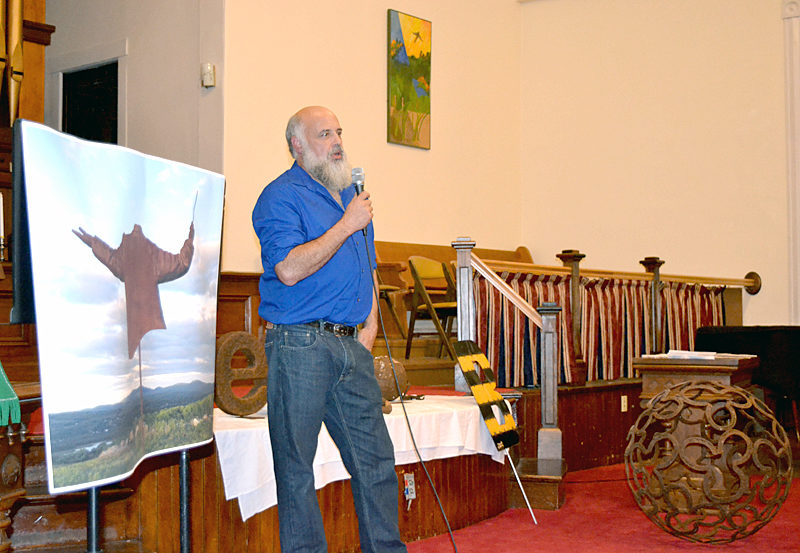 Metal artist Jay Sawyer, a graduate of Medomak Valley High School in Waldoboro, gives a presentation titled “Making New Art from Old Items” as the Waldoborough Historical Society’s final program of the year on Wednesday, Oct. 12 at the Broad Bay Congregational United Church of Christ in Waldoboro. He is surrounded by examples of his work, including a large photograph of his metal sculpture “The Maestro;” a yellow-and-black-striped metal sculpture called “Bumble B”; and a 29-inch sphere made of used horseshoes salvaged from a horse farm in Virginia. (Christine LaPado-Breglia photo)

After a 5:30 p.m. potluck dinner in the vestry of the Broad Bay Congregational United Church of Christ in Waldoboro, potluck attendees filed into the church’s sanctuary for the Waldoborough Historical Society’s final program of the 2016 season on the evening of Wednesday, Oct. 12. The program featured 55-year-old Warren metal artist Jay Sawyer, “one of its own,” as the historical society described him in a press release announcing the event. The burly, bright-eyed, and bearded former Merchant Marine is a graduate of Medomak Valley High School in Waldoboro.

After acknowledging his fourth-grade teacher in the audience, Sawyer launched into an engaging talk about how he went from being a welder to one of Maine’s up-and-coming metal artists. Sawyer’s “Sculpture Soup” exhibit – featuring whimsical metal sculptures inspired by letters of the alphabet – is on display in the Emery Community Arts Center at the University of Maine at Farmington through Thursday, Nov. 3.

Sawyer is fascinated with reusing historic items such as old railroad spikes, horseshoes, and rusty metal salvaged from demolished bridges for the purpose of making art. “I love the texture,” he said, as he held up a chunk of rusted metal from the 1860s. Also, he likes to work with “ordinary objects,” such as the horseshoes salvaged from a farm in Virginia that he used to create a 29-inch sphere he calls “You’re Lookin’ Over a Four-Leaf Clover.” Sawyer’s titles for his sculptures are clever: the 29-inch sphere is made of horseshoes welded into all three-leaf clovers and one four-leaf clover, the one the viewer may be overlooking, hence the name.

Other sculptures have names like “Diamond in the Rough” – a 17-inch sphere of rusted metal into which Sawyer cut out a diamond shape and inserted a piece of shiny stainless steel in the shape of a diamond – and “Evidence of a Struggle,” a hammered metal ball on a chain.

Sawyer’s “Sculpture Soup” series is characterized by his love for wordplay. “Iron e” is a large rusted metal sculpture of a lower-case letter “e.” “An Even Bigger Iron e” is just that: a bigger version of “Iron e.” Then there is “Bloodshot I,” made from an I-beam; “J Walking,” a large, blue metal “J” with legs; “Cheery O,” a lollipop-like “O” on a stick with a happy face; and “Y Knot,” a piece of rebar salvaged from a can company and knotted into a “Y” shape. Sawyer passed “L Bow” – a welded piece featuring a very shiny red metal bow in the shape of a capital letter “L” – around the room for audience members to touch and admire.

Speaking of how he came to be an artist, Sawyer recalled leaving the Merchant Marine, where he passed much of his time welding, after the infamous Exxon Valdez oil spill in March 1989. “A lot of the romance of being a sailor was gone,” Sawyer said. He came back to Maine and went into business as a welder, becoming a welding “go-to guy.”

“I could fix everything,” he said. After a period of time, metal sculptors began calling him to do welding work for them due to his excellent reputation as a welder. When he saw what they were creating and making money at, he said, “Wow – they get away with that?” That realization, and the facts that he had been recognized as a good artist when he was a child and he was becoming burned out on welding due to its lack of creativity, led him to try his hand at metal art.

“I had a desire to be more creative,” Sawyer said. “At about 40 years old, I crossed paths with three people that saw a drive, a passion, a want (in me).” These were people with whom Sawyer began to study the art of metal sculpture, he said – people who encouraged him. One of those people was the late metal artist David McLaughlin, who lived in Liberty. “He took a liking to me,” said Sawyer of the renowned sculptor. “Our skills overlapped.”

After McLaughlin’s death in 2010, Sawyer inherited his collection of 6,000 stainless-steel shear rings, from which he created a sphere to hang inside another, larger sphere that was not made from McLaughlin’s materials. “I had talked to David about how cool it would be to make a sphere within a sphere,” Sawyer said. They had never collaborated on a project while McLaughlin was alive, but this sphere-in-a-sphere amounted to a collaboration of sorts. Sawyer titled the piece “Late Collaboration.”

It has been nearly 10 years since Sawyer had his first art show, in the Knox County town of Cushing, and it seems as though he has arrived in a very comfortable place in his artistic life. “These last 10 years (I’ve been) chasing all this. I’m not chasing it anymore,” Sawyer said of his art career. “I feel like I’m living it.”

“The supper and the program were a terrific conclusion for a most successful year for the Waldoborough Historical Society,” said the society’s president, Jean Lawrence, after Sawyer’s presentation. “Midcoast citizens should be very proud of Jay, a talented artist whose gifts we have nurtured, watched develop, and can now celebrate.”

Learn more about Sawyer, his art, and his Studio JBONE in Warren at studiojbone.com.