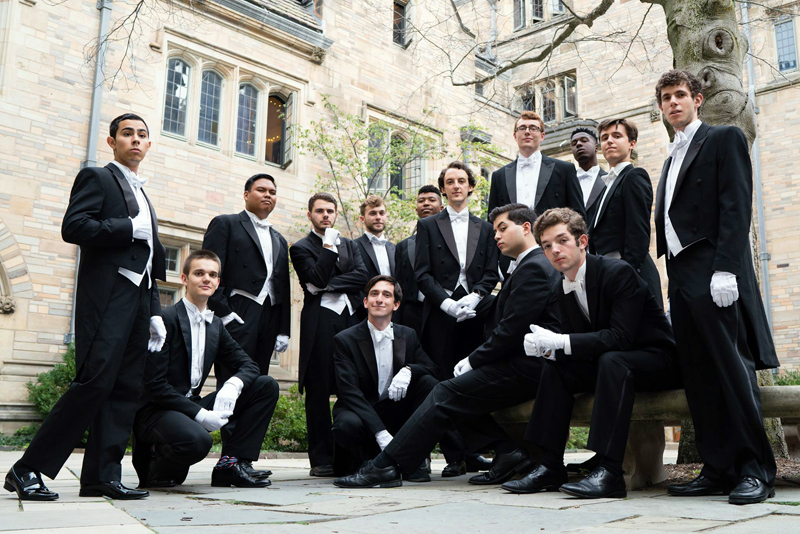 The 2017-2018 Yale Whiffenpoofs, featuring Lincoln Academy graduate Eli Daiute. The Whiffenpoofs will perform at the Second Congregational Church in Newcastle on Sunday, Nov. 12 at 4 p.m.

The Yale Whiffenpoofs, the oldest and most prestigious a cappella group in the U.S., will perform twice in Maine over Veterans Day weekend. The first performance will take place at STAGES Youth Theater in Portland at 7 p.m. on Friday, Nov. 10. The second will take place on Sunday, Nov. 12 at 4 p.m. at the Second Congregational Church in Newcastle. The 2017-2018 Whiffenpoofs group features Eli Daiute, who graduated from Lincoln Academy in Newcastle in 2014.

“The Whiffs,” as they are known on the Yale campus, are an all-male, all-senior a cappella group. During their one-year tenure in the group, the Whiffs visits the hometown of each member for a homecoming concert. The November concerts honor Daiute’s Maine roots and offer the opportunity for his friends and family to see the group perform locally.

Daiute graduated from Lincoln Academy in 2014 and went on to Yale University. At LA, Daiute sang in the Lincoln Academy Lincolnaires and played Tevye in LA’s 2013 production of “Fiddler on the Roof.” At Yale, Daiute spent three years singing with the Alley Cats before joining the Whiffs this fall.

“Not too long ago, I came to Newcastle with the Alley Cats, an undergraduate a cappella group on campus,” said Daiute. “I’ve since ‘graduated’ and am now singing with the Whiffs … the best male singers from each of Yale’s roughly 10 undergraduate groups. Unlike groups like the Cats, the Whiffs take the year off from school to wholly dedicate themselves to singing and bringing their music around the world, un-enrolling from class for a full year during their time in the group. The Whiffs are together nearly 24/7. When we’re not performing, we’re together on tour or busy in rehearsal. With so much time spent together, it’s extremely important that the Whiffs get along — which, luckily, we do!

“I’m incredibly excited to be coming to Newcastle with the Whiffenpoofs,” said Daiute. “Our visit to Maine will bring a welcome breath of hometown air before the group embarks for a tour of the West Coast later in the winter.”