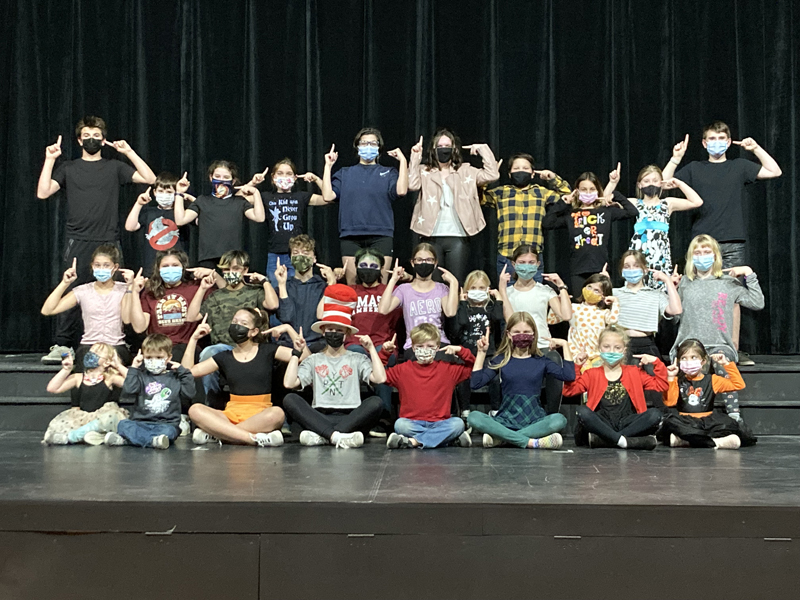 Young performers from the Boothbay and Damariscotta regions with Y-Arts will be putting on a production of “Seussical Jr.” at the Lincoln Theater on Dec. 3-5. (Photo courtesy Emily Mirabile)

This weekend only, the Boothbay Region YMCA’s Y-Arts theater program will be returning to the Lincoln Theater stage with a production of “Seussical Jr.”

“Seussical Jr.,” narrated by The Cat in the Hat, follows the story of Horton the Elephant, who must protect a speck of dust after he learns that it contains the tiny town of Whoville. Meanwhile, Horton must contend with a world that does not believe the Whos exist.

The show will be Y-Arts official return to the Lincoln Theater stage since the beginning of the COVID-19 pandemic.

“We chose ‘Seussical’ as it is not only a fun piece but it also gave opportunities for all of our youth to shine as we returned to the Lincoln Theater. It really is an all-ages musical and we wanted to celebrate all ages of our youth performers with this production,” Mirabile said.

Mirabile is the arts and humanities director at the Boothbay Region YMCA and has directed Y-Arts productions for nearly 17 years. She grew up performing in the Boothbay region and also took theater-based classes while majoring in vocal performance at the University of Southern Maine. She directs the nationally-recognized and award-winning Y-Arts Music Theater Competition Team.

She now resides in Edgecomb with her husband, Nick, and son, Oscar.

Through much of 2020, the YMCA offered a revamped Y-Arts program where most performances were online, but eventually transitioned to in-person rehearsals with frequent wellness checks and masking. During the summer, Y-Arts held five in-person productions in the YMCA gymnasium over the course of a 10-week summer camp. 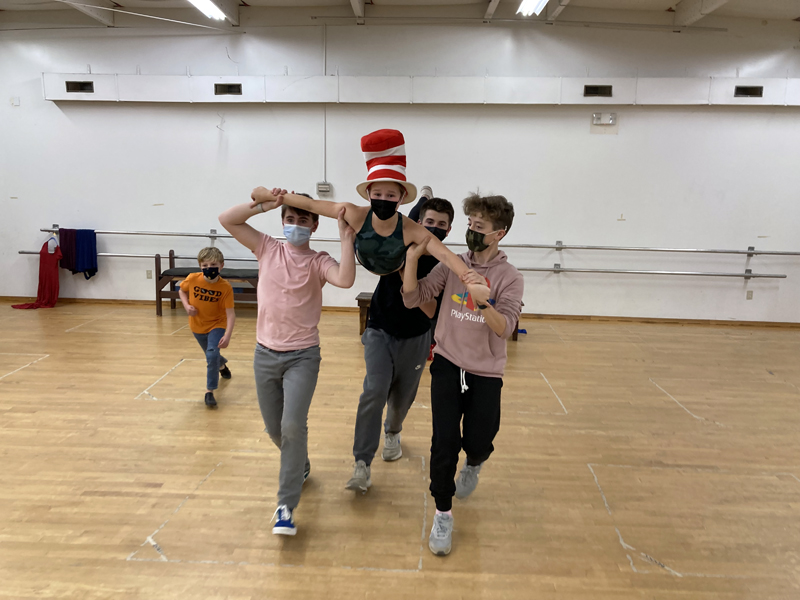 Mirabile said she is proud of the way that her performers remained engaged through the public health demands and disjointed rehearsal schedule for this production.

The cast of “Seussical Jr.” is composed of 32 performers, ages 5-15, from the Boothbay and Damariscotta regions. Mirabile cautioned that some cast members may be required to quarantine following close cases at school and will not be able to perform as a result.

Cast members began rehearsing on Fridays starting in September; after a few disruptions, rehearsals recently resumed Sunday through Wednesday prior to performances.

The youngest performers will be seen on stage as the Whos with older cast members taking on the larger roles in the show. Mirabile said that she did her best to cast her performers in roles that they might not naturally be attracted to as a way to challenge them.

“I felt it was important to not let the kids fall into a certain type of character that they are always expected to portray. With youth it is important for them to explore characters that are out of their comfort zone and in this case, they are truly shining in the roles they play,” she said.

Audiences should look forward to Spencer Pottle’s “sincere performance” of Horton, the Elephant as well as the “sassy vocals” of Abby Amaral as the Sour Kangaroo and the “saucy” portrayal of Mayzie by Jojo Shea, according to Mirabile.

“My favorite thing about this production is that they are finally being rewarded for sticking with it while we came to a place where we could safely have them perform on stage with a live audience. Masks are obviously not ideal for performing but these kids don’t let it take them down,” she said.

Mirabile, who is pregnant with her second child, will be taking a break from Y-Arts the first few months of winter but plans to return for the program’s Lincoln Theater productions in the spring.

The two spring productions Mirabile has planned are “Into the Woods Junior” for ages 10-18 and “Magic Treehouse, Dinosaurs Before Dark” for ages 5-12.

Lincoln Theater will be at full capacity for the performances, and Y-Arts requests that all audience members wear a mask. The youth performers will also be wearing masks during the show.

To purchase tickets for “Seussical Jr.,” go to lincolntheater.net/boxoffice, and for more information about Y-Arts programs, go to boothbayregionymca.org/y-arts.