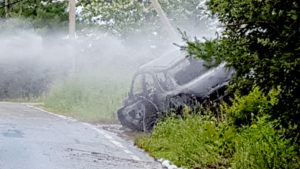 Only a shell remains after a car crashed into a utility pole and caught fire on Ridge Road (Route 215) in Newcastle on Saturday, July 2. Firefighters controlled the fire, but had to wait for a Central Maine Power Co. crew because of numerous live wires downed due to the crash. (Greg Latimer photo)

A Damariscotta woman was transported to the hospital after her car struck a utility pole and caught fire and she was pulled from the burning vehicle in Newcastle the afternoon of Saturday, July 2.

Jane Gear, 66, of Damariscotta, was driving her 2006 Subaru Impreza on Ridge Road (Route 215) when her vehicle left the roadway, struck a Central Maine Power Co. utility pole, and caught fire, according to Lt. Rand Maker, of the Lincoln County Sheriff’s Office.

More details on the accident were not immediately available, Maker said.

Newcastle Fire Chief Clayton Huntley said the front of the vehicle was on fire when firefighters arrived. Passersby had pulled Gear and a passenger out of the vehicle and called 911.

“Compliments to the people who pulled the passengers out of the vehicle, because they saved their lives,” Huntley said.

The fire was a “unique situation” due to the presence of the power line and pole, Huntley said. Once the firefighters were able to put water on the car, it took about 10 minutes to extinguish the fire.

The Central Lincoln County Ambulance Service transported Gear to LincolnHealth’s Miles Campus in Damariscotta, where she was treated and released, according to hospital personnel.