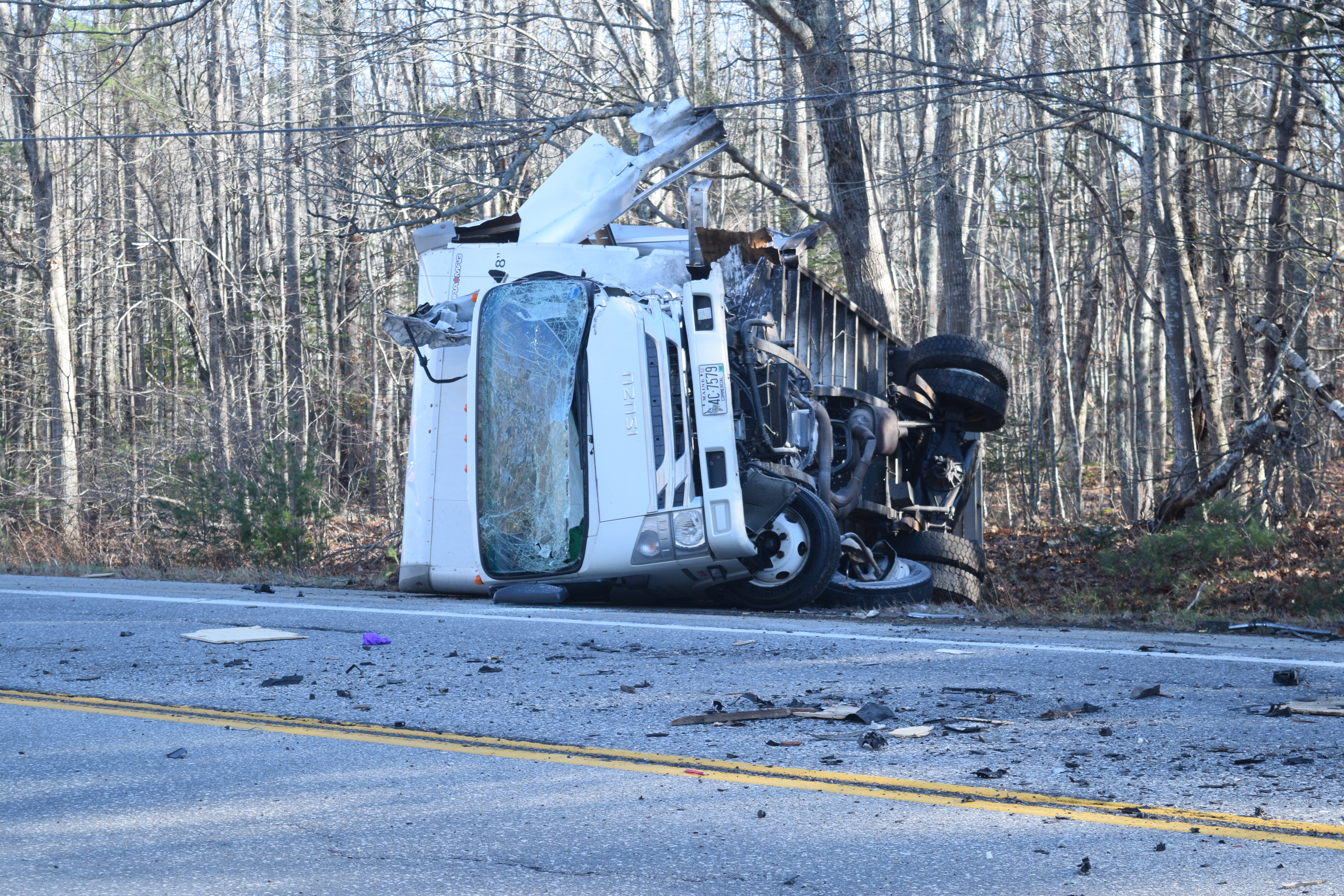 Derick Lavigne, 37, of Buxton, was operating the 2019 Isuzu box truck involved in a two-vehicle crash on Dec. 7. Lavigne was transported to LincolnHealth’s Miles Campus then Maine Medical Center in Portland. (Nate Poole photo)

A 25-year-old died in a two-vehicle head-on collision on Route 1 in Damariscotta around 11 a.m. Tuesday, Dec. 7.

Emilee Mullin, 25, of Belfast, died at the scene from injuries sustained in the crash, according to Sgt. Erick Halpin of the Damariscotta Police Department.

Mullin was driving a 2013 Blue Ford Explorer south on Route 1 between Belvedere Road and the bridge over the Damariscotta River when her vehicle collided with a 2019 Isuzu box truck operated by Derick Lavigne, 37, of Buxton, traveling north on Route 1.

Mullin’s vehicle was also carrying an infant believed to be her child. Halpin said the baby did not appear to be injured at the scene, and was taken to LincolnHealth-Miles Campus Hospital to be assessed.

Lavigne sustained severe injuries. He was initially transported to Miles before being transferred to Maine Medical Center in Portland.

All passengers were wearing seatbelts and airbags in both vehicles deployed.

The Damariscotta Police Department is investigating the crash in collaboration with the Maine State Police Department’s Commercial Vehicle Unit, as well as reconstruction specialists from the state police department and Sagadahoc County Sheriff’s Office.

Halpin is leading the investigation. He said that speed and impairment are not believed to be factors in the crash. No charges have been filed.

The Damariscotta Police Department, Damariscotta and Newcastle fire departments, and Central Lincoln County Ambulance Service arrived on scene around 11:15 a.m. The Maine Department of Transportation also reported to the scene to assist with clean-up of debris.

Route 1 was blocked from approximately 11:15 a.m. until 5 p.m. The southbound lane was opened to one-way traffic around 3 p.m.

Damariscotta Fire Chief John Roberts said that it was unusual to have Route 1 shut down for such an extended period.

Responders could not route traffic through Route 1 for so long due to excessive debris and the severity of the damage to the vehicles, according to Roberts.

“Nothing about this was an ordinary accident,” he said.

The Lincoln County Communications Office paged first responders at 11:14 a.m. and the scene was cleared around 5 p.m.