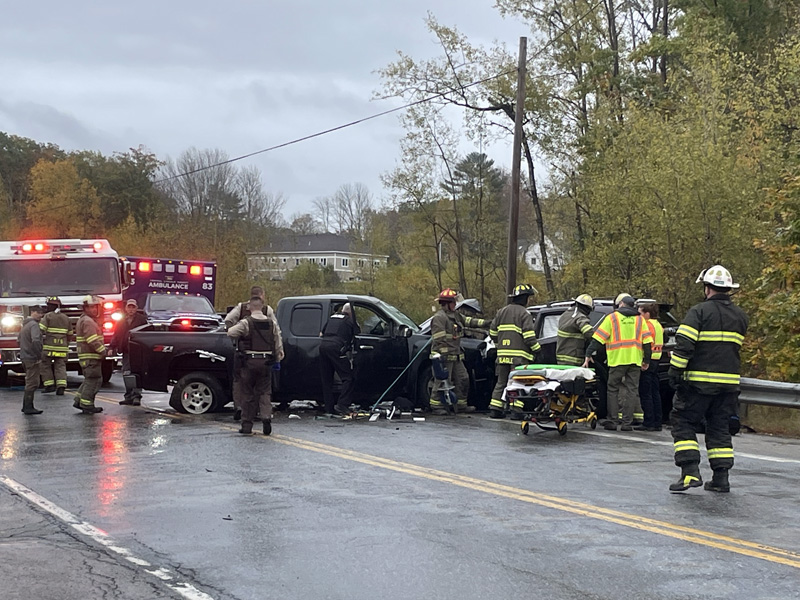 A two-car head-on collision on Route 1 in Damariscotta closed the highway for several hours Friday, Oct. 14 and sent the operators of both vehicles to the hospital.

According to Damariscotta Police Chief Jason Warlick, the crash occurred around 2:41 p.m. when Gregory S. Prior, 51, of Thomaston, operating a southbound 2009 Chevrolet 1500 pickup truck, crossed the centerline and struck a northbound 2017 Toyota RAV-4, operated by Victoria I. Ceglinski, 23, of Wiscasset.

Both drivers had to be extricated from their vehicles and were transported to Maine Medical Center in Portland where they remain at press time. As of Wednesday morning, Oct. 17, Prior was reported in fair condition and Ceglinski was listed in satisfactory condition, according to Clay Holtzman, Maine Medical Center vice president of communications and public affairs.

Damariscotta Police Officer Phil Tessier witnessed the collision as he was attempting to pull Prior over near Belvedere Road, Warlick said.

The Damariscotta Police Department received reports Prior was involved in two other, separate motor vehicle crashes while traveling south on Route 1 on Friday afternoon, Warlick said. Impairment from drugs or alcohol on the part of Prior appears to be a factor in the crash, Warlick said.

Warlick said the rapid response by Damariscotta and Newcastle fire departments and Central Lincoln County Ambulance Service may have saved lives in this case. Firefighters quickly extricated the drivers from their vehicles and Central Lincoln County Ambulance Service quickly stabilized them for transport to the hospital, Warlick said.

“I believe the quick response and quality care by CLC Ambulance and the fast extraction by the Damariscotta and Newcastle fire departments helped limit the loss of life,” Warlick said. “Everyone did a fantastic job dealing with a horrific incident.”

The scene was clear and the road reopened around 6 p.m., Warlick said.

Riley Faulkingham, 18, of Boothbay, said his 2007 Toyota Corolla was one of the cars Prior struck before the Damariscotta crash. Faulkingham said he encountered Prior’s black Ford in Warren just after Faulkingham turned onto Route 1 from Route 90. Faulkingham was on his way home from Washington County Community College, where he attends classes during the week.

“As soon as I turned onto Route 1, this truck was behind me,” Faulkingham said. “I noticed he had a broken grill, which to me don’t mean much, because around here he might have hit a deer.”

In his rearview mirror, Faulkingham was able to tell Prior was swerving a little. He was leery enough to leave extra space between himself and the vehicle in front of him as he stopped at the traffic light by Moody’s Diner. Faulkingham watched with growing concern as Prior came up behind him quickly, striking the rear of Faulkingham’s vehicle.

Faulkingham estimates Prior was doing 20-25 miles per hour at the time of impact.

“He got out of his truck and came up to me,” Faulkingham said. “He was apologizing. He was kind of like, tweaking. It didn’t seem like he was all there. I was trying to tell him I was going to pull over up ahead and he just got in his truck and took off.”

Faulkingham followed, calling 911 and reporting his collision and the erratic driving. Following at a safe distance, he stayed on the line with Lincoln County Communications Center while shadowing Prior’s truck from Waldoboro to Damariscotta. While driving, Faulkingham said he could see Prior waving his arms as though he were dancing, or having an animated conversation.

“He was swerving in and out of lanes, slamming on the brakes, speeding up,” Faulkingham said. “Around Duck Puddle (Road, Nobleboro) he sideswipes an oncoming silver car. He took off the mirror … I don’t know how many times he almost wrecked. We got to Midcoast Energy: he went up over one of those curbing dividers. He totaled one of the signs there. He just took it right out. Just after we got by N.C. Hunt, the woman asked me if I saw the sheriff. I saw the lights way behind me.”

According to Faulkingham, just before the crash, Prior left the roadway on the northbound side of Route 1 to avoid an oncoming vehicle. “He went into the oncoming lane,” Faulkingham said. “He almost hit another truck. He went down in a ditch and he came up, out of the ditch and hit head on. As soon as it happened, I told the 911 operator to call an ambulance. She told me to pull over and I did.”

In a post on her personal Facebook page Sunday, Oct. 16, Victoria Ceglinski confirmed she sustained significant injuries to both legs, including breaking her left femur in 10 places as well as her right tibia, fibula, patella, and multiple bones in the ankle and foot.

“All this being said, I’m deeply grateful to be alive and not paralyzed. It’ll be a long recovery, but I am still here,” Ceglinski said in her post.