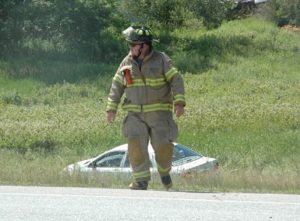 A Nobleboro firefighter works at the scene of a three-vehicle accident on Route 1 the afternoon of Monday, July 11. One of the three vehicles is in the ditch behind him. (Alexander Violo photo)

No injuries were reported following a three-vehicle accident on Route 1 in Nobleboro the afternoon of Monday, July 11.

The accident occurred near the entrance to the boat ramp and baseball field in Nobleboro and slowed traffic in both directions as ambulance personnel, firefighters, first responders, and sheriff’s deputies worked at the scene.

According to Lincoln County Sheriff’s Deputy Chad Gilbert, the accident occurred when a small Honda SUV driven by Edgar Oestreich, 83, of Damariscotta, attempted to turn left onto Route 1 from the driveway to the boat ramp.

Gilbert said Oestreich’s vehicle clipped the side of a Volkswagen sedan traveling north and operated by Daniel Kates, 51, of Randolph, causing the car to spin out.

A third vehicle, a Toyota sedan driven by Samuel Hewson, 25, of Waldoboro, did not collide with the others, but Gilbert said Hewson, who was driving south, swerved to avoid the crash and ended up in the southbound ditch. The Toyota was able to leave the scene under its own power.

The Honda and the Volkswagen required assistance from Hillside Collision Center, of Waldoboro.