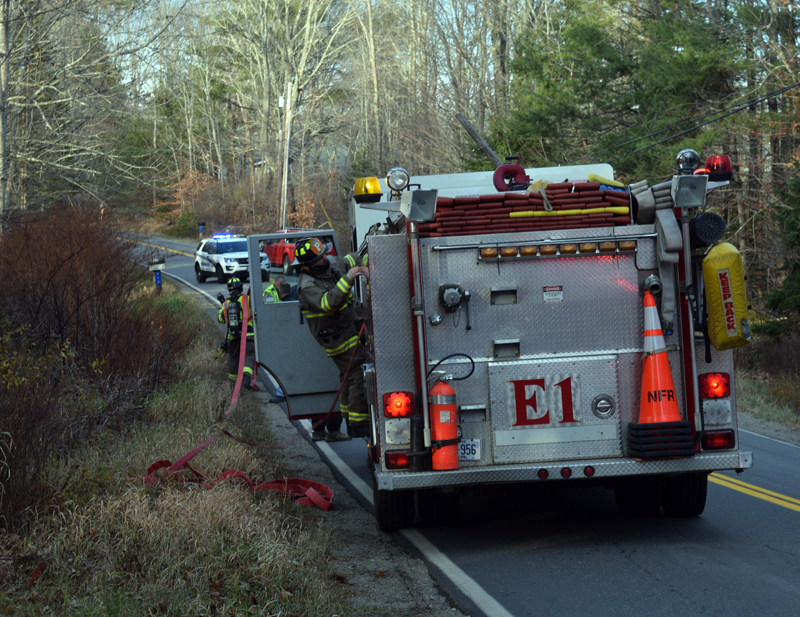 Nobleboro firefighters work the scene of a head-on collision on East Pond Road in Nobleboro the afternoon of Tuesday, Nov. 15. The crash closed a portion of East Pond Road. (Evan Houk photo)

A 68-year-old woman was fatally injured in head-on collision between two vehicles on East Pond Road in Nobleboro the afternoon of Tuesday, Nov. 15.

According to a press release from the Lincoln County Sheriff’s Office, the collision took place half a mile north of East Pond Road’s intersection with Upper East Pond Road near the Jefferson town line. The collision was reported at 2:33 p.m.

Sharon Moody, 68, of Nobleboro, was traveling south in her 2009 Honda Accord and crossed into the path of an oncoming northbound Western Star dump truck owned by McGee On the Road Equipment, of West Gardiner, and operated by Steven Levensailor, 56, of Augusta, according to the press release. The dump truck was not loaded at the time of the crash.

The vehicles collided in the northbound lane. Levensailor left the road to avoid Moody’s vehicle and struck a utility pole, damaging it.

Moody died at the scene from her injuries, according to the press release. Levensailor was taken to LincolnHealth’s Miles Campus in Damariscotta with non-life-threatening injuries.

The cause of the collision is under investigation, according to the press release. Speed and alcohol are not believed to be factors.

A utility pole was down at the scene, according to the press release. Central Maine Power Co. crews responded to repair it and restore power. East Pond Road was closed until 8 p.m. on Nov. 15.

Questions about the accident can be directed Lt. Brendan Kane at the Lincoln County Sheriff’s Office by calling 882-7332 or emailing bkane@lincolnso.me.