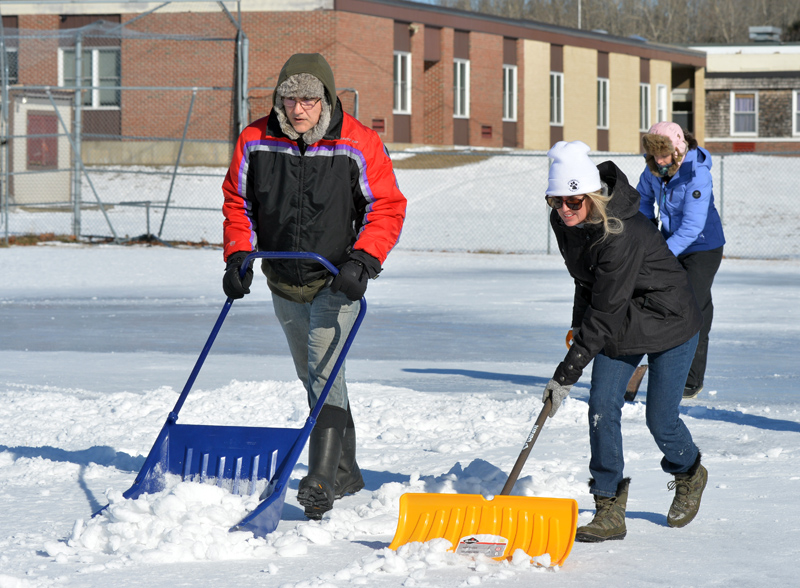 A student letter to the Whitefield Board of Selectmen led to a grassroots effort to build a community ice rink. Board member Lise Hanners said students asked “if there was a way kids could skate locally.”

Hanners said the school was contacted and they were interested, so a community meeting was organized. An article was put into the town’s newsletter, requesting donations.

“A lot of people skate on small ponds that are privately owned. We wondered if there was enough demand, but people were really excited” about building a rink,” Hanners said. “We had full funding within a week, which was great.”

A work day was scheduled for Saturday, Jan. 22, but when it was discovered the land was not flat enough to put a rink on, volunteers looked at the baseball field, which was covered in ice and snow.

“We switched plans, and decided to shovel off the snow,” Haskell Padgett said of preparing the ball field for skating.

Several volunteers were busy shoveling in single-digit temperatures on Saturday to prepare the field for skating.

Haskell said the fire department would be flooding the field Saturday afternoon and it was hoped it would be ready for skating on Sunday.

All the materials for the rink have already been purchased. Next fall, the plan is to level an area, and build the ice rink for use next winter.

The rink design uses PVC pipe. A re-usable plastic liner will be placed inside the PVC pipe border, on top of the frozen ground, and then filled with water. It will not be necessary to put up wooden railings.

The rink will be built on town-owned property in the vicinity of the Whitefield recycling center and the school ball fields.

“The school is excited. The gym teacher is hoping to bring kids out to skate,” Hanners said.

The school is currently looking for donations of skates for students and community members to borrow. Skate donations may be dropped off at the Whitefield Town office or at the school.

The skating area is open to anyone.