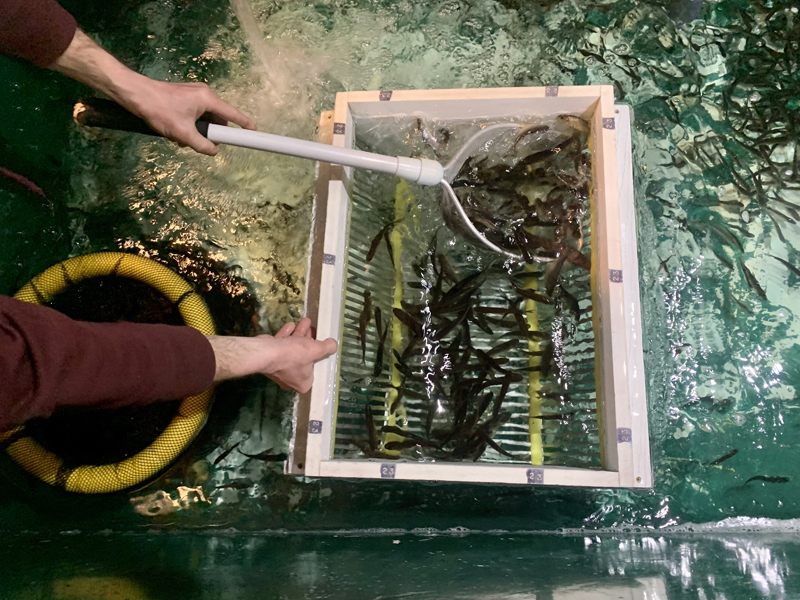 Steve Wood grades fish in the large tanks behind his shop, using the same device he uses when ice fishing to make sure he doesn’t take any fish that are too small. (Anna M. Drzewiecki photo)

“It’s self serve, it’s the honor system,” said owner Steve Wood from behind the door to the Bait Bucket’s back room, warm lights overhead cutting through the grayness outside.

In the front room, open to customers, hand-painted signs mark tanks of smelt against one wall, shiners on the other. The shiners are divided by size from small to jumbo. The fish swirl around in eddies of green, black, silver slippery radiance. A seine net and some other fishing supplies adorn the walls. A small fridge in the corner. The shop is crisp, not much warmer than outside.

“I try to keep it cold in here. The ticket is to keep it cold. Then your fish don’t get shocked,” said Wood. Other bait shops don’t keep it this cold, he said, which limits the fishes’ survivability.

Wood, from Boothbay Harbor, would know. “I’ve been a fisherman my whole life,” he said. Commercial fishing, offshore, mostly herring and ground fish. He has been selling bait for five years – four at the Bait Bucket at its Route 27 location.

Though he runs the shop solo, he has friends who help catch the fish, a driver to help distribute to wholesale locations. Wood also stocks a self-service utility trailer in Naples, off Sebago Lake, with bait. He wants to open one more like it, maybe in Union to catch Alfred Lake fishermen. Not yet though. This is been a long hard winter. Sales are down at least 40% – wholesale sales down tenfold – and the ice is already starting to melt.

“It’s been a long winter,” said Wood, opening the bottom half of the Dutch door and walking towards the back of the shop, where he keeps more tanks. He can keep bait fish alive for three months, he said, if he catches them in the fall and keeps the water temperatures low.

There’s a slow period for business, when the ice starts to melt. The past few rainstorms hastened the process, slipping too quickly into spring. “It’s coming right up, pretty much getting started,” said Wood. “The weather has been weird.”

Weekends in January were too cold, or too windy, plus there were a few storms that fell on Fridays, lasting into the weekend. “You’ve got to get weekends,” he said.

But Wood is confident in the bait he sells – and in his business model.

“I’m the only one that really does both, smelting and shiners,” said Wood. And anyone fishing salmon, he said, relies on smelt. But it’s not easy: Smelt fishing is a nighttime endeavor. Wood doesn’t get much sleep. In fact, he gets less sleep than he did when fishing offshore.

“I travel all over the state, just got back from Aroostook County, chasing smelt,” he said. He listed off names of towns he’d been through, all at least a half a day’s drive away.

“I think I’ve been on every road ten times,” said Wood. “I go everywhere”

He’s not the only one who travels, chasing smelt.

“Because I carry smelt, I get people from Camden, Rockport – people drive an hour to get my smelts. From Phippsburg, Georgetown, Union,” said Wood, trailing off.

But smelts have been harder to come by this year, which Wood attributes to overfishing.

“There’s a list of lakes we can fish and it’s been the same list forever. They’re just overfished,” he said, adding that he wished there was more management from the State, including more rotation of fishing grounds.

“They’ve got to open up some new lakes for us,” said Wood. “It’s hurting everybody.”

He faces other issues with shiners. According to Wood, people often take the fish without discretion, hauling up the smallest ones along with larger, older ones. Then, at least some of those fishermen, dump them in private ponds to grow. He worries about the impact of this kind of fishing on the bait fish’s populations.

“They’re better off in their own ecosystem,” said Wood, who uses a device to grade for size on the scene, right after hauling his self-made stainless-steel traps, labeled with his name and address. He leaves the smallest ones where he found them. He lets them go.

Back in the front shop, oxygen bubbles into the water in low blue tanks.

The pay box is locked, nailed to the wall, a small slit for cash on top.

“Some people might take a few extra fish,” said Wood. Still, he’d rather be self-service and not have to hire extra labor. Plus, it means he can be open all the time. And he has gotten to know a lot of his customers.

“I like it,” said Wood, despite the sleepless nights, this year’s drop in sales, the erratic weather, the ceaseless driving.

Come summer, the Bait Bucket will be open for saltwater bait, blood worms, some rods and reels, a little bit of tackle. The warm season is a little less demanding, not chasing smelt around in the dark. But these days, Wood still gives it everything. He has to. Waiting for a phone call from a friend – they were going to pull shiner traps, his smelt traps already hauled up – Wood busied himself replenishing the front tanks with fish from out back. “In the winter, it’s full time,” he said.