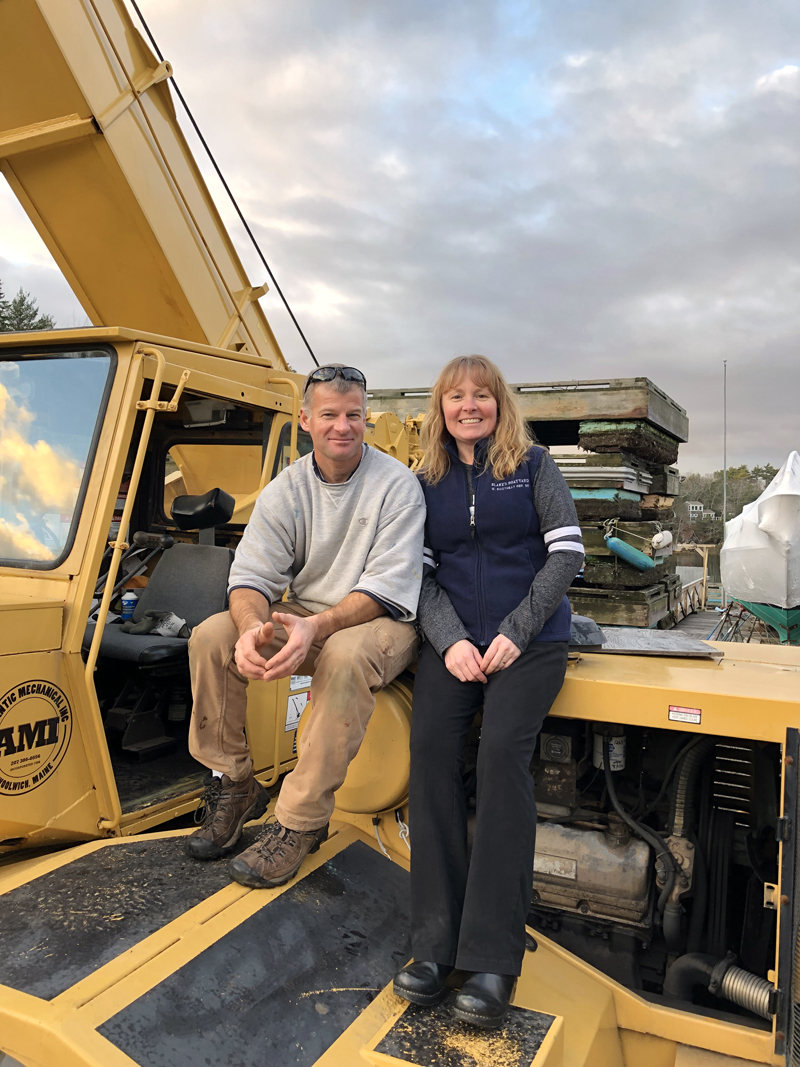 Sixty-seven years after Fred Blake established Blake’s Boatyard in 1951, his granddaughter and grandson-in-law have become the third generation to own and run the family business in West Boothbay Harbor.

Amy Blake Goodwin and Dusty Goodwin are the new owners of Blake’s as of Sept. 1. Her father, Gary Blake, and his brothers, Neil and Joe Blake, have helped run the business since the early 1970s and had owned the business for 10 years.

Amy Blake was a junior at the University of Southern Maine in the early 1990s when her grandmother, Ginny Blake, had to stop working. She came back to West Boothbay Harbor to take over the office duties and commuted to Portland to finish college. She has been working at her family’s boatyard ever since.

Dusty, who used to fish offshore, has been working at the boatyard full time, seven days a week from spring through fall, for 15 years.

“He and my grandfather are a lot alike – very professional and like everything to be done right,” Amy said. “They became kindred spirits.”

In 1961, Fred Blake bought Pier 1 in Boothbay Harbor from Gulf Oil and started Marine Services on the wharf in front of McSeagull’s, where he sold gas and Boston Whalers, also available for rent. He opened a marine supplies store, Blake’s Marine, in the space that has been occupied by a T-shirt shop for 38 years and will open as Windjammer Emporium this spring.

In 1973, Fred consolidated both businesses under the name Blake’s Boatyard at 118 McKown Point Road in West Boothbay Harbor.

When Fred died in 2008, the business was passed down to his sons, Gary, Joe, and Neil.

The Blake family sold the Pier 1 property to Lafayette Hotels on Dec. 3.

Today, Blake’s Boatyard stores and services around 600 moorings, 300 boats, and over 100 floats. It services some boats that are not stored at the yard, as time allows.

“For the most part, we try to focus on our storage customers,” Amy said. “We try to be faithful to them and they appreciate it.

“We still have customers from my grandfather’s time. Some third-generation family members still have the same slip and most of them are like family to us.”

Most of the non-Blake employees at the boatyard are considered family too, after many years of working there. Amy joked about the ages of her uncles and the other men around the same age, in their late 60s. “We call them the Medicare group,” she said.

Longtime employee Roland Sherman, who has been with the Blakes since the early 1970s, is an expert at varnish work. Pete Johnson, who services moorings, started in 1975. Sean Gray has been working at the yard since he graduated from high school in 1990, and Dave Jewitt and Norwegian Birger Mindy have been there since the mid-1980s. Part-timer Matthew Rice helps out during winters when he’s not fishing. Garreth Burnham specializes in annual boat-bottom painting and Aaron Dickinson works at the yard during the summer when not attending school.

The Blake family is as close-knit outside work as it is on the job.

“Fred loved having the family all together,” Amy said. “When my grandparents were alive, not only did we work together, but we all had dinner together once a week or so, and we still get together often.”

Spending so much time with a spouse can be a challenge, but Dusty and Amy appear to have the fortitude, and sense of humor, to make it work. “I boss him around and he bosses everybody else around,” Amy joked.

“I try to guide them in a manner that makes them more efficient,” Dusty said.

“It works because ‘the three boys’ are very laid-back and easygoing,” Amy said of her uncles, who continue to work at the boatyard. “And Dusty is a perfectionist. There have been a few moments when he tried to introduce something new, and there’s been a little bit of pushback, but then they’d see that it made sense and made things work a little better.”

An outsider might think a boatyard in Maine would allow for long vacations during the winter, but Amy said that’s not the case at Blake’s. Around 10 employees work at the boatyard throughout the winter, building and repairing docks and floats.

Though Amy and Dusty are now the official bosses, Amy said that’s really just a technicality. “We all still kind of run everything together. Nothing has changed from day to day,” she said.

“Except that now when I come to work I get paid,” Neil joked.

“We’re really lucky,” Amy said. “We have a great crew and a great family, and everybody still gets along very well.”

“We communicate with each other and we know what’s got to be done, when it’s got to be done,” Dusty said. “Sometimes it’s chaotic and crazy, but it works out. The only problem is that there’s not enough hours in a day.”