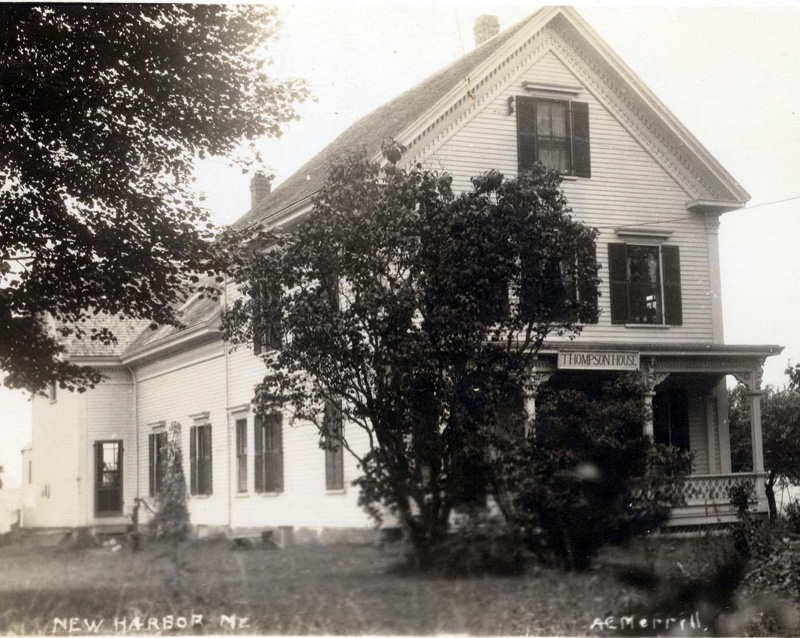 A 1920 photo of the Thompson House in New Harbor. (Photo courtesy Katherine Thompson)

The new year will bring a new generation of ownership to Thompson House and Cottages in New Harbor, as Katherine Thompson and Charlie Hudson become the owners and managers of the business.

In 1920, Jessie (Plenniman) Thompson became the first of the family to rent rooms in the Thompson House. The house had been a private residence originally built by sea captain Alexander Thompson in 1874. According to Katherine Thompson, it was not uncommon for homes in the early 20th century to take in visitors brought to the area by steamers from Boston or New York.

“She was feeding the whole town anyway, might as well make a business of it,” is a quote the Thompson family often attributes to Katherine Thompson’s great grandfather Guy Haley Thompson. Jessie Thompson ran the inn for just under 30 years.

Dan and Edie Thompson were the second generation owners. Under their 50-year stewardship, the inn flourished and the restaurant’s capacity increased by more than 60 diners.

Katherine Thompson said her grandfather was a “real entrepreneur,” taking out loans to buy more land. He built the 21 cottages, one every other year, most with ocean views. The family sold three of the cottages during the pandemic.

“It was a real blessing to have that land as an asset,” said Katherine Thompson.

Katherine Thompson’s parents, Merle and Karen Thompson, are the third-generation owners. They focused on the infrastructure of the property by adding a metal roof to the house and the boathouse, updating the furnishings, and adding solar panels to several of the cottages.

They also began booking reservations on a computer. Katherine Thompson recounted a family story about her grandfather, who used “a big piece of plywood covered with a clear shower curtain with mailing labels stuck on” as his reservation system. When he handed the board to his son, several labels blew off, prompting Merle Thompson to decide it was time to bring in a computer.

After taking over the family business, Katherine Thompson and Hudson plan to switch to a cloud-based booking system, begin an association with Airbnb, start a blog promoting local activities for visitors, and create robust social media presence featuring a mix of turn-of-the-century photos of New Harbor with contemporary photographs of the family, the grounds, and the surrounding scenery.

They are also considering renting the cottages for group workshops on topics such as homesteading that match the couple’s personal interests. They hope to be able to weave their lifestyle into the business as much as possible.

With the COVID-19 pandemic, Katherine Thompson said it was a hard year for her parents to end on. She is glad her parents came up with a COVID-19 policy that “really worked” and said that the inn will continue to follow it for the foreseeable future. She said they have a strong occupancy map for the next year so they are “cautiously optimistic.”

Katherine Thompson said that she has planned on running the inn “all her life.” She believes that the natural beauty of the place – both New Harbor and the property are part of what makes the Thompson House so special. She thinks that the family legacy, the tradition behind the business, “the very human component to what every generation has done” are also factors in the location’s beauty.

“It’s one of the few paces you can get away from the busy world, she said. “People come to watch the waves. And the lobster boats.”

Hudson said that New Harbor is a “small, walkable community that seems like it comes from another era.” The inn has “such a community of people who have come every year for decades,” He admires the guests’ history with the property and the traditions they have built around it.

Hudson and Katherine Thompson recently welcomed a new addition to their family, their son Theo was born in the spring of this year, a possible fifth generation.

For more information about Thompson House and Cottages, call 677-2317 or go to thompsoncottages.net.