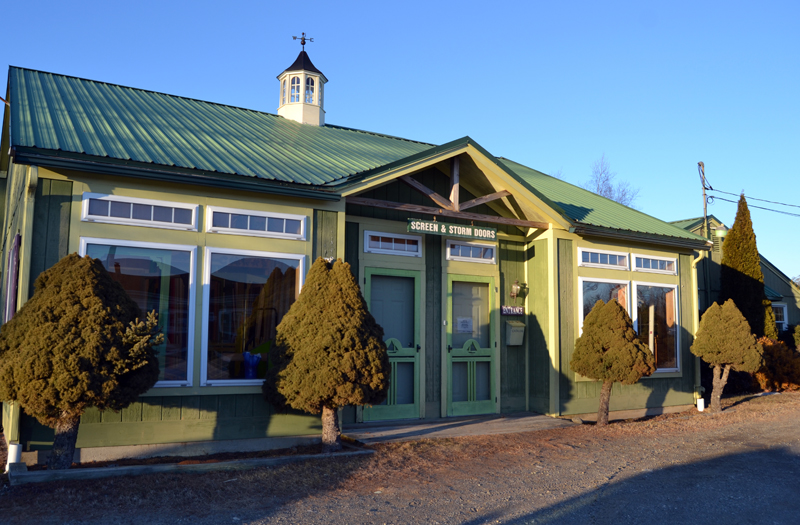 For the first time since the business’s inception, Wooden Screen Door Co. in Waldoboro is under new ownership.

Neil and Jennifer Gutekunst purchased the business and building at 3542 Atlantic Highway on Nov. 4 from John Otterbein, who opened Wooden Screen Door Co. at the location in 1994.

“When we walked into the door and met John … that was when we knew this was going to be OK,” Jennifer Gutekunst said. “He was wonderful to work with, and throughout the whole process he was super communicative and transparent. We knew exactly what we were getting into.”

Wooden Screen Door Co. has been creating custom mahogany doors and porch panels for close to three decades. Otterbein was looking to retire and sell the business around the time the Gutekunsts were looking to purchase a second business in Maine. The couple also own New England Treads in Gorham, the largest manufacturer of stair treads in the state, which they purchased in May 2019.

Their business backgrounds go back further, however. Jennifer Gutekunst’s parents have owned a retail store outside of Philadelphia for 25 years, while Neil Gutekunst owned laundromats with his family.

“Between the two of us, we have a good enough brain to run the business, and if we needed help we have a really deep pool of knowledge to pull from with our parents,” Jennifer Gutekunst said.

In their approach to ownership of both businesses, the Gutekunsts described themselves as holistic managers who lead by example.

“It’s extreme ownership,” Jennifer Gutekunst said. “When things go wrong, it’s our fault. Either an employee didn’t have the information they needed or we didn’t communicate something correctly.”

“The buck stops with us,” Neil Gutekunst said. “Everything in the shop comes down to us.”

When the couple purchased New England Treads, Neil Gutekunst spent time on the manufacturing floor learning the ebb and flow of the production. He was then able to train new employees and hire himself off the floor and into the office. He’s spending more time in the office at Wooden Screen Door Co. with plans to eventually be trained by one of the three craftspeople on the production floor.

There are similarities between the two businesses. New England Treads and Wooden Screen Door Co. share vendors and customers, and Gorham Savings Bank was instrumental in the purchase of both businesses, Jennifer Gutekunst said.

“It really just made the whole process easier,” she said.

The new owners threw themselves into learning the Wooden Screen Door Co.’s roster of designs, even creating a deck of flashcards. However, as the doors are all custom made, clients can mix and match elements of designs, Neil Gutekunst said.

“It’s so much fun,” Jennifer Gutekunst said. “There’s a story behind every door.”

Both Neil and Jennifer Gutekunst were quick to praise Otterbein for his guidance of the business over its three decades.

“John built a great business and designed beautiful doors,” Neil Gutekunst said. “There are a couple other screen door manufacturers out there, but his designs really stand out above the rest.”

“And he did such a great job with customer service!” Jennifer Gutekunst added. “There are so many repeat customers because of the relationships he cultivated.”

Since purchasing Wooden Screen Door Co., the Gutekunsts have made minor changes behind the scenes, such as reorienting the store’s QuickBooks software and simplifying the ordering process. They hope to create a new website for the business in the future.

One thing, however, will forever remain constant.

“The doors will stay the same,” Neil Gutekunst said. “John designed a beautiful product, and we’re not going to change that.”

Wooden Screen Door Co. is open from 9 a.m. to 4 p.m., Monday through Friday. In the spring and summer, the business will be open on Saturdays for limited hours.