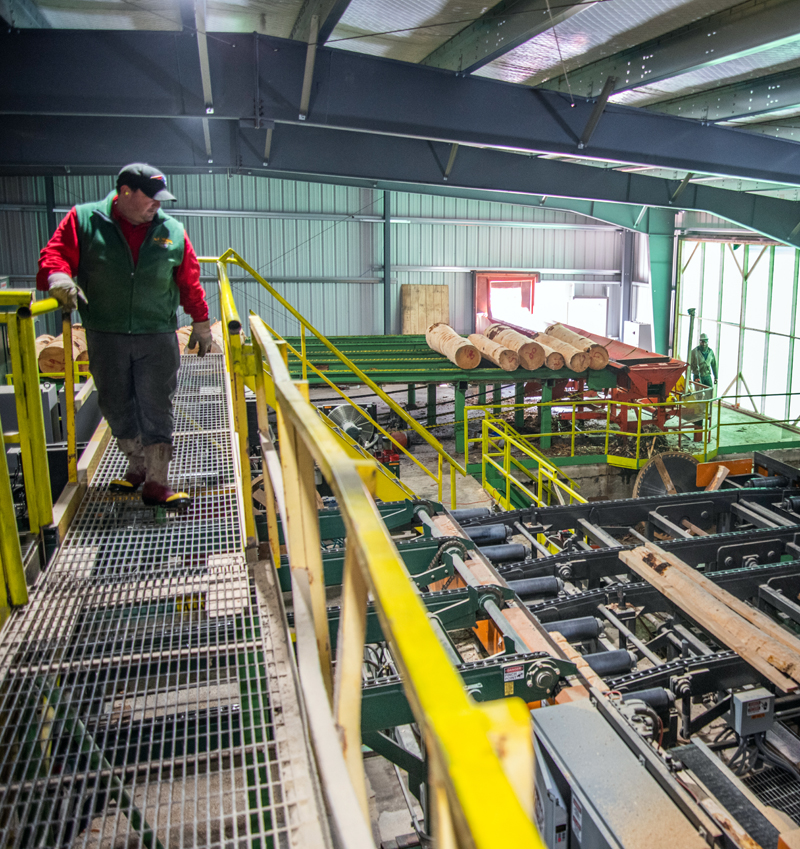 N.C. Hunt Lumber President Rob Hunt surveys the mill floor from a catwalk March 24. Hunt says he is the fourth or fifth generation of his family to work in the timber industry. “This family has always been cutting timber, chasing cows, and playing in dirt,” he said with a laugh. (Bisi Cameron Yee photo)

About a year after a fire destroyed the N.C. Hunt Lumber sawmill in Jefferson, a brand-new mill is up and running, employing locals and producing lumber.

According to Rob Hunt, president and co-owner of N.C. Hunt Lumber, the new sawmill officially started day-to-day operations during the second week of February.

“We started slowly and got it up and running more and more,” Hunt said.

The business is “trying to keep it up to about three-quarters capacity” with the goal to be at full capacity sometime this summer, according to Hunt.

“It has been a learning process. The crew has been getting used to it, getting the bugs out and becoming familiar with the new equipment,” Hunt said.

The new equipment at the mill includes a sawmill carriage from Cleereman Industries Inc., of Wisconsin, and a Corley combination gang/edger, a device used with saws to straighten and smooth lumber.

Hunt said the state-of-the-art carriage allows the business to saw lumber up to 24 feet long and 8 feet wide.

The new machinery allows the mill to be flexible and make specialty products, according to Hunt.

“I just love the new equipment. It switches from one product to another very quickly and very accurately. It’s been great for doing custom orders, and large and big timbers. We can make great-quality products. I’m really excited about it,” Hunt said.

Hunt said that amid the uncertain economic climate brought on by the coronavirus pandemic, the new mill enables the company to stay competitive.

Hunt said a portion of the new building is on top of the old sawmill’s foundation. The new structure is a little smaller than the one lost in last year’s blaze.

“The new space takes up about three-quarters of the footprint of the old mill. The building itself is a little smaller,” Hunt said.

In addition to the 11,900-square-foot main building, there is another new building used for packaging and storage of lumber.

The fire, which started late March 29, 2019, destroyed the old sawmill and caused significant damage to the rest of the work site at 200 South Clary Road.

“We started rebuilding in April, a few days after the fire. The Tuesday after we were in construction mode, had a crew cleaning up debris and starting to build,” Hunt said.

“Right now, we are taking all the employees who were building the mill and having them run it,” Hunt said. “As we expand capacity, we will be looking to hire some more.

“A lot of our workers never left. After the fire they went into construction mode and helped to build the new mill.”

“It took us two to three months longer than I thought to get it up and running, but right now we are making some great products, producing some really great custom timbers,” Hunt said.

Hunt said the initial plan was to complete the building around the new sawmill, after production started, but the decision was made to finish the building before starting production.

According to Hunt, the winter months were spent doing electrical work and installing safety guards at the new mill, with other projects involving earthwork, grading, and drainage.

Hunt said a large amount of iron was used over the course of the reconstruction.

“We tallied it up and about 42 tractor-trailers of iron were used to build the mill, whether it was the new machinery or the I-beams,” Hunt said.

Hunt credited the local community for giving the business the support it needed to rebuild successfully.

N.C. Hunt’s rebuilding efforts were assisted by a Community Development Block Grant, which partially funded the new sawmill, electric components, and related equipment. The grant required a 1-to-1 match from the business.

Jefferson voters agreed to accept the $350,000 grant during a special town meeting in May 2019. The program requires the funds to go through the town.

The business received a $200,000 grant from the same program in 2017, using the funds for the addition of a dry kiln in Jefferson.

In addition to its mill, N.C. Hunt operates retail stores in Damariscotta and Jefferson.

Before the fire, the mill employed 30 people. Seventeen were laid off as a result of the fire. The sawmill currently has 17 employees and plans to add more as it ramps up production, according to Hunt.