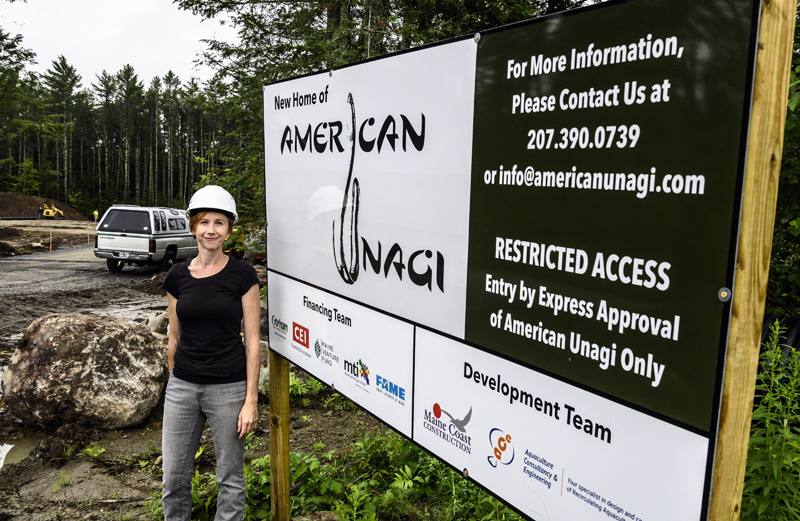 Sara Rademaker, founder and president of American Unagi, stands in front of a sign at the construction site for her 27,000 square foot facility in Waldoboro on July 19. Rademaker said this moment represents the dream she has had for seven years of building an aquaculture business in Maine. (Bisi Cameron Yee photo)

On July 19, Sara Rademaker, founder and president of American Unagi, a company that grows and sells locally sourced, responsibly raised eels for the U.S. market, met with her construction team on the site of the long-planned state-of-the-art eel aquaculture facility that has finally broken ground in Waldoboro.

“I was telling the guys when they were pouring the concrete that I’ve been thinking about this moment for seven years,” Rademaker said. “It’s exciting being able to finally see a vision that I had for an aquaculture facility here happening.”

Days later, Rademaker formally announced the ground breaking on July 28, the timing giving added weight to the significance of her achievement. July 28 is also Unagi Day, or Eel Day in Japan, an annual midsummer observance during which eel is eaten to counteract the heat of the summer season.

In 2014 Rademaker cultivated a small quantity of baby eels, or elvers, in the basement of her Thomaston home. They grew to size and within a year she moved to a pilot facility in Franklin where she tested her vision of a viable commercial eel-based aquaculture. But the $10 million, 27,000-square-foot Waldoboro facility located at the Waldoboro Business Park is the culmination of plans that date back even further. 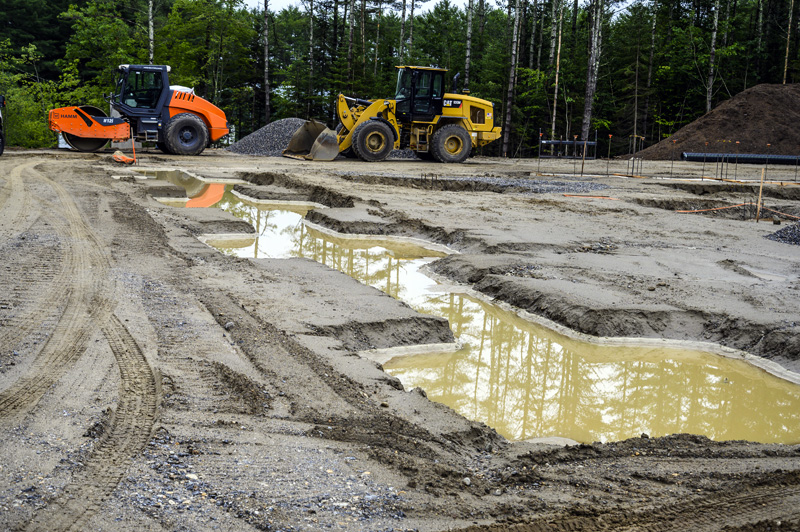 Construction vehicles are on hand to move dirt and gravel at the site of American Unagi’s future aquaculture facility in Waldoboro on July 19. The innovative structure will allow elvers, or baby eels, to be raised to full size in a land-based facility. (Bisi Cameron Yee photo)

Rademaker, who grew up fishing the steams of Indiana with her father, studied aquaculture at Auburn University in Alabama and worked in aquaculture facilities in Africa.

She landed in Maine as an AmeriCorps volunteer and fostered a network of knowledgeable and passionate individuals connected to Maine’s fisheries and to its growing oyster aquaculture. She quickly decided that Maine was the right place for her to start a land-based aquaculture business.

She had found her future. Now she needed to find her fish.

Her research led her to eels. “I love everything about eels,” she said. “From an aquaculture perspective they are an incredible fish to grow. They’re hardy and they do well in these systems. From a culinary perspective, they’re an incredible fish to eat. They’re connected to all of these cultures around the world. I have a huge amount of respect for this species that I grow.”

Maine is one of only two states that support an elver fishery, the other being South Carolina whose fishery is significantly smaller. 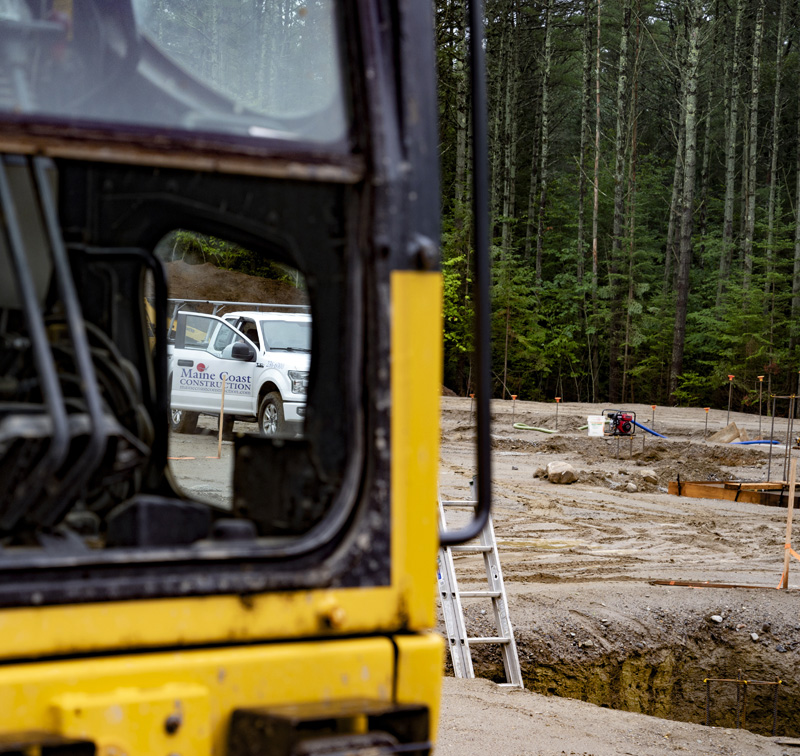 A Maine Coast construction truck is seen through the window of a construction vehicle in Waldoboro on July 19. The Camden company is the primary contractor for the construction of American Unagi’s Waldoboro facility. (Bisi Cameron Yee photo)

Elvers, or glass eels, are spawned in the Sargasso Sea which, according to the National Ocean Service, is the only sea without a land boundary. Once hatched, the elvers drift on ocean currents and ultimately wind up in freshwater rivers and streams all along the Atlantic coastline.

Around mid-March fishermen chosen by lottery descend on the rivers of Midcoast Maine, including the Pemaquid, the Medomak, and the Sheepscot. There they set large fyke nets to trap the elvers. Or scoop them from the chilly water with dip nets.

Prices for elvers have been known to top $2,000 per pound, with each pound containing approximately 2,500 juvenile eels.

Once caught, the young eels are exported to Asian countries like China and Japan where they are raised to full size and sold as a delicacy. The full-sized eels are also processed in Asia, filleted and seasoned with sugar and soy sauce, then frozen and returned to the US to feed the country’s growing fondness for sushi.

American Unagi plans to purchase 600 pounds of glass elvers annually. “That’s a blip of what the Maine fishery is, so there’s definitely opportunity to grow,” Rademaker said. In 2021, the quota for the elver fishery in Maine was set at 9,688 pounds. 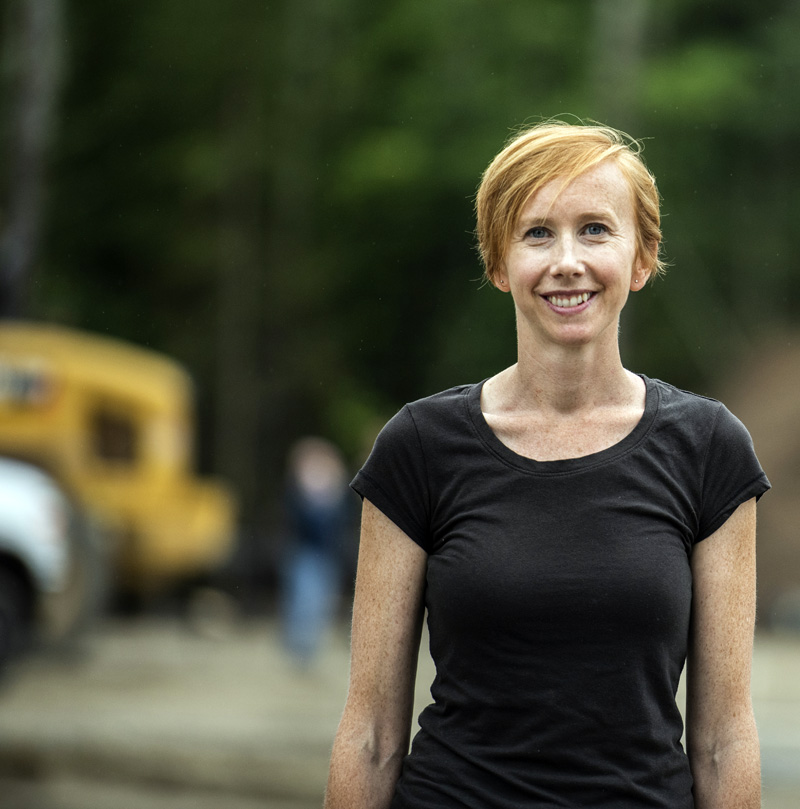 Sara Rademaker, founder and president of American Unagi, stands in front of the constuction site for her new facility in Waldoboro on July 19. The facility is slated to open in time for the 2022 elver season. (Bisi Cameron Yee photo)

Once it is operating at scale, Rademaker said the Waldoboro facility’s adult eel output will be in the range of 500,000 pounds, which represents approximately five% of the U.S. eel market.

The recirculating aquaculture systems facility in Waldoboro was designed by Netherlands-based ACE Aquaculture Consultant Engineering, a company that specializes in the design and construction of facilities for a variety of aquacultures, including eel farms and nurseries in Europe and Africa.

Maine Coast Construction, of Camden, whose experience with commercial steel buildings and cold storage facilities is particularly relevant, is managing the construction.

Rademaker said the facility, which was delayed due to COVID-19, should be operational by the 2022 elver season. 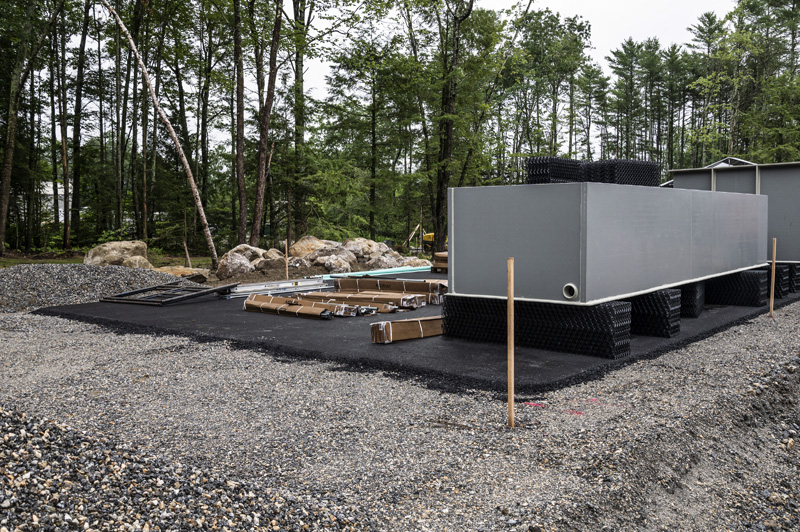 Large crates of material for American Unagi’s recirculating aquaculture systems are beginning to be unpacked in Waldoboro on July 19. The system was designed by Dutch firm Aquaculture Consultant Engineering. (Bisi Cameron Yee photo)

Rademaker sees her business as strengthening the local eel industry by having more people tied to it.

“It increases the economic value of the fishery to the state, but it hasn’t always been this valuable,” she said. “And it takes a lot of work to manage fisheries so there are a lot of states that don’t have the resources or really the need because their economies are based on other things.”

“It’s not an easy business to build,” she said. “Farming fish takes a certain skill set, understanding, and a lot of time to put together a facility that’s properly designed, properly permitted.”

“We looked at a facility size that made sense for the community, the fishery and the market. Everything has been very thoughtful with how we built this first facility,” Rademaker said. 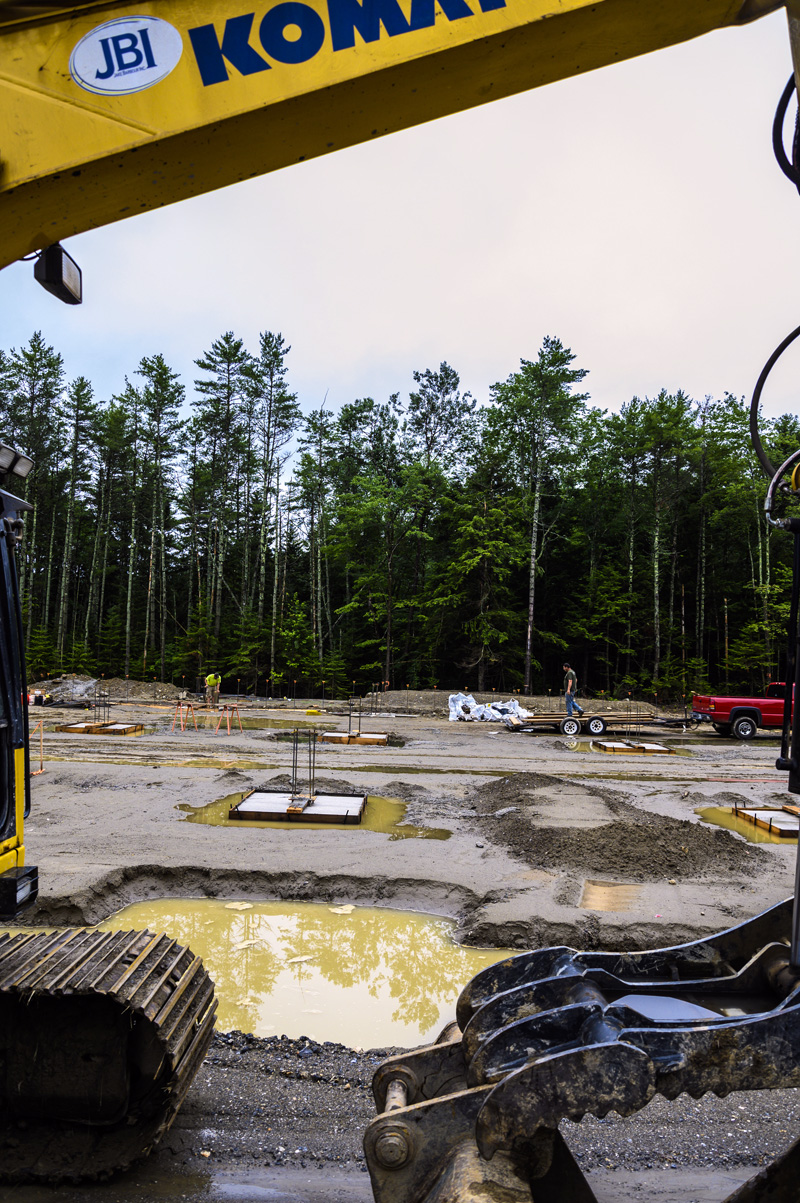 Workers prepare the ground for continuing construction on an aquaculture facility after a rainy morning in Waldoboro on July 19. The site was initially approved in early 2019, but construction was delayed due to COVID-19. (Bisi Cameron Yee photo)

American Unagi will bring 14 jobs to Waldoboro. While she is laser-focused on this facility, Rademaker doesn’t rule out the idea of expanding to a second facility in the future. “I’ll let you know,” she said.

The final product of American Unagi is available throughout the U.S. and has already been featured on menus in Maine. Rademaker said she’s been approached by a number of chefs who were pleased to see an opportunity for a local eel.

“A lot of people have recognized that the imported eels are not sustainable, that there’s a lot of uncertainty,” Rademaker said. “And because of that there’s a certain kind of chef that had taken it off their menu. Now they have an opportunity to get something local where I can tell them it came from this river, it was fished by this person, and the fishery is regulated. They love the fish. They just wanted a better source.”

And soon they will have one.

For more information about American Unagi, go to americanunagi.com.