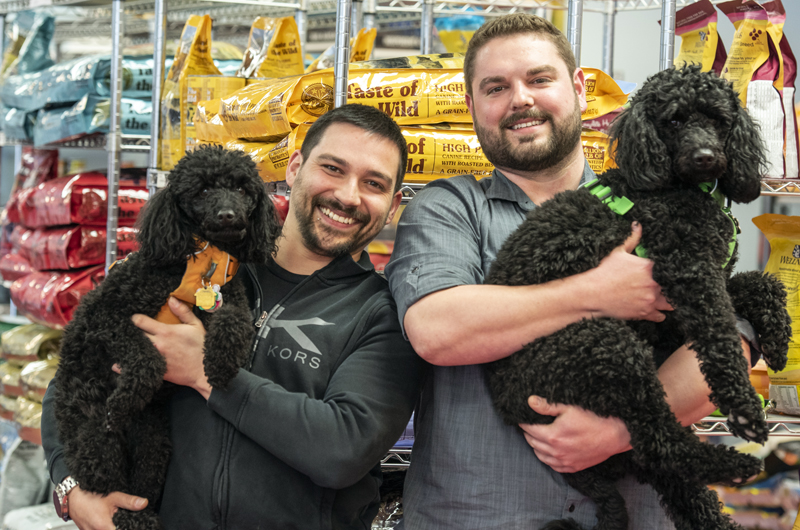 The Animal House, of Damariscotta and Westbrook, has new owners.

William “Will” Paul and Branden Perreault, of Dresden, purchased the business from founders Aubrey and Dan Martin in early April.

The Martins opened The Animal House in 2005 in the first floor of their home at the intersection of Hopkins Hill Road and Route 1 in Newcastle. The store had “a real country store feel to it” in the early days, Aubrey Martin said, and featured products and services not widely available at the time, such as natural pet food and nutritional consultations.

“We didn’t want to be a feed store or a PetCo,” Aubrey Martin said. “I think we carved out something really unique at the time, and we did it with a super-personalized service.”

The Animal House relocated to 372 Main St. in Damariscotta, now home to the karate studio MIKA Great Salt Bay, before moving to its current location at 15 Coastal Market Drive, where it has been for eight years. In 2014, The Animal House opened a second location in Westbrook.

Throughout the years, The Animal House has worked closely with local animal shelters and hosted adoption events. Two of the store’s biggest undertakings were the annual Woofstock event, which included pet care seminars, demonstrations, and vendors; and the 12 Woofs of Christmas program, which benefited animals during the holiday season.

When the Martins moved to Oregon more than three years ago, they remained involved in the operation of the store from three time zones away. Aubrey Martin, now a real estate agent with Keller-Williams, continued to handle the marketing for the business and would return to Maine a couple times a year, while store managers oversaw the day-to-day goings-on.

With three young children, however, Aubrey Martin said it soon became obvious the arrangement would not be sustainable. 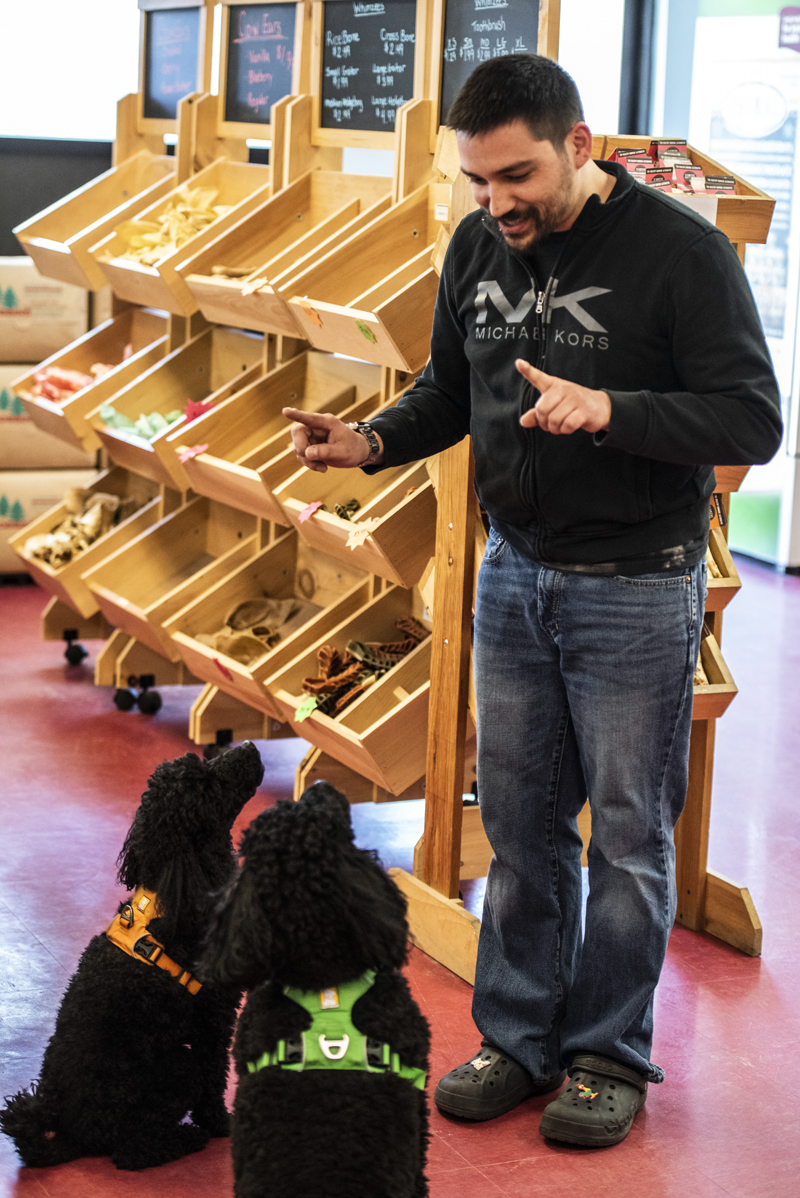 Wil Paul practices the “sit” command with his moyen poodles, Zara and Kona, at The Animal House in Damariscotta on Saturday, April 25. Paul joked that the treat-focused poodles are his biggest shoplifters. (Bisi Cameron Yee photo)

“We became painfully aware that it was just going to be too hard to keep going back and forth, and if something came up that was serious, we weren’t in a position to do very much in terms of being boots on the ground,” Aubrey Martin said.

It was around that time that Perreault, the store’s longtime bookkeeper, approached the Martins about buying the business. He and Paul were frequent customers, as the couple has two cats and two moyen poodles.

“It was something we lightly talked about for a while,” Perreault said. “(Aubrey Martin) was very conscientious about making sure her employees were OK and wanting it to remain a family-owned business.”

“When Branden first approached us with the idea of buying the stores, we weren’t necessarily on the market at the time, but we were realizing there was really only so much we could do from here,” Aubrey Martin said. “With retail, especially nutrition, it’s really important to be on the forefront of what’s new and what’s changing. And with our life out here, it became more and more difficult to do.”

“The only way stores cannot only survive, but thrive, is to have people there,” Aubrey Martin said. “And I feel really confident with the two of them. They have a lot of energy and enthusiasm, like I did when we started out, and it’s great to see.”

The sale was finalized April 6, shortly after the first person tested positive for COVID-19 in Lincoln County. As an essential business, The Animal House is open and serving its clients.

In response to the COVID-19 emergency, Paul and Perreault have introduced two new programs to help the community. The Sheltering-In-Place program provides food and supplies to area rescues, while Neighbor-to-Neighbor supports residents who need food and litter for their pets, Paul said.

“It’s important to continue the store’s core functions, but we’re also trying to help those who need it,” Perreault said. “We want to be as big a part of the community as possible.”

They look forward to continuing The Animal House tradition of supporting local animal shelters and hope to host adoption events at the stores in the future.

Paul and Perreault have split duties for the business. Paul can likely be found at either the Damariscotta or Westbrook location and runs retail operations, while Perreault handles the bookkeeping side of things. Perreault also works for the city of Brunswick as its deputy finance director, while Paul recently retired from coaching cheerleading.

After the COVID-19 emergency ends, Paul and Perreault plan to host an event to mark the change in ownership. In the meantime, they said, they have enjoyed working alongside Animal House employees and meeting clients.

“Everyone has been really nice and all have been very welcoming, and it’s made me excited that we took this step,” Paul said.

For more information about The Animal House, go to the animalhouse.net or find the store on Facebook.