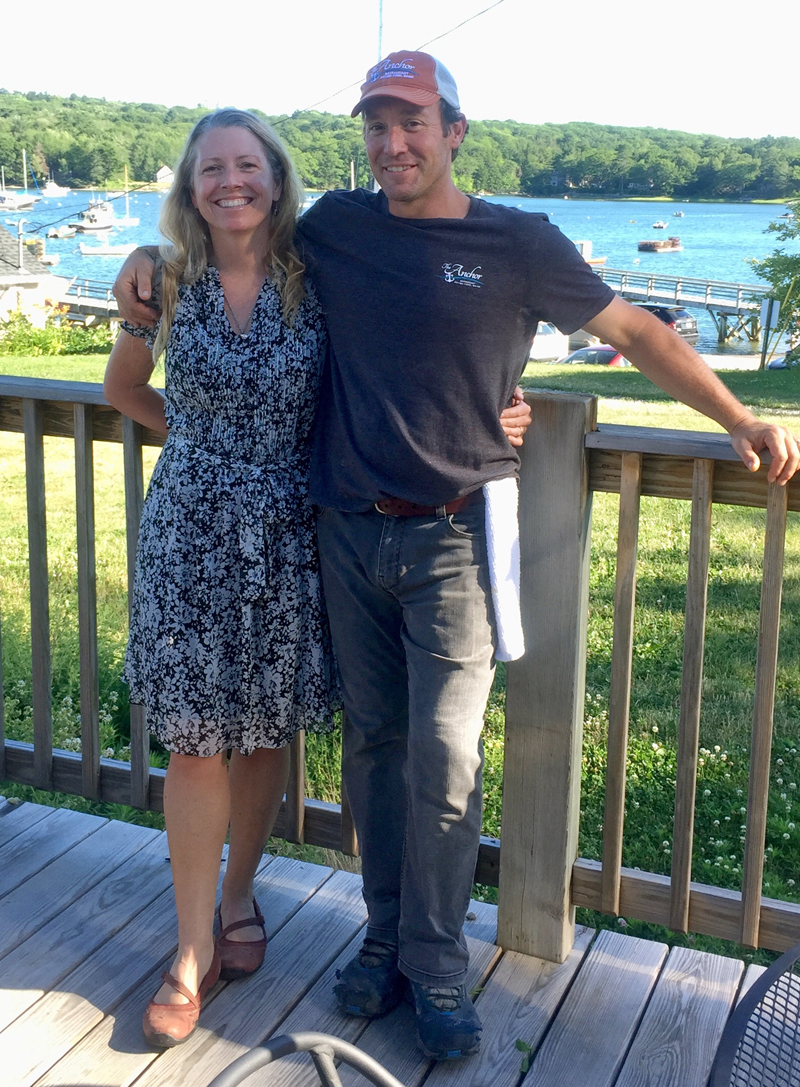 Andrea and Dan Reny on the deck at The Anchor. (Photo courtesy Andrea Reny)

As Andrea and Dan Reny enter their fourth season as proprietors of The Anchor, the Round Pond restaurant continues to undergo changes, including with the addition of live music this year.

The spacious interior of the restaurant might surprise a first-time visitor.  It looks nice enough from the outside, but appears much smaller than it really is.

The first room diners enter is the bar area, which the Renys renovated and expanded when they took over the restaurant. Modern blue lights hang from rafters in the raised ceiling, and new counter-high tables and chairs offer a fresh, clean, airy ambiance.

Andrea Reny oversees the restaurant. She said the bar area was only expanded a couple feet, but with the new bar, made of poured concrete, and the reconfiguration of the space, the room seems much larger.

The walk-in cooler was moved closer to the bar to make for shorter beer lines that produce less foam and colder beer, Reny said. The beers are all from Maine – except the PBR, or Pabst Blue Ribbon.

“It’s kind of the unofficial beer of Round Pond,” Reny said with a smile. “And we always have it on tap.”

The bar area leads to a large dining room with wall-to-wall windows looking over another, lower room with more tables and windows lining the entire front of the room, providing a view of the harbor.

The menu at The Anchor is as fresh and inspiring as the ambiance. Reny said much of the set menu and daily specials relies on local farms for produce, and most of the seafood is local.

On July 9, a special salad consisting of baby kale from Morning Dew Farm, with fresh mozzarella, tomatoes, avocado, balsamic glaze, and microgreens was offered. The presentation itself was a work of art.

“We’re trying to use as much produce from local farms as possible,” Reny said. “Pretty much everything in our salads is from New England, except the avocados. The clams come from Community Shellfish in Bremen, and haddock is wild-caught.”

Round Top in Damariscotta supplies the ice cream, and all desserts are made in-house. “We try to have a little variety – something fruity, something chocolaty,” Reny said.

The kitchen wasn’t originally in the renovation plans when the Renys took over the business, but as they started working on the building, it became apparent that it needed some fixes. The couple ended up redoing the whole kitchen.

Reny has nothing but praise for the kitchen crew at The Anchor. “It’s a team effort, and our team is solid,” she said.

New this year at The Anchor is a regular schedule of live music. Steve Vellani provides entertainment on Taco Tuesdays, and on Thursdays different musicians perform, including Steve Jones, of The Boneheads, and Sarah Crosby.

The Renys also own Muscongus Bay Lobster Co., on the wharf next door. Dan Reny has been running that business for 16 years. “If you don’t want to see your significant other, try having two businesses on the same property,” Andrea Reny said with a laugh.

The two don’t really compete against one another, as the menus offer different types of meals. “It’s apples and oranges,” Andrea said. “Down there it’s shore dinners, sandwiches, crabcakes – that sort of thing.”

Dan Reny is a grandson of R.H. Reny, founder of the family’s namesake chain of bargain stores. He took over Muscongus Lobster in 2002, when the Reny family was on the verge of selling it.

He had majored in aquaculture in college, and worked for Mook Sea Farms and a Wyeth aquaculture company.

“It was a big decision for Dan to move from his life in the aquaculture business to taking over one of the Reny family businesses,” Andrea said. “He felt a responsibility to his family and he needed someone to help him, so here I am.”

Andrea was a math and science teacher, and a backcountry guide in Alaska, before getting into the restaurant business.

The Renys live in Round Pond.

The Anchor, which seats around 120, is entirely handicapped-accessible. The restaurant serves lunch and dinner from May through Columbus Day. There’s a happy hour on weekdays from 4-6 p.m.