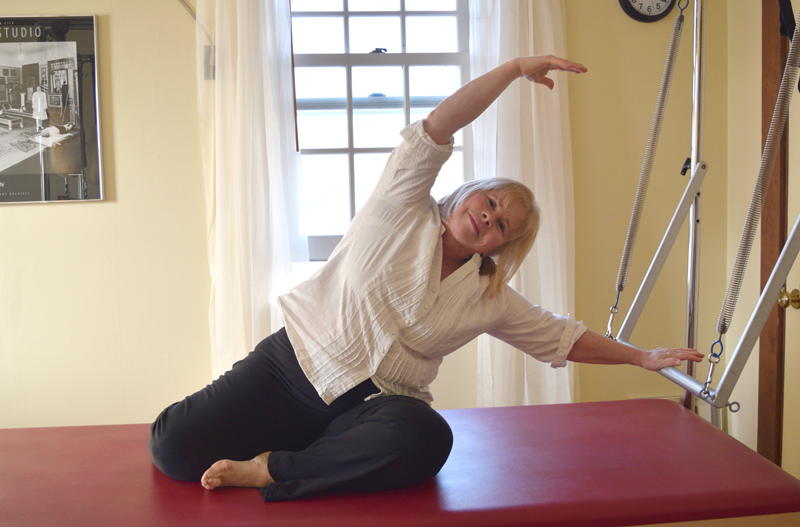 Exercise physiologist Dianne Daniels demonstrates a Pilates exercise on a piece of equipment known as a Cadillac. (Jessica Clifford photo)

A Pilates studio has moved from Boothbay Harbor to downtown Damariscotta, where it offers private and semi-private sessions on the second floor of the Weatherbird building.

Daniels previously owned Pilates Studio of Boothbay Harbor, at 115 Townsend Ave., from 2010 until she closed just a few days before moving to her new location. The Boothbay Harbor building had been put on the market.

Daniels said she moved her business to Damariscotta because it offers more opportunity for year-round clientele than Boothbay Harbor.

“I liked the vibes of the building and it had enough space,” she said of why she chose her new location, which had previously been a Pilates studio.

Although Daniels is the sole owner and operator of the studio, she is interested in speaking to qualified Pilates instructors or people who want to become qualified about renting the space when she is not using it.

Daniels previously lived in Manhattan, where she was a fundraiser for national nonprofits. While there, she saw an advertisement for a month-long certification process to become an aerobics instructor. During that process, she learned about exercise physiology and decided to go to school for it.

She received her master’s degree in exercise physiology from Columbia University. She also has three Pilates mat certifications and two Pilates equipment certifications, as well as a background in holistic nutrition.

She taught various yoga, body-sculpting, step, and Pilates classes in Manhattan. She has decades of experience in the wellness field.

Her favorite part of her job is seeing her students progress. 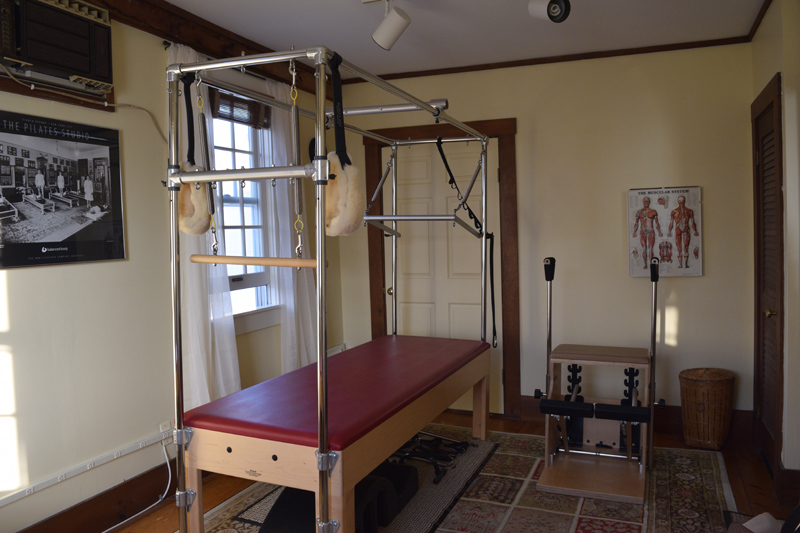 Two pieces of Pilates equipment at Pilates and Feldenkrais Studio in Damariscotta: the Cadillac (left) and the chair. (Jessica Clifford photo)

“You feel better in your body. You have more energy, you have more confidence, your mood is lifted,” she said of Pilates.

Daniels has written two books – “Exercises for Osteoporosis: A Safe and Effective Way to Build Bone Density and Muscle Strength and Improve Posture and Flexibility” and “Pilates Perfect: The Complete Guide to Pilates Exercise at Home.” Both can be purchased online.

Pilates is a full-body fitness program developed in the early 20th century by Joseph Pilates. The program uses equipment and mats on the floor.

“Everything you do in Pilates works to tone and strengthen the abdominals and the back musculature,” Daniels said.

Pilates has a lot of similarities to yoga, which came first, according to Daniels. However, Pilates involves more movement and can include equipment.

Another service offered at the studio is hands-on Feldenkrais on a table.

Feldenkrais uses gentle and safe movement patterns that, over time, lessen aches and pains and improve posture and flexibility.

“With Feldenkrais I’m trying to access your nervous system. I’m trying to get your brain to go back to a place where it knew how to move correctly,” Daniels said.

Typically people attend a Feldenkrais class because they need help with problems in parts of the body, such as the joints, and want to try a different approach. There are two ways to do Feldenkrais: with a group instructor or a hands-on moving of limbs.

“I always introduce people to Feldenkrais if they say they have some sort of issue, some musculoskeletal (issue). I’ll incorporate some Feldenkrais, especially at the end of a (Pilates) session,” Daniels said.

Moshe Feldenkrais, a Ukrainian-Israeli engineer and physicist, is known as the founder of the Feldenkrais Method. According to Daniels, it is less known in the U.S., but is used much more in Europe and Australia. 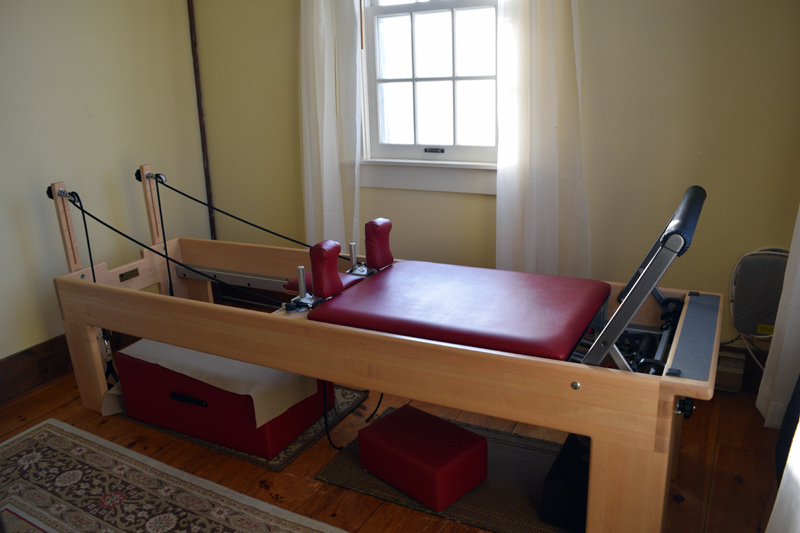 The reformer, a piece of Pilates equipment at Pilates and Feldenkrais Studio in Damariscotta. (Jessica Clifford photo)

Pilates and Feldenkrais Studio offers variety, Daniels said, because she has four types of Pilates equipment, known as the reformer, the Cadillac, the chair, and the arc. She does not teach a Pilates class on a mat.

“I can see you five, six, seven times and not give you the same exercises twice,” Daniels said.

One of the misconceptions people have about Pilates is that it is too hard, but Daniels said it can be geared to any level, from the less active beginner to the athlete.

“I think of Pilates as a real foundation to get before you go on and do any other sport or activity. It teaches you how to use your body correctly,” she said.

Pilates is safe under the guidance of an instructor because a person’s form can be corrected to avoid strain, Daniels said.

A duet, or two-person session, costs $100 and is only offered for Pilates.

The studio is open from 8 a.m. to 6 p.m. Monday-Friday. Weekend sessions can be arranged.