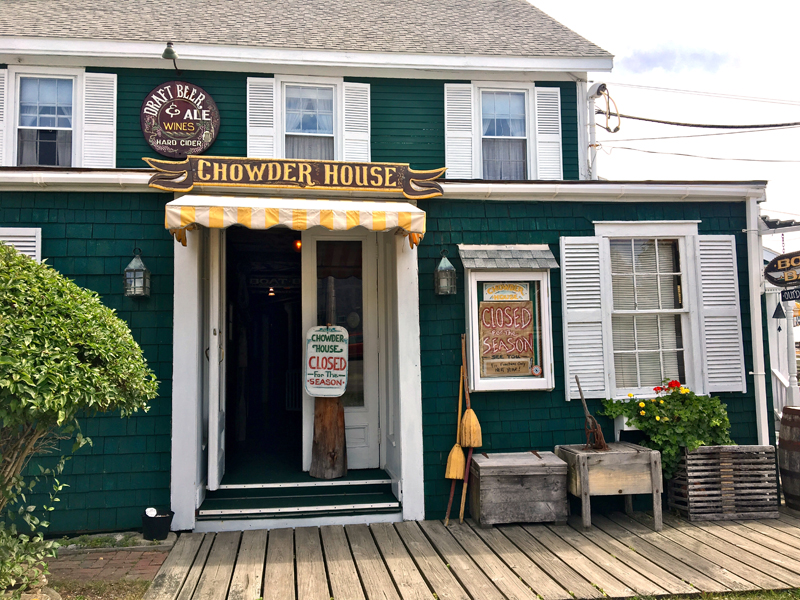 The iconic Chowder House, at 22 Granary Way in Boothbay Harbor, has closed its doors after 40 years in business.

On Sept. 3, owners Bob and Sally Maroon held a closing party for all the loyal customers and friends who have patronized the restaurant and bar that sits over the harbor.

Bob started renting a small space in the building in 1974 for a wood workshop, where he was in high demand, making wood carvings and custom orders.

When the building, built as a granary in 1840, became available in 1978, shortly after the couple married, they bought it. Bob felt he had no choice. “I had to buy it. I needed a place for my workshop,” he said. “My wood shop was doing great.”

Soon, all nine spaces he had divided the building into were rented to small businesses. Bob decided there should be some kind of food in the mix. “What better than some good New England clam chowder?” he said. “Irene’s (restaurant) inspired me. She was awesome.” He made a big potful, and the rest is history.

The building was lacking in doors and windows. A self-described scavenger, Bob started collecting “treasures” to incorporate into his new building. “I went to the dump and picked up all the building materials and junk I needed, and slammed it together,” he said.

“He repurposed before it was popular,” Sally said. “He went to junk shops and tore down boathouses to get what he needed.” Windows in the dining room and adjoining kayak shop came from Hendrick’s Head Lighthouse.

Bob paid $2 each for the chairs in the restaurant. “I rebuilt them and painted them, and they’ve lasted for 40 years,” he said. He built 12 tables one night. They’re still in the dining room. “He was working around the clock,” Sally said. 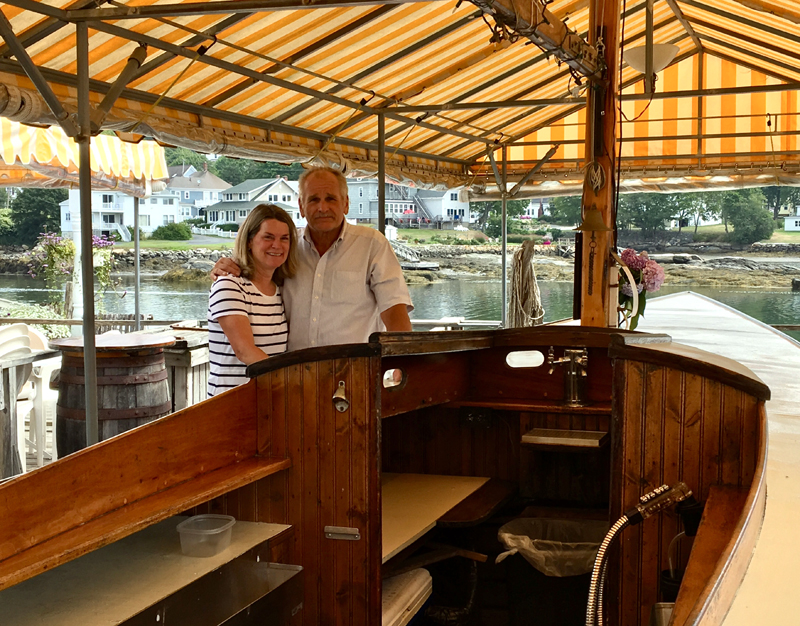 Eventually the Maroons took over the entire space. Bob has made clam chowder every day from mid-June to mid-September for 40 years. “It started by mistake, and I still don’t want to do it,” he said, laughing. “Every morning starting at 4:30 I made 5 gallons, and more when it ran out.”

The interior of the building is full of artifacts and curiosities. A large bronze hinge hanging on a post was given to Bob by the captain of the Bounty shortly before it left Boothbay Harbor in October 2012. The ship sunk, taking the captain down with it.

A favorite spot at the establishment has been the Boat Bar, on the wharf next to the building, where the hull of a sailboat was converted into a bar. Bob paid $50 for the boat. A large yellow-and-white awning was custom-made to shelter it.

In the 40 summers they have been running the Chowder House, the Maroons have taken one day off – the day Sally’s brother died. “Bob gets up at 4:30 and I go to bed at 2,” she said. “Seven days and seven nights, nonstop.”

For 26 of those 40 years, the couple employed 36 people and fed 400-500 customers a day. “We were turning the tables over like crazy,” Bob said. Fourteen years ago they downsized the dining area and the number of employees to 10. “This has been much more fun, and so much easier.”

Jimmy Cliffe, now a principal at a Lewiston school, cooked at the restaurant for 14 years. He called Bob on the night before closing day and asked if he was making chowder. Bob said he was. “He said, ‘I’m coming down to make it with you,’” Bob said. “He got here at 6 in the morning, and we were the only ones in the kitchen. It was a brush with nostalgia.” 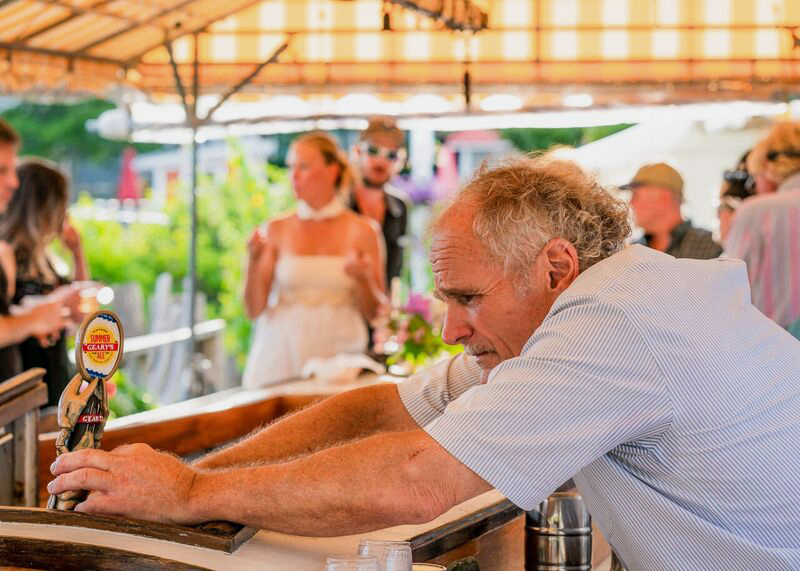 Bob Maroon pours one of the last beers served at the Boat Bar during a post-closing party Sept. 4. (Photo courtesy James Newton)

The Maroons have mixed feelings about closing their restaurant. They said they will miss their staff and the many good friends they’ve made over the years, but they’re ready to back off from the daily grind.

Several celebrities have patronized the Chowder House over its 40 years, including Christie Brinkley and Billy Joel, who returned with their daughter years later. Others have included Steven Spielberg, Walter Cronkite, Ted Kennedy, and U.S. Sen. John Tunney, son of the boxer Gene Tunney.

John Tunney, who was a regular, died in January. Eight members of his family went to the restaurant on closing night after sprinkling his ashes. “They were our very last customers,” Bob said.

The couple will spend this winter, as they have for many years, in Whitefield, N.H., where Sally is from. Bob will pack up his woodworking tools for transportation to his workshop there.

Bob said he never wanted to own a restaurant. “I just wanted a place to do my woodworking,” he said.

“But we’re going out on a high note,” he said. “All the people who worked here and the people we’ve met were phenomenal.”

The Chowder House is not being sold, yet anyway. The Maroons plan to rent out the space for private functions next summer. For more information, go to chowderhouseinc.com, email chowderhouseinc@hotmail.com, or call 633-5761.