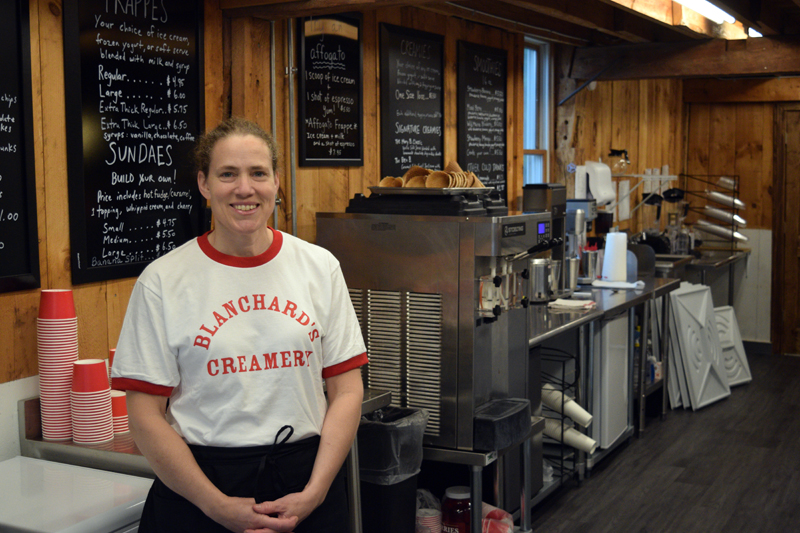 Mary Blanchard stands in Blanchard’s Creamery, the ice cream and coffee shop she opened in Edgecomb over Memorial Day weekend. With free Wi-Fi and a cozy barn interior, Blanchard wants her business to be a summer hub in Edgecomb. (Nate Poole photo)

Opening an ice cream shop in Maine might seem like a left turn for a Boston-based social worker with her own private therapy practice, but Mary Blanchard doesn’t see it that way.

“I like change, I like new challenges, I’ve always loved baking, and I do tend to eat frozen desserts almost every day,” Blanchard said. “I’m not someone who could probably do the same thing every day for the rest of my life.”

Blanchard’s Creamery and Coffee Shop opened over the Memorial Day weekend and will be open every day this summer from 8 a.m. to 8 p.m. Morning to evening hours may seem strange for an ice cream shop, but Blanchard’s also offers cafe, bakery, and smoothie items.

Blanchard was inspired by J.P. Licks, a successful coffee and ice cream franchise with locations throughout the greater Boston region, where she noticed customers would hang out all day at the venue. 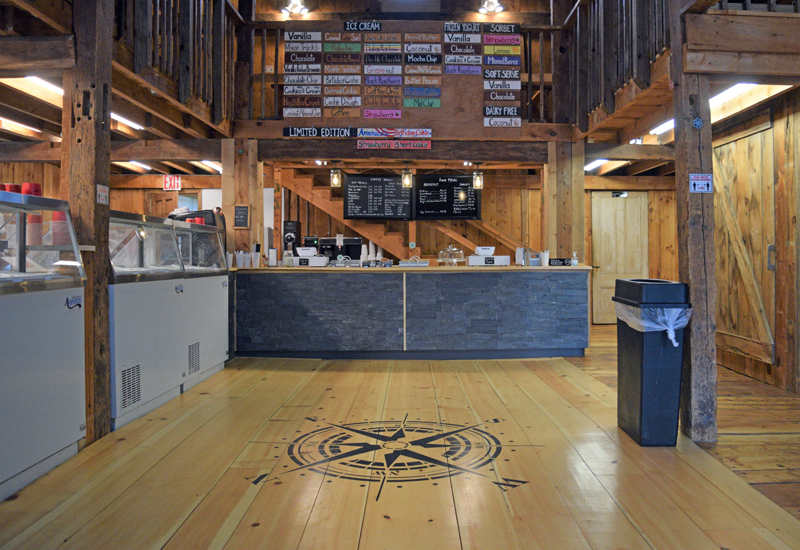 A sign above the counter at Blanchards Creamery advertises the 30-plus flavors available at the Edgecomb shop. In addition to ice cream, Blanchard’s Creamery offers baked goods, coffee, and smoothies. (Nate Poole photo)

Offering free Wi-Fi and a large barn with first floor and balcony seating, Blanchard is aiming to leverage her creamery as a community hub for the summer season.

While Blanchard’s practice, her partner, Theresa Brophy, and her son are still in Boston, she is very much rooted in Lincoln County. Blanchard grew up in Newcastle, her father, Mac Blanchard, was a builder in the Damariscotta area, and her mother continues to live in Edgecomb.

It was while Blanchard was staying with her mother during the height of the pandemic last summer with Brophy and her son when she happened upon the barn at 660 Boothbay Road in Edgecomb.

She had been considering purchasing an already existing ice cream shop in Massachusetts two years ago, but came up empty in her search. Seeing that the barn was up for sale, Blanchard saw an opportunity and took it.

“So I came and looked at it, and the second I walked in I was like, ‘Oh my god, this is it,’” Blanchard said. “Like, what a great place to have a cup of coffee and have an ice cream.”

Renovating the new space was a significant undertaking in and of itself, with all of the interior-design work taken on by Blanchard, Brophy, and Blanchard’s sister. Blanchard really wanted patrons to enjoy the aesthetic and the architecture of the barn itself when they walked in.

Having run her own practice for about 20 years, Blanchard said that she likes being her own boss. While she’s never owned a food establishment before, Blanchard is ambitious, a self-described “foodie,” and unafraid of trying something new. This extends not only to selling ice cream, but making it. 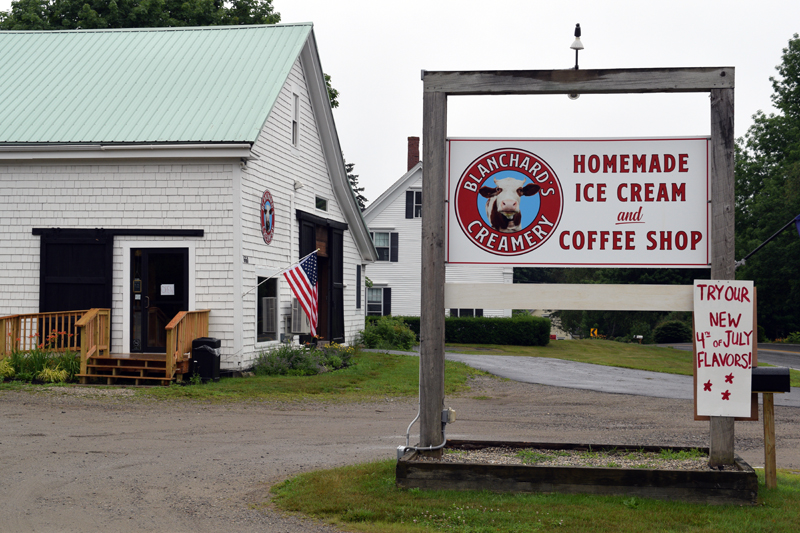 The sign for Blanchards Creamery at 660 Boothbay Road in Edgecomb. Owner Mary Blanchard first happened upon the barn that would become her ice cream and coffee shop on a bike ride from her mother’s house a year ago. She said she knew it would be perfect the second she walked in. (Nate Poole photo)

Blanchard’s ice cream is slow-churned, which makes it creamier and thicker. She said that when ice cream is churned quickly, it’s called “overrun,” meaning that there is a lot of air in the ice cream. Since it’s easier and more efficient to churn quickly, many commercial products found in supermarkets are overrun, causing them to be thinner and melt easily.

Blanchard also takes a certain peace of mind from knowing exactly where her product comes from.

“When you make small batches and you make it daily, it’s very, very fresh and you get to see everything that’s going into it,” Blanchard said.

With more than 30 flavors, Blanchard’s Creamery has much of the standard fare that one would expect at an ice cream shop, but also some signature flavors that Blanchard made up on her own, such as blueberry cobbler, which includes oatmeal, cinnamon, and blueberry compote.

In the process of starting her business, Blanchard has successfully juggled interior design, ice cream and pastry making, and business development, but that doesn’t mean there haven’t been hiccups and learning opportunities along the way. Blanchard said that she wishes she’d had a better understanding of how to work with distributors three months ago. 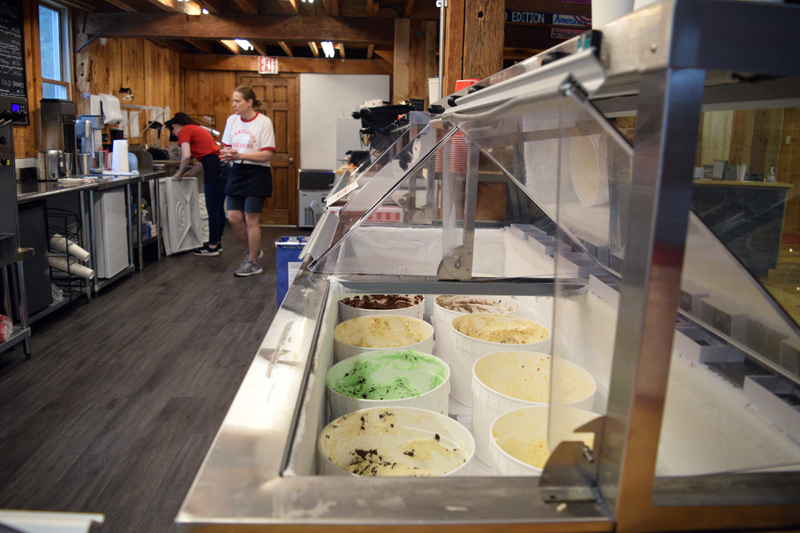 Ice cream tubs fill a cooler at Blanchard’s Creamery in Edgecomb. The ice cream, which is made in-house, is slow churned in small batches, making it thicker and creamier than most mass-produced supermarket ice cream brands. (Nate Poole photo)

While Blanchard’s Creamery is currently only a seasonal venture, Blanchard is hoping to stay open on weekends through the fall, depending on how staffing shakes out. Currently the shop relies almost entirely on students from Lincoln Academy on their summer break.

“I love them, I really do,” Blanchard said. “It’s an easy sell for a first job.”

Blanchard is currently working on an event for later in the summer that will feature live music and take advantage of the spacious lawn behind the barn. For now, she is happy to continue focusing on her burgeoning business and creating the best customer experience she possibly can.

“Why ice cream? Because it’s fun. People don’t come in here grumpy. And if they do they don’t leave grumpy,” Blanchard said, laughing.