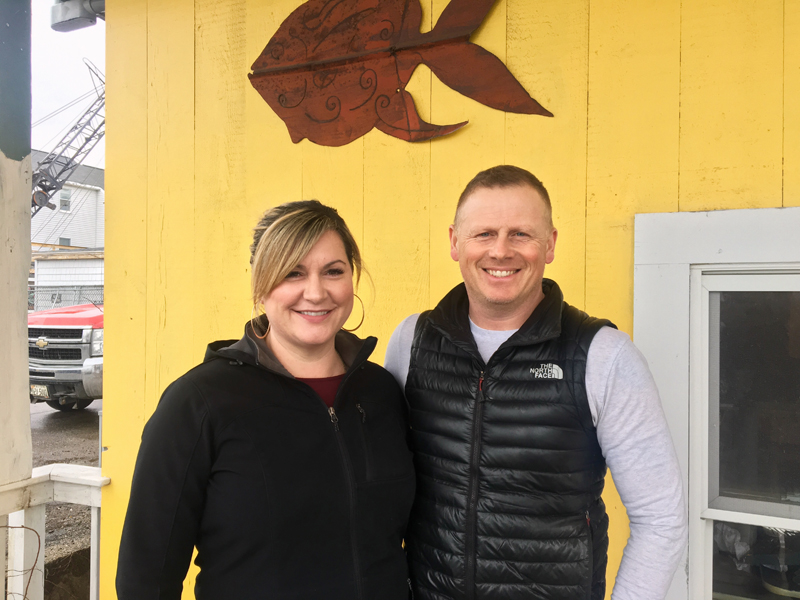 Cerina Leeman and Paul Leeman III on the deck of the former Van Lloyd’s Bistro in downtown Damariscotta. The Leemans will open a cocktail bar, BPL, in the space next month. (Suzi Thayer photo)

Cerina Leeman and Paul Leeman III, of Round Pond, will open a cocktail bar in the space formerly home to Van Lloyd’s Bistro, at 85 Parking Lot Lane in downtown Damariscotta, in May.

The couple is leasing the space from Malcolm Oliver. Meredith King, who owned Van Lloyd’s Bistro with her father, Gary King, closed her business Jan. 1.

The new cocktail bar will feature craft cocktails, a popcorn machine, and some light fare. The name will be BPL, for back parking lot, as it faces the municipal parking lot overlooking the harbor.

A cocktail bar is unusual for Lincoln County. “There’s one in Thomaston and several in Portland, a wine bar in Brunswick, and we have a favorite we go to in Bar Harbor,” Cerina said.

Maine law requires any establishment that serves liquor to offer some type of food, but the couple explained that their new cocktail bar will not be a restaurant that serves meals. “This will be a place where people can come before and after dinner for a cocktail, and maybe a snack,” Paul said.

“It will be a nice place to go for cocktails,” Cerina said. “We won’t offer a menu, but we’ll always have food available.”

The baker from The Harbor Room restaurant in New Harbor, Cerina’s other business, will help out at the new establishment, making flatbreads and other small baked items.

Craft cocktails will be the main focus of the cocktail list at BPL. “They’re very popular at The Harbor Room, and that seems to be the way things are going in bars now,” Paul said.

The couple is working on some renovations to the space, giving it more of a modern, industrial feel, and Paul is in the process of building the new bar, with barn board facing and concrete top, that will seat 10.

Plans include a few high-top tables on the outside deck and seating for 10 or 12 at tables inside.

Walls will be adorned with old signs, some from the Samoset in New Harbor, a predecessor to The Harbor Room that was run by earlier generations of the Leeman family. “We want to show some homage to places from the past,” Paul said.

Paul said the couple is working with Luke Davidson, of Maine Craft Distilling in Portland. “He grew up in the area, and we plan on using their products, as well as those from Split Rock Distilling in Newcastle,” he said. “We want to work with some local businesses.”

Along with the new cocktail bar, Cerina will continue to operate The Harbor Room. She started that business with her friend Taylor Corson, who left the partnership last year.

Paul, a building contractor, will continue to operate his company, Ledgewalker Builders.

BPL will be open for before-dinner cocktails, and later, for customers coming in after a movie and dinner.